“The Play that Goes Wrong” is Hilarious - Review by Carol Moore 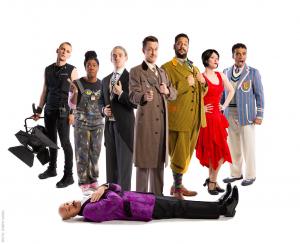 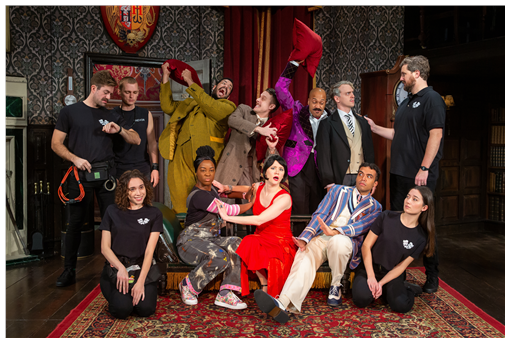 Just a note: before I started reviewing professional theater, I spent at least ten years reviewing community theater.  While most plays were well done, there were some that … enough said!  I think I laughed so hard at this play because I’ve seen, first-hand, many of the disasters that befell this company, although rarely in the same play.  You have to admire this hapless cast – at the same time you’re laughing at them.  They just keep on keeping on while everything around them quite literally falls apart.

The comedy starts well before scheduled curtain time.  Someone (it turns out that her name is Annie) wanders through the audience asking if anyone has seen a dog.  On stage, the crew is scurrying about, finishing the set.  When Annie needs some help, she drafts a man from the audience, pulling him up to the stage where she has him holding the fireplace mantel in place while she runs for a tool.  Meanwhile, Trevor asks him to hold the door closed with one hand, the mantel with the other. 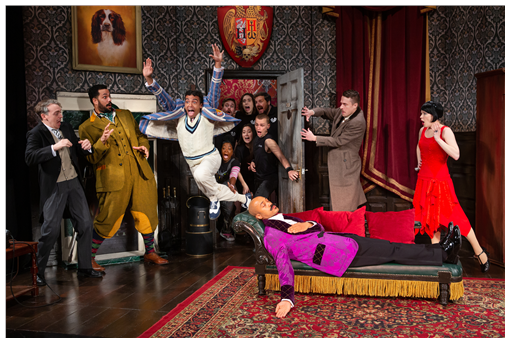 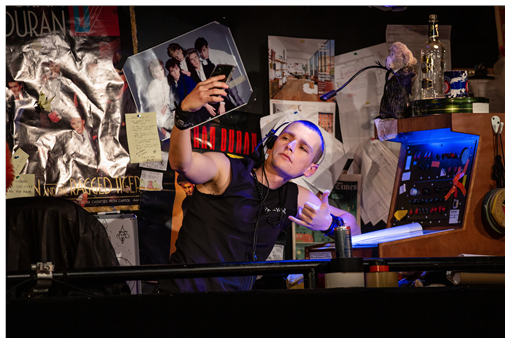 After Trevor, the stagehand, takes a seat at a control panel in a tiny balcony just off stage, Chris strolls on stage to announce that the Cornley University Drama Society is proud to be staging a play called Murder at Havisham Manor, which he’s proud to be directing.  After giving a bit of company history – and some difficulties they might have had in the past, he mentions that this play might be a teeny bit ambitious for them but he’s sure they’re up to the challenge! 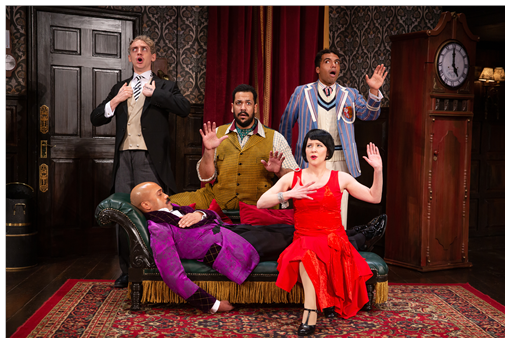 Perkins, the butler, enters the room, he assumes that his employer, Charles Haversham, is dead and summons his fiancée, Florence Colleymoore, his brother, Cecil Haversham and her brother, Thomas Colleymoore.  Since the death might be murder, they call the police.

The play is hilarious, what with actors overacting, mispronouncing words – often written on an actor’s hand, multiple pratfalls, spit takes, and collapsing sets – and then you have to figure out whodunit. 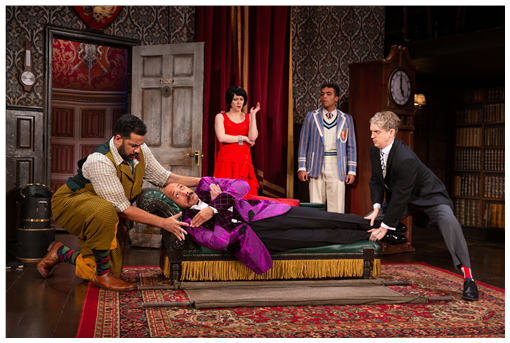 Some of my favorite disasters: 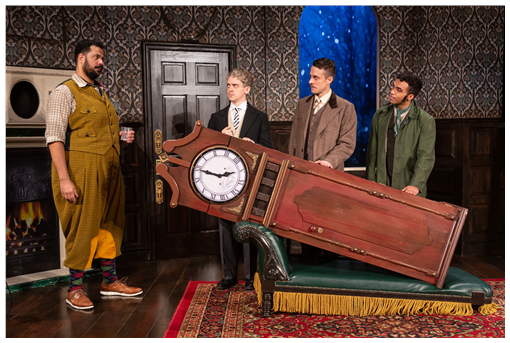 The Play that Goes Wrong runs through January 30th at Broadway In Chicago’s Broadway Playhouse at Water Tower Place, 175 E. Chestnut St., Chicago.  Parking is available at a reduced rate with a validation, available at the box office or from an usher.    Running time is 2 hours with an intermission.