Joffrey Ballet's "The Nutcracker" is Breathtaking! - Review by Carol Moore 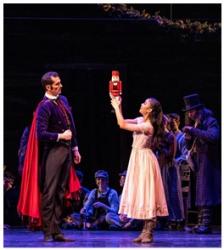 ***** Highly Recommended ***** The Joffrey Ballet’s “Chicago-centric” version of The Nutcracker, choreographed by Christopher Wheeldon, is quite simply magnificent. By setting “The Nutcracker” against Chicago’s Columbian Exposition of 1893, Wheeldon gave the city a unique gift.  This was the fifth time I’ve seen/reviewed The Nutcracker and I still love everything about it!  I did notice that a few things which were just slightly different, which actually improved on something that I thought was just about perfect.  Every movement was graceful, precise and exquisitely performed.  By the way, Tchaichovsky’s glorious music was played by the Lyric Opera Orchestra conducted by Scott Speck, the Joffrey’s Music Director.  4 BIG Holiday Spotlights! 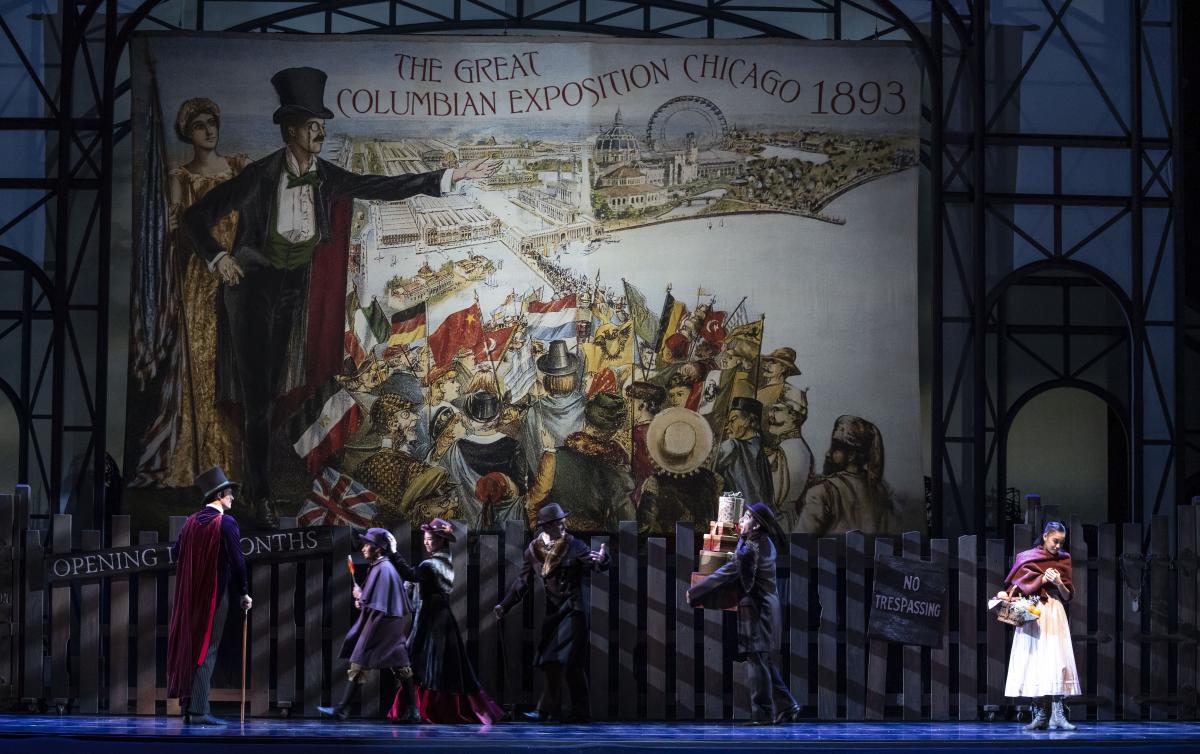 Please note: as you read through my review, please understand that the dancers I saw performing might not be the same at your performance.  In fact, different casts will alternate in the leading roles throughout the run.

For my Northwest Indiana readers: I’ve mentioned before that one member of the Joffrey company, Evan Boersma, is the son of Kelly Boersma, principal of Frank H. Hammond School in Munster.  In this production, he dances as a Toy Soldier and one of the Spanish dancers.

As the lights dim, The Nutcracker logo is replaced by projections of real Chicago posters and newspaper headlines/stories proclaiming the Columbian Exposition – the Chicago World’s Fair. One of those headlines just happens to mention that building the Fair is creating jobs for immigrants.

The Great Impresario of the Fair (Dylan Gutierrez), flourishing his cape, assisted by Peter (Hyuma Kiyosawa), his apprentice, shows VIPs around the site, also pointing out important features on a model. Outside the site, people go about their business, passing the fences around the construction. 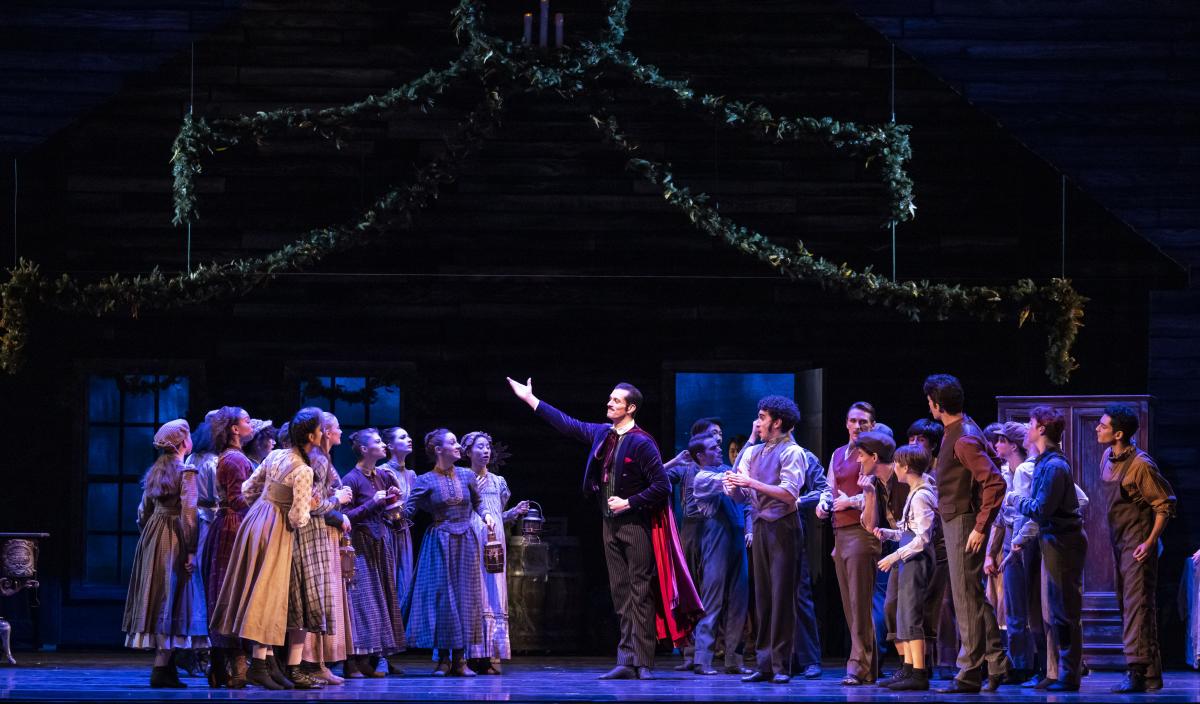 Some teenaged boys (Fernando Duarte and Xavier Nuñez) have managed to sneak onto the grounds. After crawling out through the fence, they jostle each other around as Peter passes by pulling a wagonload of packages.  Franz (Oliver Reeve Libke) steals a tall, red box.  His older sister, Marie (Yumi Kanazawa), tries to grab it, but he tosses it to one of the boys and they play keep-away.  Hiding the package under his jacket, Franz takes it home.

At home, their Mother (Jeraldine Mendoza) has been working on a sculpture for the Fair.  When the children come home, Franz hides the package in a cupboard while Marie helps Mother get ready for the holiday potluck she’s hosting. 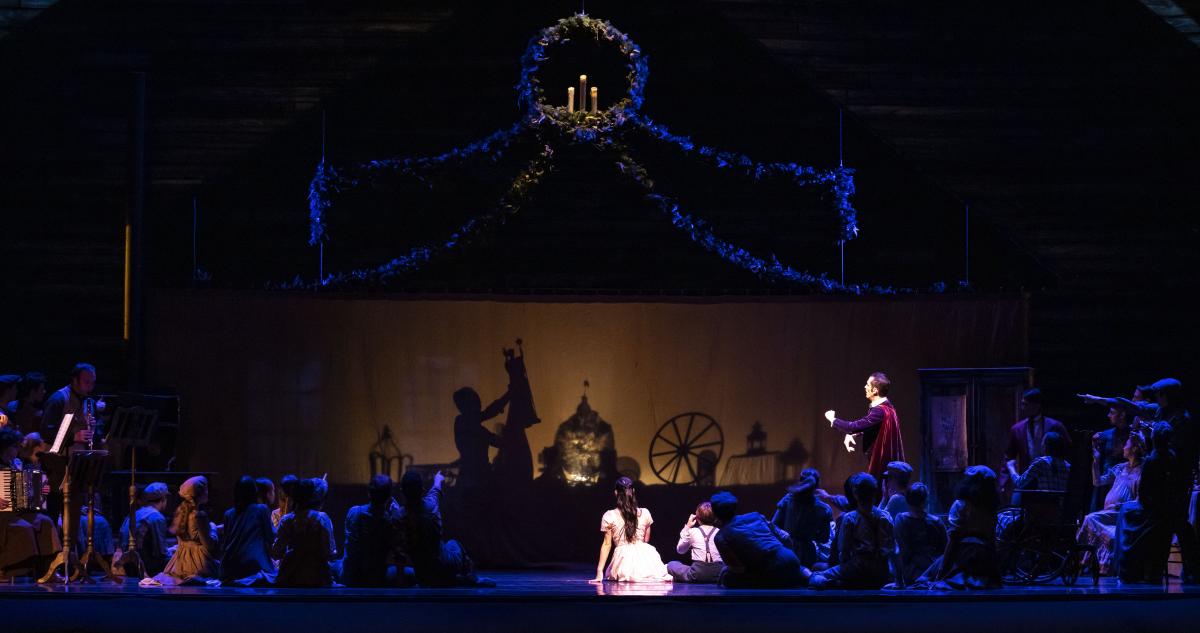 The Great Impresario projects a silhouette of the Fair, entertaining the workers with a glimpse of what they’re building. With Peter’s help, he rewards the workers with bonus envelopes, then he gives each child except Marie a gift. When he gives Marie a very familiar red box, Franz runs to check the cupboard, which is empty. Marie is thrilled with her nutcracker until Franz knocks it to the floor, breaking it. When the Great Impresario fixes it, Marie hugs him. 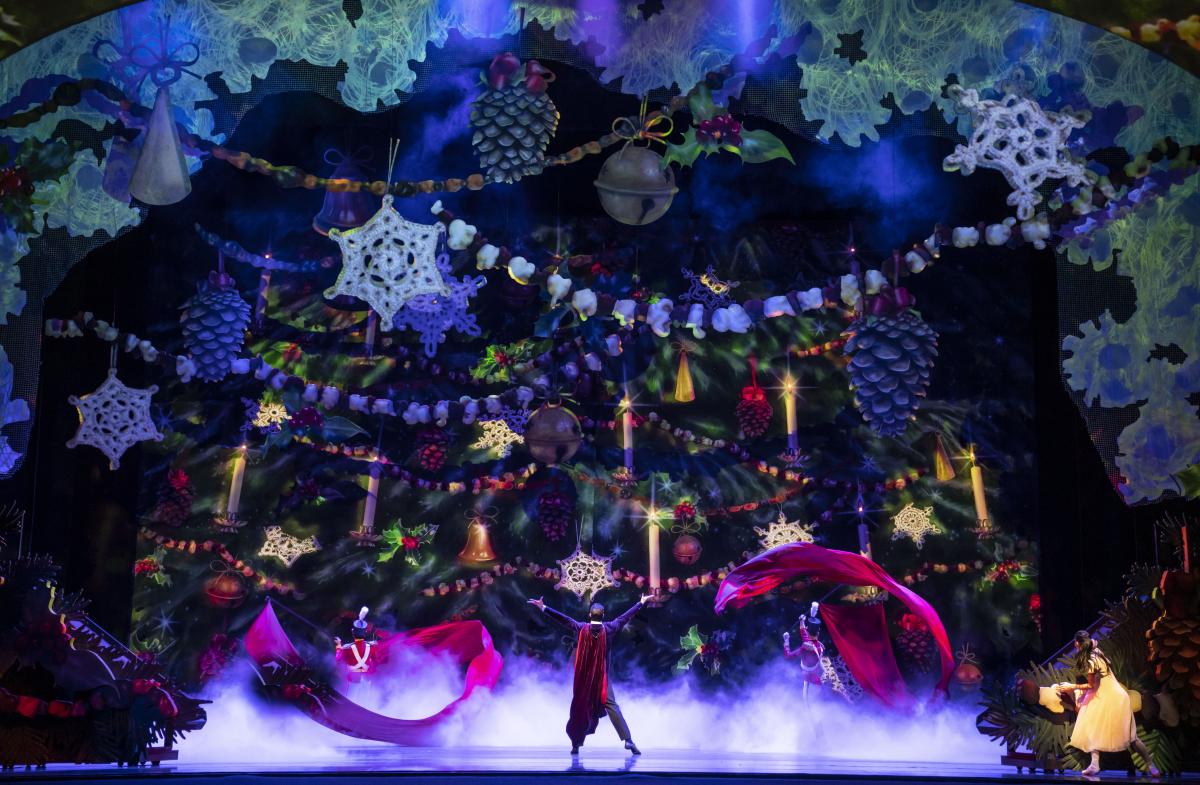 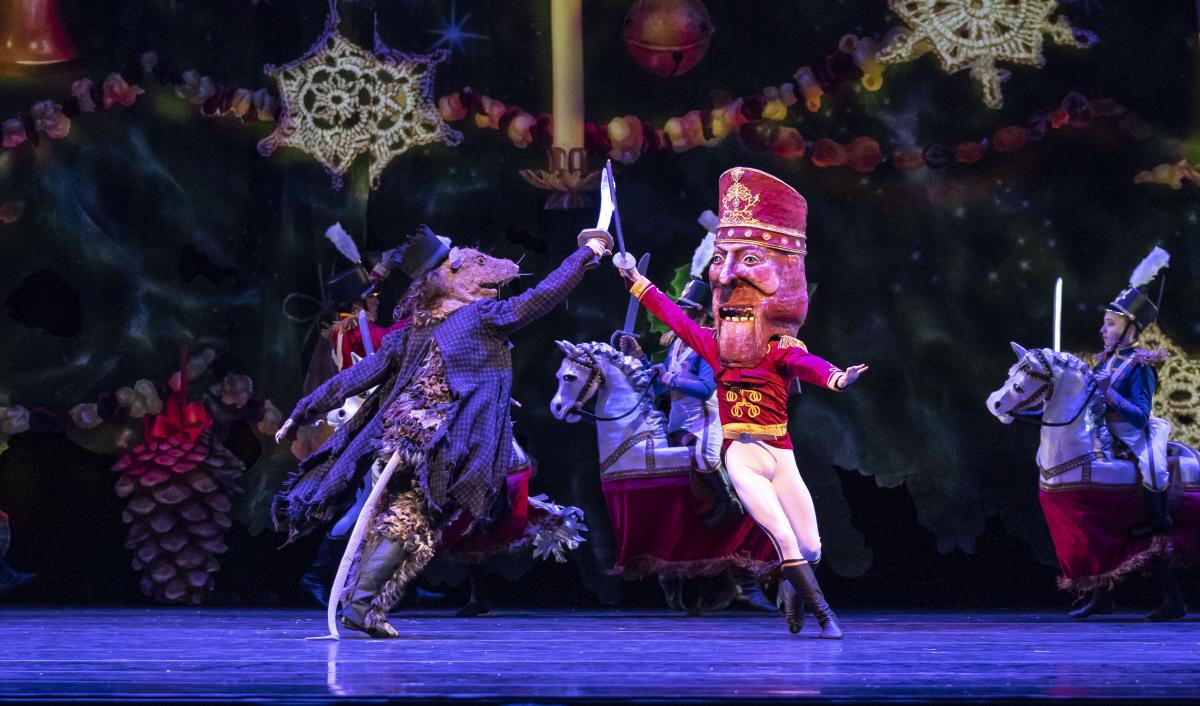 The Nutcracker miraculously transforms into a real Prince and the Great Impresario appears, whisking Marie and the Prince into a giant sleigh which bore them away. 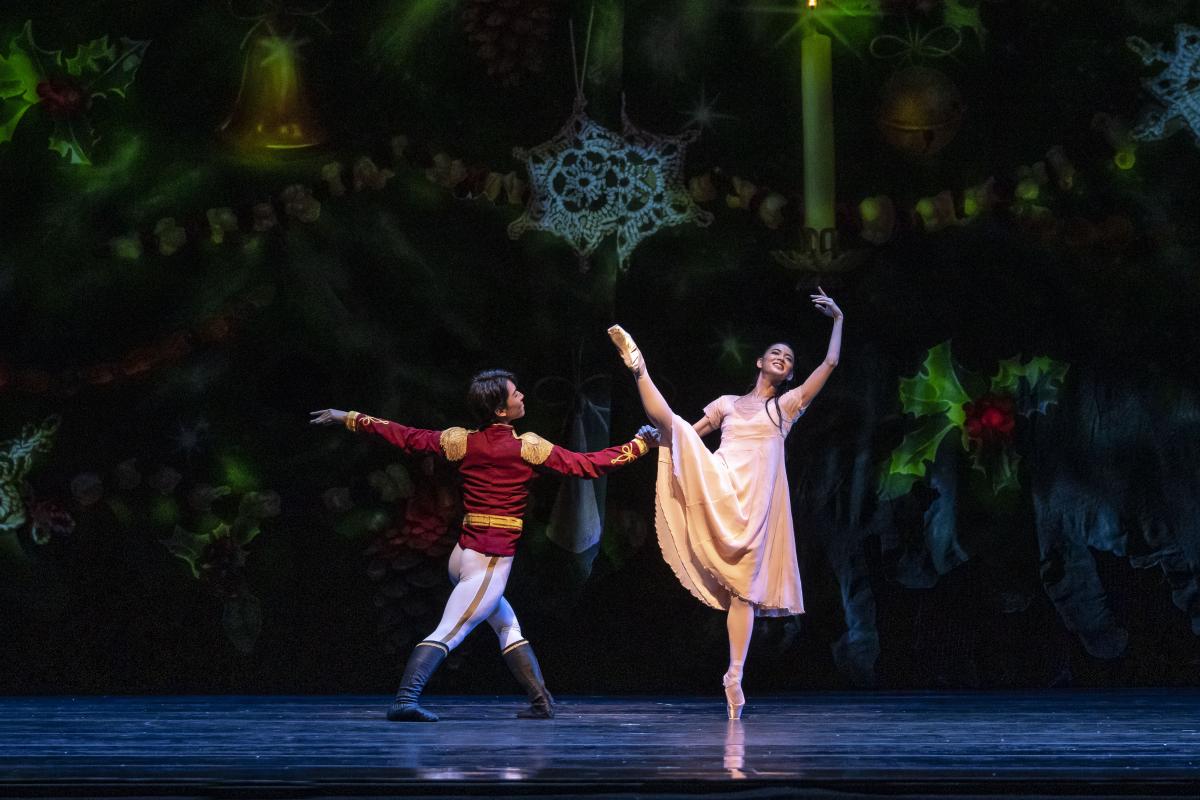 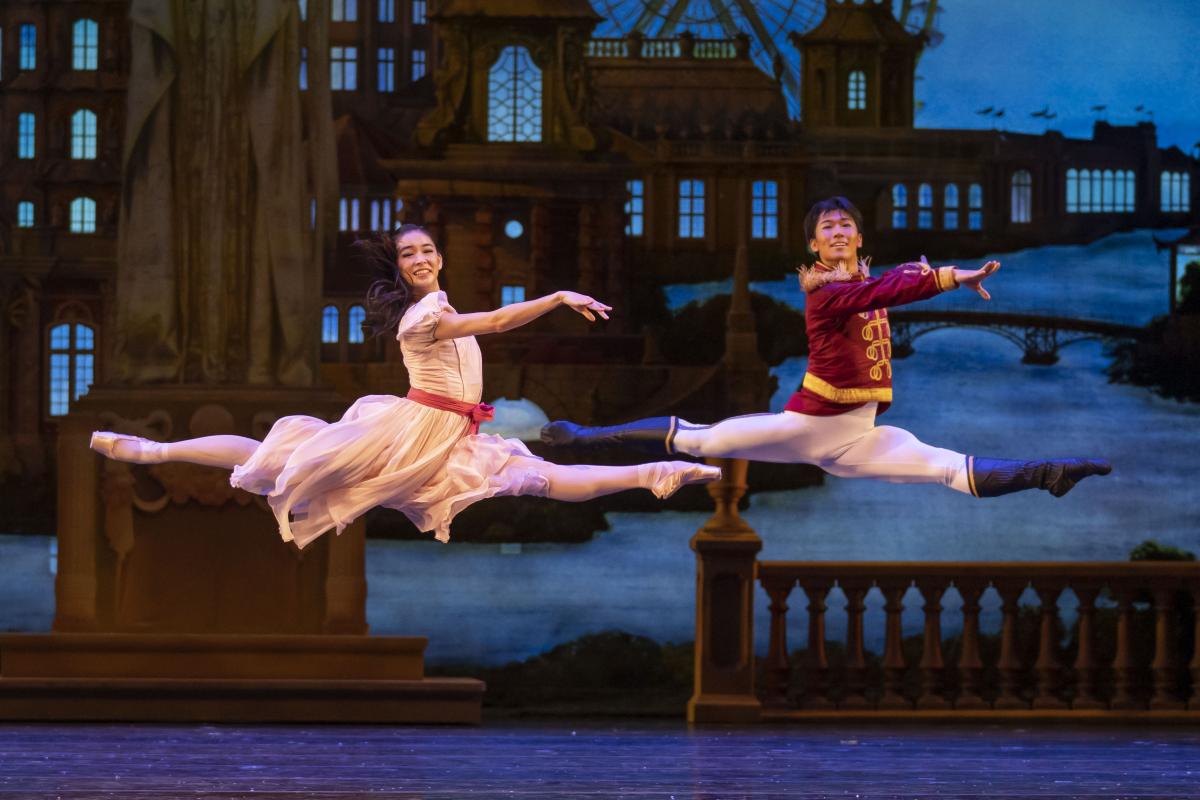 The Great Impresario escorts Marie and the Prince to several various pavilions: