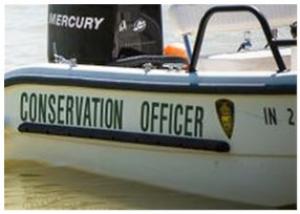 Indiana Conservation Officers have identified the missing boater as Kelvin Soto Crespo, 20, of Yabucoa, Puerto Rico. Crespo has been missing since yesterday afternoon after the boat he occupied capsized in Lake Michigan near the East Chicago Marina.

The boat involved, an approximate 18-foot Bayliner runabout has not been located. It was last seen capsized several miles offshore yesterday afternoon. If anyone spots the boat or any items that may be associated with this incident, are asked to contact Indiana Conservation Officers Central Dispatch Center at 812-837-9536.

No additional information is available at this time.

Indiana Conservation Officers are investigating after a boat with four occupants on board capsized on Lake Michigan near the East Chicago Marina.

At approximately 2:15 p.m., conservation officers responded to the boat unsure of how many occupants made it to safety and found that three of the four occupants, who were able to put on life jackets, had done so. The other occupant is still missing. The identity of that person is being withheld pending family notification.

Conservation officers are being assisted on scene by the Lake County Sheriff’s Department Marine Unit, the East Chicago and Whiting fire departments, the U.S. Coast Guard, and the Chicago Fire Department Aviation Unit.

More information will be provided as it becomes available.