"The Tempest" - Well Done and Fun to Watch! 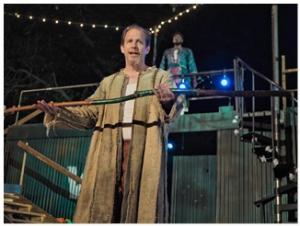 *** Recommended *** I was honored and privileged to be in the audience for the first live, in-person professional theater production in the Chicago area since 2019 (although I have seen several professional summer stock productions in Indiana).  The Oak Park Festival Theatre production of “The Tempest” was well done and fun to watch.  3 Spotlights 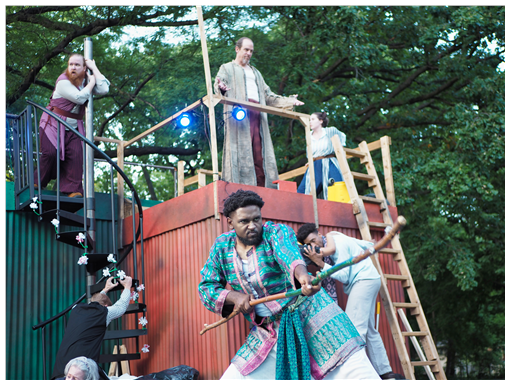 The set looked like a jumble of shipping containers stacked on one on top of another, but it worked well for a shipwreck.  So did the random lights strung about the set, which flashed whenever magic was induced.  The cast moved from level to level using a ladder, a spiral staircase and a normal set of stairs – which also served as a bed/chair.

“The Tempest” opens with Prospero (Kevin Theis) causing a terrible storm at sea, which catches a ship in a whirlpool, and eventually wrecks it, washing the passengers and crew ashore on an apparently uninhabited island.  Prospero has plans for these people and promises to free Ariel when he’s done with them.

On Prospero’s order, Ariel separates the survivors from the shipwreck into different groups.  The ‘distinguished’ passengers, including the Duke of Milan, Antonia (Jeannie Affelder), the King of Naples, Alonsa (Noelle Klyce), her brother, Sebastian (Tony Bozzuto) and Gonzalo (Belinda Bremner), a courtier, ended up on one side of the island.  Alonsa’s son, Ferdinand (Austyn Williamson), washes ashore alone. 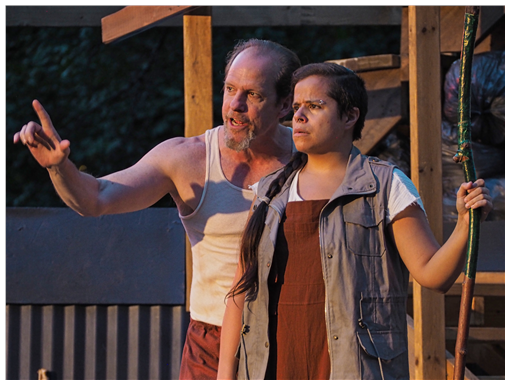 Unfortunately for the survivors, this is the very same island on which Prospero, the former Duke of Naples, and his daughter were marooned fifteen years ago after he and his three-year-old daughter were set adrift in a boat.   Once on the island, Prospero used his own magic to enslave the inhabitants, the magical spirit, Ariel (Bernell Lassai) and the monster, Caliban (Matt Gall).

Now that his daughter is eighteen, Prospero shares his story, telling Miranda (Deanalis Resto) that he was the Duke of Milan, but he was betrayed by his sister Antonia, abetted by the King of Naples and her brother, Sebastian. Only Gonzalo, who packed a trunk with a few necessities, offered help.

Miranda, who has never seen another human, spots Ferdinand, and is fascinated.  On his part, Ferdinand seems pretty fascinated by Miranda, too.  Observing their interest in each other, Prospero sends them into a deep sleep.  Meanwhile, the quarrelsome Antonia and Sebastian annoy King Alonsa, who is inconsolable over the loss of Ferdinand. 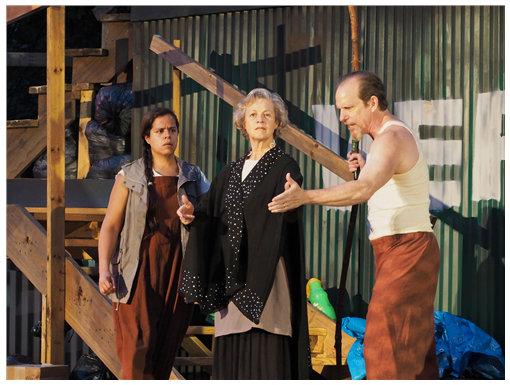 On another part of the island, Alonsa’s butler, Stephano (Orion Lay-Sleeper) and Trinculo (Savanna Rae), who have found a cask of liquor, are really enjoying their shipwreck.  They share a flask or two with the monster, Caliban, who was drawn in by Trinculo’s tricks.  In their drunken state, they believe Caliban’s tales of great wealth and agree to help him kill his enemy Prospero.  By the way (and I love this quotation), Shakespeare says of Caliban, “A devil, a born devil on whose nature Nurture can never stick, on whom my pains, Humanely taken, all, all lost, quite lost.”

In a magical finish, Prospero embraces Gonzalo and forgives those who betrayed him.  He gives Ferdinand and Miranda – who have gone from fascination to total infatuation – his blessing for their marriage.  He frees Ariel and even forgives Caliban, giving him the island.

One comment: I think Shakespeare should be played the way it’s written.  In other words, if the character is written as male/female, then all dialogue should continue to refer to a male/female even if the part is played by someone of the opposite sex.   There was no good 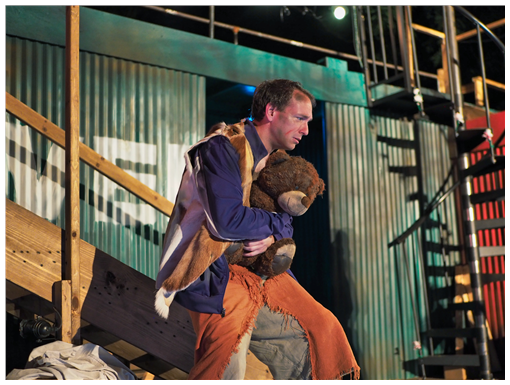 reason to make Antonio into Antonia – changing all the pronouns as well.  Same with Alonso becoming Alonsa.  Here’s the thing, the bard frequently had men playing women and I’ve seen other women playing men BUT always as its written.  There’s just no excuse since Gonzalo is played by a woman but neither the name nor the pronoun was changed there.  Just be consistent!

Oak Park Festival Theatre’s production of “The Tempest” runs through August 21st at Austin Gardens, 167 Forest Avenue, Oak Park.  Bring your own lawn chair or rent one for just $5.  Parking is available for $3.00 in the garage across the street from the park.  Running time is about two hours, 15 minutes with an intermission.   Tickets are $38.  FYI www.oakparkfestival.com.