Straight No Chaser to perform two shows at Paramount Theatre

Straight No Chaser is the real deal, the captivating sound of nine unadulterated human voices coming together to make extraordinary music that is moving people in a fundamental sense... and with a sense of humor.

Formed during the 1996-1997 school year at Indiana University, Straight No Chaser began, according to group member Steve Morgan, as a "way to meet girls." Since then, they have emerged as a phenomenon with a massive fanbase and a long list of accomplishments including 2 RIAA Gold Certified albums, over 1.5 million concert tickets sold, over one billion streams on Pandora, and over two million albums sold worldwide.

In addition to touring, their third PBS special "Straight No Chaser: The 25th Anniversary Celebration," will start airing nationwide this June. The concert, filmed at the Murat Theatre at Old National Center in Indianapolis in 2019, features the nine group members performing classics like "Proud Mary," "Lean on Me" and "Twistin,'" as well as pop mash-ups, like "Uptown Funk/Thriller."

Earlier this year, Straight No Chaser released a book of cocktail and food recipes, sharing their family traditions with their fans. “Straight No Chaser Sound Bites: A Cappella, Cocktails, and Cuisine,” a recipe book with personal family memories shared with the broader Chaser family and published by Red Lightning Books (a sister company of IU Press), is available on Amazon, Barnes & Noble, Red Lightning, and on Straight No Chaser's site, sncmusic.com.

This fall, Straight No Chaser will release a physical version of last year's deluxe edition of Social Christmasing, which featured an original, "Christmas Show," written by group member Mike Luginbill and "Celebrate Me Home," featuring Kenny Loggins, in addition to the album's original tracklist which included their signature twist on Christmas classics like "Silver Bells" and "Frosty The Snowman," five new original songs, and a hopeful take on the Counting Crows classic "A Long December." 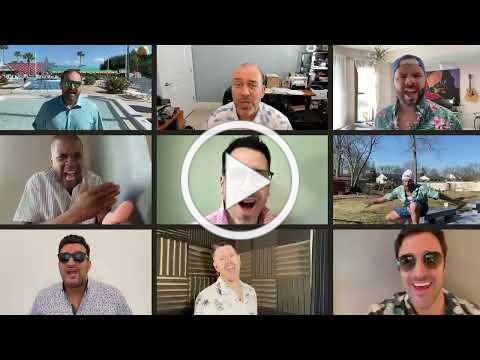 ﻿Paramount Theatre, 23 E. Galena Blvd., is the center for performing arts in Aurora, the second largest city in Illinois. The beautiful, 1,843-seat theater, graced with a strong 1930s Art Deco influence and original Venetian décor, nationally known for its high-quality productions, superb acoustics and historic grandeur, has been downtown Aurora’s anchor attraction since 1931.

After launching its own Broadway Series in 2011, Paramount Theatre grew to be the second largest subscription house in the U.S. Before Covid, more than 41,000 subscribers from all over Chicagoland and the Midwest were enjoying Paramount’s critically acclaimed, 2019-20 Broadway-caliber productions. In addition, Paramount also presents an array of internationally known comedians, musicians, dance troupes and family shows annually.

Paramount Theatre continues to expand its artistic and institutional boundaries under the guidance of Tim Rater, President and CEO, Aurora Civic Center Authority; Jim Corti, Artistic Director, Paramount Theatre; a dedicated Board of Trustees and a devoted staff of live theater and music professionals.