Steppenwolf Theatre Company, the nation’s premier ensemble theater company, is pleased to present the Steppenwolf for Young Adults’ (SYA) world premiere adaptation of Chlorine Sky, by Mahogany L. Browne, based on her book, and directed by Ericka Ratcliff. This intimate coming-of-age story based on Browne’s popular young adult novel will play February 14 – March 11, 2023 in Steppenwolf’s Downstairs Theater, 1650 N. Halsted St. in Chicago. The press opening is Saturday, February 18 at 8 pm.

There will be public performances and student matinees of Chlorine Sky, inviting all audiences to experience this world premiere. Tickets start at $5 for teens through the Teen Arts Pass. Regular tickets are $5 for college students and begin at $20 for the general public. Single tickets to Chlorine Sky are now on sale at steppenwolf.org and (312) 335-1650.

Student matinees will take place at 10 am on weekdays from Tuesday, February 14 – Friday, March 10, 2023. Recommended for grades eight and up. To register your school, click here. Tickets are only $5 for students and chaperones are free.

By Mahogany L. Browne, based on her book 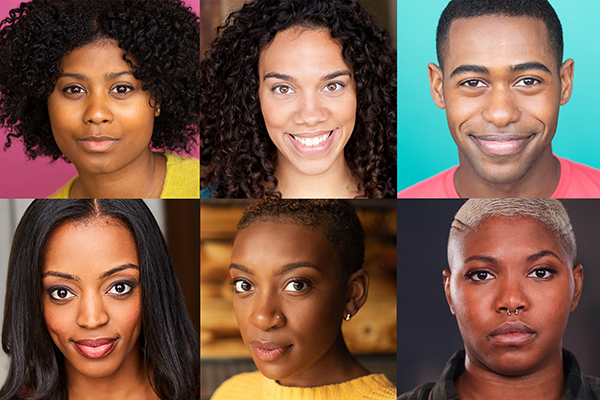 "Ok, so boom. / We ain't friends anymore." Sky and Lay Li were always in sync. But now their rhythms are changing; Sky likes swimming, and Lay Li is all about beauty. Sky, basketball; Lay Li, boys. Things just make more sense underwater and on the court. A world premiere adaptation of Mahogany L. Browne’s popular young adult novel, Chlorine Sky is an intimate coming-of-age story told in verse about two girls who are best friends – until they aren’t. Sometimes, growing up means growing apart.

This world premiere production is supported in part by the National Endowment for the Arts as part of its Grants for Arts Projects.

Mahogany L. Browne (Author/Playwright) selected as Kennedy Center's Next 50, is the Executive Director of JustMedia, a media literacy initiative supporting the groundwork of criminal justice leaders and community members. This position is informed by her career as a writer, organizer and educator. Browne has received fellowships from Art for Justice, Air Serenbe, Cave Canem, Poets House, Mellon Research & Rauschenberg. She is the author of recent works: Vinyl Moon, Chlorine Sky, Woke: A Young Poets Call to Justice, Woke Baby and Black Girl Magic. Browne is the founder of the diverse lit initiative, Woke Baby Book Fair. Her latest project is a poetry collection responding to the impact of mass incarceration on women and children: I Remember Death By Its Proximity to What I Love (Haymarket Books). She is the first-ever poet-in-residence at the Lincoln Center and lives in Brooklyn, NY.

Ericka Ratcliff (Director) is Artistic Director of Congo Square Theatre Company where she works to amplify the mission of celebrating the complexities of Black life and culture on stage. Most recently, Ericka directed WHITE with Definition Theatre (presented at Steppenwolf Theatre’s 1700 Theater as part of the LookOut series) and was co-director on the Chicago premiere of What To Send Up When It Goes Down at Congo Square. She has worked regionally and locally with Alliance Theater, Steppenwolf Theatre, Northlight, Victory Gardens, Chicago Shakespeare, Collaboraction, House Theater of Chicago, Mixed Blood, Milwaukee Rep, Kansas City Rep, CENTERSTAGE, Pittsburgh Playwrights and Second City, among others. She is a recipient of the 2017 3Arts Make A Wave Award. Ericka is also an artistic associate with Lookingglass Theater. She is a graduate of Roosevelt University.

Steppenwolf Theatre Company’s trailblazing new 50,000 square foot theater building and education center, the Liz and Eric Lefkofsky Arts and Education Center, was designed by world-renowned architect Gordon Gill FAIA of Adrian Smith + Gordon Gill Architecture, with construction by Norcon. The centerpiece of the new Arts and Education Center is the new 400-seat in-the-round Ensemble Theater in Honor of Helen Zell—one of its kind in Chicago—with theater design and acoustics by Charcoalblue.

As the Chicago theatre community continues to navigate the COVID-19 pandemic, Steppenwolf Theatre remains committed to the safety of its patrons and staff. For the most-up-to-date information on our venue’s COVID precautions, please visit steppenwolf.org/welcomeback.

Steppenwolf Theatre Company is a Chicago theater that is home to America’s ensemble. The company began performing in the mid-1970s in the basement of a Highland Park, IL church—today Steppenwolf is the nation’s premier ensemble theater with 49 members who are among the top actors, playwrights and directors in the field. Deeply rooted in its ensemble ethos, the company is committed to equity, diversity, inclusion and making the Steppenwolf experience accessible to all. Groundbreaking productions from Balm in Gilead and August: Osage County to Downstate and Pass Over—and accolades that include the National Medal of Arts and 12 Tony® Awards—have made the theatre legendary. Artistic programming includes a main stage season; a Steppenwolf for Young Adults season; LookOut, a multi-genre performance series; and the Steppenwolf NOW virtual stage. The nationally recognized work of Steppenwolf Education engages more than 20,000 participants annually in Chicagoland communities promoting compassion, encouraging curiosity and inspiring action. While firmly grounded in the Chicago community, more than 40 original Steppenwolf productions have enjoyed success nationally and internationally, including Broadway, Off-Broadway, London, Sydney, Galway and Dublin. 2021 marked the opening of Steppenwolf’s landmark Liz and Eric Lefkofsky Arts & Education Center—deepening the company’s commitment to Chicagoland teens and serving as a cultural nexus for Chicago. Glenn Davis and Audrey Francis are the Artistic Directors and E. Brooke Flanagan is Executive Director. Keating Crown is Chair of Steppenwolf’s Board of Trustees