Steppenwolf Theatre Company, the nation’s premier ensemble theater company, is thrilled to welcome audiences back for in-person performances for the first time in 20 months with its acclaimed and extraordinary revival of Bug by Pulitzer Prize and Tony award-winning ensemble member Tracy Letts, in the Downstairs Theater November 11 – December 12, 2021 (opening November 14). Directed by Tony award winner David Cromer with ensemble members Randall Arney, Carrie Coon and Namir Smallwood alongside Jennifer Engstrom and Steve Key reprising their roles, the production was shut down before the end of its run in March 2020 due to the pandemic, and the show’s return to stage is Steppenwolf’s bold refusal to let the disaster of COVID-19 rewrite its story. 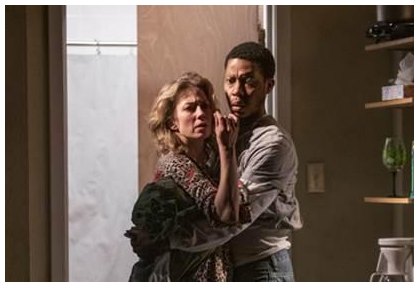 In a seedy Oklahoma motel room, a lonely waitress begins an unexpected love affair with a young drifter. And then they see the first bugs…Tracy Letts’s mind-bending cult classic is a luridly funny tale of love, paranoia and government conspiracy.

Namir Smallwood returns to the Steppenwolf stage fresh off his widely acclaimed performance in Antoinette Chinonye Nwandu's Pass Over, which was the first play to reopen Broadway this past summer. Carrie Coon returns to the stage having most recently filmed HBO’s Julian Fellowes Series, The Gilded Age. She can also be seen on screen in Jason Reitman’s Ghostbusters: Afterlife premiering this month.

Steppenwolf joins the coalition of Chicagoland performing arts venues in requiring all patrons to be masked and show proof of COVID-19 vaccination or negative test upon entry. For details, visit steppenwolf.org/welcomeback. Additionally, Steppenwolf will offer four reduced capacity performances for Bug, seating every other row and one seat on either side of each party: Sunday evening November 21, Wednesday evening November 24 and Wednesday matinees December 1 and 8. For more info, visit steppenwolf.org. 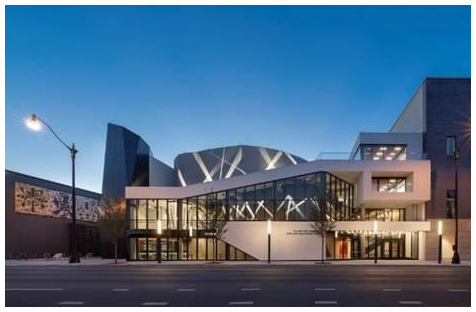 Audiences will return in November not to the same building they left, but to a stunning new 50,000 sq. ft. theater building and education center on Halsted Street. As the world came to a pause in 2020, the walls of Steppenwolf’s state-of-the-art Liz and Eric Lefkofsky Arts and Education Center continued to rise, symbolizing hope for the entire Chicago arts community. Bug audiences will be the first to explore the new building and experience a brand-new theatergoing experience.

At the heart of Steppenwolf’s new Liz and Eric Lefkofsky Arts and Education Center is an intimate and state-of-the-art 400-seat theater in the round, one of its kind in Chicago, with theater design and acoustics by Charcoalblue. Named the Ensemble Theater in Honor of Helen Zell, this new performance venue will open to audiences with the Steppenwolf for Young Adults world premiere adaptation of Eve L. Ewing’s 1919 in February 2022, followed by a grand public opening of the theater with ensemble member Yasen Peyankov’s adaptation of Anton Chekhov’s Seagull featuring an all-ensemble cast, April-June 2022.

The new building also features Steppenwolf’s first-ever dedicated education space, The Loft, encompassing the entire fourth floor of the Arts and Education Center. Steppenwolf was founded more than 45 years ago by a circle of students who craved a space to call their own. The Arts and Education Center continues and amplifies that vision, growing the reach of Steppenwolf’s education programming from 20,000 to 30,000 students annually.

For more information on the new Arts and Education Center and Steppenwolf’s campus expansion, visit steppenwolf.org/buildingonexcellence.

Steppenwolf raises the curtain once again on its blistering and extraordinary revival of Bug by ensemble member Tracy Letts, featuring ensemble members Randall Arney, Carrie Coon and Namir Smallwood. In a seedy Oklahoma motel room, a lonely waitress begins an unexpected love affair with a young drifter. And then they see the first bugs… Tracy Letts’s mind-bending cult classic is a luridly funny tale of love, paranoia and government conspiracy. These stunning performances—and this award-winning production—will once again reverberate throughout the building and welcome back audiences to the Steppenwolf they know and love: brave, brazen and defiant.

Single tickets start at $20 and are available at steppenwolf.org or 312-335-1650. Discounts available including new Artists and Essential Workers discount, expanded 20-for-$20 program, Pay-Your-Age performances, and more. Members who wish to see this award-winning production again can add this show to their season package at an exclusive member price. Learn about the complete 2021/22 Comeback Season here.

Steppenwolf is part of the growing coalition of more than 70 Chicagoland performing arts venues and producers that have agreed upon COVID-19 vaccination and mask requirements for all audiences, artists and staff through the end of 2021. Audience members must provide proof of vaccination or negative COVID-19 test certification upon entry in addition to wearing masks. Learn more about Steppenwolf's guidelines at steppenwolf.org/welcomeback.

Steppenwolf has worked over the past year with our operations team, public health advisors and HVAC consultants to prepare its facility to safely welcome patrons back for performances. The addition of the new Liz and Eric Lefkofsky Arts and Education Center has expanded the square footage of the lobbies to nearly twice the previous amount of space offered to guests. Two additional elevators and multiple stairways have also been added to Steppenwolf’s campus for ease of transition between seating levels. The HVAC systems have undergone upgrades to allow for increased filtration and a higher percentage of circulated fresh air across all three theaters.

Committed to making the Steppenwolf experience accessible to everyone, performances featuring American Sign Language Interpretation, Open Captioning and Audio Description are offered during the run of each live play. Assistive listening devices and large-print programs are available for every performance and all three theaters are equipped with an induction hearing loop and feature a push-button entrance. All theaters feature wheelchair accessible seating and restrooms, and Front Bar features a push-button entrance, all-gender restrooms and accessible counter and table spaces.

United Airlines is the Official and Exclusive Airline of Steppenwolf. Steppenwolf is also grateful for the significant season support from Allstate Insurance Company, ComEd, JPMorgan Chase, PNC, and Vinci Restaurant.

Steppenwolf Theatre Company is a Chicago theater that is home to America’s ensemble. The company began performing in the mid-1970s in the basement of a Highland Park, IL church—today Steppenwolf is the nation’s premier ensemble theater with 49 members who are among the top actors, playwrights and directors in the field. Deeply rooted in its ensemble ethos, the company is committed to equity, diversity, inclusion and making the Steppenwolf experience accessible to all. Groundbreaking productions from Balm in Gilead and August: Osage County to Downstate and Pass Over—and accolades that include the National Medal of Arts and 12 Tony® Awards—have made the theatre legendary. Artistic programming includes a main stage season; a Steppenwolf for Young Adults season; LookOut, a multi-genre performance series; and the Steppenwolf NOW virtual stage. The nationally recognized work of Steppenwolf Education engages more than 20,000 participants annually in Chicagoland communities promoting compassion, encouraging curiosity and inspiring action. While firmly grounded in the Chicago community, more than 40 original Steppenwolf productions have enjoyed success nationally and internationally, including Broadway, Off-Broadway, London, Sydney, Galway and Dublin. 2021 marks the opening of Steppenwolf’s landmark Liz and Eric Lefkofsky Arts & Education Center—deepening the company’s commitment to Chicagoland teens and serving as a cultural nexus for Chicago. Glenn Davis and Audrey Francis are the Artistic Directors and E. Brooke Flanagan is Executive Director. Eric Lefkofsky is Chair of Steppenwolf’s Board of Trustees.