The story is about Lawrence himself, played, as I understand the character William Morel ( Brian Boller handles this narrator role with great style). His alter-ego, Paul Morel is played by Miles Borchard.. It is a bit confusing as to if the two characters are brothers, with one having died, or if in fact, the alter-ego concept is in fact correct. To be honest, I kind of like my theory  as more understandable. 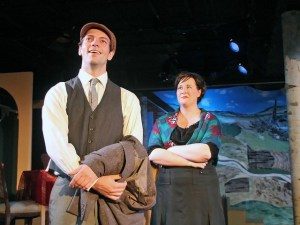 His parents were plain folk. His father ( Stepehn Dunn), a miner is abusive to his mother ( deftly handled by  Amy Gray), but in these times, women endured what their husbands gave them. The ties between “Paul” and his mother were greater than the love he is able to muster for the other women who come into his life, and they do!

His first love is Miriam Leivers ( adorably played by  Corrie Riedl) who lived at the farm nearby the Morel home. While he does care for her , he finds himself attracted to her friend Clara Dawes ( well -played by  Emma Brayndick), who is married to  Baxter ( Baird Brutscher, who also plays Edgar Leivers, father of Miriam). See! I told you there is some confusion here! 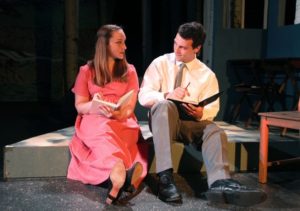 The other cast members: Pete Blatchford, Tina Shelly and Heidi Drennan play several characters and help with the movement of the set pieces from scene to scene.

While the story portrays his parents mismatched marriage and all of his own affairs of the heart, as well as the jealousy and hatred his mother showed for anyone who would take her son from her, it also shows why he became the writer he did, instead of a coal miner like his father. Often when we see a play where accents are used, they are thick and unclear making it confusing for the audience to stay with the plot ad sub-plot the writer is trying to convey. One can see the struggle between the adult, mature Lawrence in comparison to the young, naïve man searching for his love and self- identity, but maybe you will find it hard to follow. 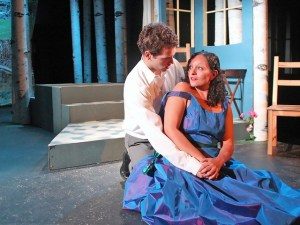 The theater is the Studio, so it is small and intimate. The set ( Emma Brayndick and Pat Henderson) is complicated, yet simple and many times will be hard to follow as where they are. The sound and music ( Casey Brayndick and Andy Long) are fine as are the costumes (Mchele Brayndick). Notice something about the names involved with On The Spot? Maybe the company should be called the Brayndick Players!

I know they had a stage combat coach ( Steve Wisegarver) and most of the fighting and slapping looked pretty good, but the intimacy coach (Joshua Simpson) did not bring out the attraction that one should have seen between Paul and either of his ladies. The sexual tension that the script called for did not come across, which may have been the reason that the story did not grab me. I wanted to love this 2 hour -thirty minute adaptation, but love was not in the air at The Greenhouse Theater Center located at 2257 N. Lincoln Ave. where “Sons and 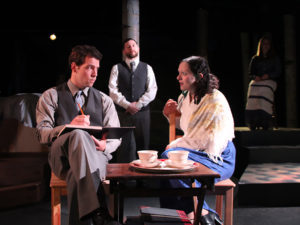 Lovers” will continue thru September 29th with performances as follows: 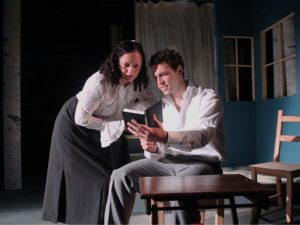 Student and senior discounts are $25 and for Veterans, there are a limited number of free tickets for each performance VET TIX ( call the theater for more info or visit