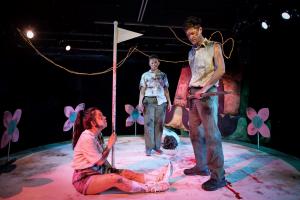 Three of the employees of the “It’s a Small World” ride within the Magic Kingdom – Donny (Patriac Coakley), Becca (Jackie Seijo) and Kim (Stephanie Shum) – are not exactly having a sunshiny day. Trapped deeply within the bowels of the ride after a series of massive explosions (the product of a freaky accident or an act of terrorism is not initially made clear), they must fight for survival and devise a plan for their safe escape. Donny, being the alpha male, contributes the most ideas and attempts to discover several routes to freedom, including using a fellow employee’s corpse with a handwritten note contained in the shirt’s pocket as a crudely fashioned message in a bottle, which he floats through the moat that surrounds the damaged circular dick that once was a centerpiece to the ride.

Becca is a bit more despondent. She is willing to help out but is in very low spirits. She fled the close-minded environment of her native Iowa once it was discovered that she was in a relationship with another woman. She deeply regrets having to leave her princess without any warning and in such a hasty fashion. If she makes it out alive, she vows to return to the woman that she loves.

Kim is the up-standing and “by the book” ideal Disney employee, following every instruction given to her and obediently enacting the company’s strict guidelines in an almost cult-like faithfulness. The current problem with Kim is that she is badly injured. A flagpole from one of the ride’s animatronics is impaled in her thigh. Removing the object only caused more bleeding so the better option was to leave the pole in place in the hopes of slowing the rate of blood loss, keep applying pressure to the wound and using the sleeves of Donny’s shirt as a tightly wound tourniquet. Her chances for survival are slim because the hemorrhaging has made her very weak and, in her present state with a pole sticking out of her leg, she is pretty much immobile. But all three members of this motley trio are fighters and, with brave smiles upon their faces, refuse to give up or perish.

The most challenging role in “Small World” is that of Kim, and Shum (who is also the new Co-Artistic Director of The New Colony) is quite simply magnificent. Not only is the role physically daunting but Shum also has a unique approach to finding so many layers to this character. She nicely modulates the rhythms of a victim suffering from shock as well as one who is in great bodily pain. As she fluctuates between lucidity and near absurdist incoherence she dazzles in an astonishing performance. Scenic Designer Sotirios Livaditis has created a devilishly macabre set which includes a large white spinning disk which is now tilted at a steep angle since it has spun off of its axle, large strands of hanging live electrical wires, several objects of charred detritus or wreckage that litters the playing area and even a sort of tongue in cheek reference to Mary Poppins herself. Also very strong is the sound design of Erik Siegling, which has an eerie assortment of the voices of other survivors who are trapped nearby and the ride’s theme song played so often (not quite continuously), with a haunting echo effect as if it’s being broadcast from a distant planet, that the lyrics “it’s a small world after all” may be running through your head hours after you’ve left the theater.

It is, indeed, a world of laughter, tears, hopes and fears. This “Small World,” which in many ways is a very modern and entrancing re-imagining of Jean-Paul Sartre’s famous play “No Exit” for a whole new generation, is stunning.

Tickets: $20. Students/seniors: 25% off. Tickets are currently available at www.thenewcolony.org

Running time is approximately 85 minutes with no intermission.