"Six" - A Review by John Olson for TSP 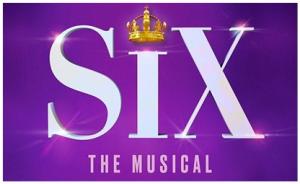 are all reincarnated as pop rock divas, transported to the present to tell us about their lives as Queens to the infamous monarch, and for all but one of them, how their marriages and in some cases their lives – were cut short. The all-female cast (backed up by an all-female four-piece band) are together on stage for all of the show’s 80 minutes. Each has a song telling their story, each done to suggest the vocal styles of pop divas like Beyonce, Britney Spears, Rihanna, Adele, Ariana Grande, and others. Those who are familiar with those singers will get an extra kit out of recognizing the parodies of their styles, but everyone can enjoy the high energy, sharp choreography, glam-rock costumes, and spectacular lighting of this show. Though this is the first engagement of the national tour, the cast has a polish and confidence that suggests they’ve been doing it for years. The dialogue and lyrics are witty – and the songs, though rock, are not amplified so loud as to be threat to your hearing. The six performers give the audience a great night out.