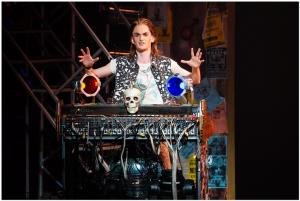 Lonny (John-Michael Breen) is the lecherous narrator who frequently breaches the fourth wall.  He has a serious love affair going on with the Fog Master 5000.  He has some very funny bits, particularly as he figures out the plot with the aid of Musicals for Dummies.  Lonny works for Dennis (Ryan M. Hunt) who owns the Bourbon Bar on L.A.’s Sunset Strip.

According to Lonny, a successful musical has to have a ‘love interest’ which is Drew (Anthony Nuccio), a wanna-be rock star working at the Bourbon and a girl named Sherrie (Katie LaMark), who is literally just off the bus from Kansas.  Although he’s very attracted to Sherrie, Drew can’t seem to tell her that – even with prompting from Lonny!

The Bourbon, and everything else on the Strip will be demolished and a shopping center built, if Hertz (Andrew Tebo) and his son Franz (Chris Renalds) – who’d rather be running his candy shop – get their way.  In an effort to save the Bourbon, Dennis invites rock star, Stacee Jaxx (Sam Harvey) and his band – who all hate him – to perform.  Unfortunately for Sherrie, Stacee gets her fired after they hook up.

Desperate for a job, Sherrie goes to work as an exotic dancer/stripper in club owned by Justice (Kenya Hamilton).  Meanwhile, a new agent puts Drew into a boy band.  Both of them are miserable.  Meanwhile, Regina (Kristina Walz), which she says is pronounced as re-gi-na (a rhyme with vagina) is organizing the community to save the strip by chaining themselves to the door of the Bourbon.  And that’s just the first act!

Staging is a little different than the original.  Instead of set pieces, they’ve used a slew of what looks a lot like cases manufactured right here in Munster by Star Case.   At any rate these wheeled cases, which come in a variety of sizes and shapes, open up as rooms or become a car, or a bar, or a light board.

“Rock of Ages 10th Anniversary Tour” runs through April 28th at the Nederlander Theatre, , Chicago.  Check with Broadway in Chicago for remaining performances.  Tickets range from $18-$85.  FYI (800) 775-2000, all Ticketmaster retail locations and www.BroadwayInChicago.com.