Review of “The Year of Magical Thinking” For TSP News by Julia W. Rath 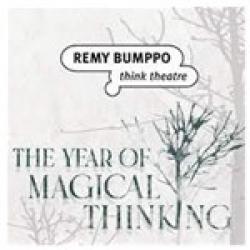 3 Stars, Recommended  Annabel Armour beautifully portrays Joan Didion in this one-woman show “The Year of Magical Thinking.” The story is about an established New York author and how her world is immediately turned upside down when her husband John dies unexpectedly, followed shortly by the death of her chronically ill daughter Quintana. Based on the book of the same name, this 100-minute running narrative (with no intermission) consists of excerpts that have been taken directly from the text and is replete with detailed autobiography and poignant reflections.

We hear the blow-by-blow description of how John collapses in their home, followed by the paramedics arriving and taking him to the hospital—with Didion finally announcing to the doctor that her husband is dead. Her magical thinking comes in when she finds it extremely difficult to cope with the reality of his sudden demise. For one thing, she begins to wonder that since he had died on the East Coast, could he have been alive for a few more hours on the West Coast? She explains how she gives his clothes away but simultaneously wonders that if she holds onto his shoes, would he somehow step back into them and return to being alive? Of course, she knows intellectually that all this makes no sense. But in her suffering, it is the idea of magic that keeps her going, that is, until she has fully dealt with her grief.

In addition, Didion has had to deal with her daughter’s various illnesses, such as pancreatitis, walking pneumonia, a collapsed lung, and serious infections, named and unnamed. Nevertheless, when John dies, Quintana recovers just well enough from her ICU stay so as to be able to give the eulogy at her father’s funeral. Clouded with sorrow, Didion would like to rely on her daughter for emotional support and, in time, wants to sit with her alongside the pool in Malibu, California, with both of them bragging about their manicures. But none of this is meant to be. Again, her mother magically wants her daughter to be perfectly well—and above all, safe. Although it is irrational, Didion blames herself for not being a good enough mother to save and protect Quintana from her ultimate end. Yet she can never make herself say that her daughter is dead. It’s an inconsolable pain that no parent should have to live through. As Didion writes: “A single person is missing for you, and the whole world is empty.”

The guest I took with me is herself a widow, who had previously read the book and wanted to see the show. She explained to me that there is a condition called “widow brain.” This is a combination of brain fog, confusion, and disordered thinking: in large part because you’re overwhelmed and dealing with too many unanticipated events. From being two people, you are suddenly one. Even if you’ve come to expect that someone is going to die, you nevertheless lose some measure of control over your life and, with it, some measure of predictability about your place in the cosmos. According to Wikipedia, “Widow Brain is a term used to describe the fogginess and disconnect that can set in after the death of a spouse. This feeling is thought to be a coping mechanism, where the brain attempts to shield itself from the pain of a significant trauma or loss.” It is also the feeling that you can no longer think straight.

Didion’s purpose for writing the book is to deal with her compounded grief of having multiple losses in such a short time period.* Yet the timeline is all over the place. There is some stream of consciousness and some jumping around in her story, and lots of details are related to us that aren’t essential. But this is indicative of her disorganization. With too much coming at her all at once, she doesn’t know how to separate the consequential from the inconsequential. She doesn’t know how or when to take a breath—and the audience starts to feel this too. Considering that Armour holds a book the entire time she is on stage and continually looks down at it, the performance feels more like a live staged reading than a full-fledged play. However, the way it differs from a simple reading is that director Gabrielle Randle-Bent has included a lot of blocking in this performance: This means that Armour does not sit or stand in one space to recite all of her lines; rather, she moves from one part of the stage to another naturally and easily and knows exactly where to be positioned at every moment. Yet despite strong acting and good direction, there are far too many moments when the show seems too much like a college lecture. For starters, having Armour reading constantly creates too much distance between herself and the audience. More to the point, I wanted her to act more the part of the widow than to spout lots of (meaningful) quotations, sometimes at length. From my perspective, there is not enough crying or even screaming or yelling during private moments. Armour shows too much of a public face throughout and is much too poised to be fully believable. I wanted her to appear more depressed or angry, or even disheveled at times.

Mental health consultant Avi Vodnoy Wolf was brought in to help Armour portray deep emotions in her acting. Wolf is a psychotherapist who created Offstage Equilibrium, “a program that teaches actors skills for exiting emotion and character.” That said, I decided that my issue with “The Year of Magical Thinking” show had nothing to do with the quality of the acting, but, rather, with the way that the book was adapted for stage. While the underlying material is good, my suggestion for improvement would be to have two Joan Didions interact with each other: one who narrates her lived experience as it happens—with all of its requisite chaos—while the other Joan thoughtfully reflects on her situation. The split would help separate out raw feelings versus refined observations and would break out the character who lacks control of her circumstances from the one who is learning to cope with them. To put this another way, the “Joan-in-the-moment” can be irrational with her magical thinking while “author Joan” can quote directly from her manuscript and be clinical in her judgments and philosophical about her approach to life.

A black background, a white bench, and a long semi-U-shaped wooden runway make up the bulk of the stage. This simple but elegant scenic design is the creation of Yeaji Kim. Especially poignant are the two lighted cubes between areas of the runway. The larger cube is supposed to represent Didion’s deceased husband, and the smaller cube represents her daughter. At the very end of the performance, the light in the larger cube dies first, followed by the light in the smaller cube. This is an interesting analogy, but my initial thought was “Why a cube?” “Why not some other shape?” (This reminded me of the original “Star Trek” episode where the crew members are transformed into polyhedrons, but I digress.)

Costume design by Jos N. Banks is very good. Armour wears a neutral sweater jacket and white slacks, which nicely reflect the changing colors of the lights; this subconsciously keeps our focus on the main character. Lighting design by Heather Sparling is superior. Sound design and original music by Jeffrey Levin are fitting for this production. Chapters of the book and of Didion’s life are demarcated by quick (versus gradual) changes in the lighting and the occasional ping or a similar sound. This is nicely done.

Watching this show can stir up all sorts of memories or uncomfortable feelings that we may struggle with when family members or close friends become seriously ill or pass away. For those who have the strength or desire to follow a tale about the process of mourning and healing, then this is the right show for you. Perhaps those who have already lived through the death of a spouse or a child or have experienced some similar tragedy or loss might find this show to be cathartic. Yet we all grieve and cope in different ways, and some may choose not to relive such sad feelings from the past. In any event, the book needs to be adapted better so as to create a more effective script and generate a stronger emotional response on the part of the audience.

“The Year of Magical Thinking”, produced by the Remy Bumppo Theatre Company, is playing through June 5, 2022, at the Theater Wit, 1232 W. Belmont Street, in Chicago.

Tickets are $37-$47, depending on time and date of the performance.
Student tickets are $15.

Note that sometimes there will be a Cubs game during the evening at Wrigley Field. Please give yourself more time to arrive at the theater than you think is required. The ball park and the theater are less than one mile from each other and traffic will share many of the same streets.

To purchase tickets for “The Year of Magical Thinking”, go to: https://theaterwit.org/tickets/productions/440/performances#top

For more information about this show and others by the Remy Bumppo Theatre Company, please visit: https://www.remybumppo.org/.

Everyone at Theater Wit is required to be vaccinated to enter the building and must show proof of vaccination at the door for admittance. Please present your vaccination card (electronic photos and copies are acceptable) AND an I.D. when you arrive. If you forget proof of vaccination, the Theater Wit Box Office will reschedule your tickets at no charge. There are Free Exchanges due to illness. Contact the Theater Wit Box Office on the day of performance and they will reschedule your ticket at no charge.

Masks are required at all times indoors.

*Note that according to certified grief therapist Dr. Alejandra Vasquez, JD, CT, one of the best ways to curb widow brain is to write things down. Another way is to ask for help. See https://www.joincake.com/blog/widow-brain/ for more information.