Review of “Tommy on Top” by Julia W. Rath for TSP News 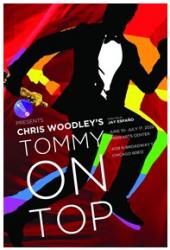 3 Stars ***   Chris Woodley’s “Tommy on Top” is a tale of two plays, one overlaying the other. The primary story has to do with Tommy (Ryan Cason), who is a talented Hollywood actor who can pass as straight when, in fact, he’s gay. Because he keeps his sexual orientation hidden from the public, he struggles with inner conflict. In this show, Tommy lets his frustrations out by getting drunk and sometimes disorderly among the people he’s closest to. They include his loving partner George (Patrick Gosney), his supportive but largely inebriated sister Molly (Theresa Liebhart), and his gay theatrical agent Eddie (Brian Boler). Thirty-five minutes into the show, we finally get to the meat of the story, namely, that Tommy and Ben Affleck are up for the exact same Oscar for Best Actor. And Tommy doesn’t know how he will handle the publicity surrounding the award, for it might leach out to the world at large that he is actually a gay man. 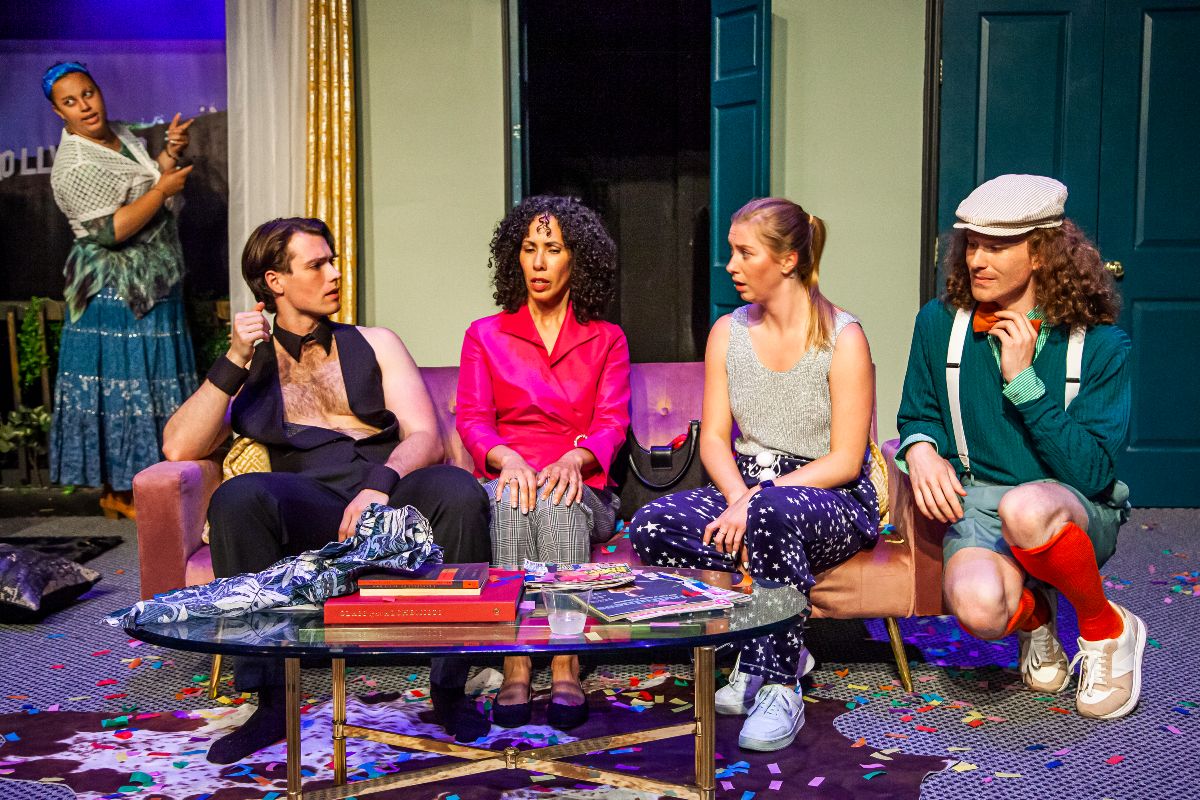 Superimposed on this deeply-felt narrative is a British farce. Eddie collapses in part due to the shock that Tommy might accidentally out himself. He is also deeply upset that the highly influential agent and talent manager Judy Jensen (Sandra Franco) wants to poach Tommy and have him become her client. While all this is happening, Tommy collapses from being drunk. Thus, when Judy shows up to his Beverly Hills suite, George and Molly do their best to make Tommy appear to be absent from the room (when he’s actually underneath the bed covers). They make Eddie disappear too in part because he is an argumentative sort but also because he won’t closet his gayness. And when Judy arrives, George, of course, denies that he is Tommy’s lover. The larger point of “Tommy on Top” has to do with how far too many gay men have closeted themselves out of fear about what the outside world might think of them. The performance is really good when the characters (male, female, gay, straight) make up stories about themselves and their personal and professional lives in order to hide or deny uncomfortable realities. When everybody acts so phony, nobody knows how to relate to each other in an honest manner. For example, under Judy’s urging, George is told that he can no longer introduce himself as being a hair stylist; instead, he has to reinvent himself as having some other career—and being somebody other than who he really is. Then too, it turns out that muckamuck Kiki Lopez (Blythe Inanna) has secretly arranged to take all these compromising photographs of Tommy and George together, with the likely implication that she wants to out Tommy. 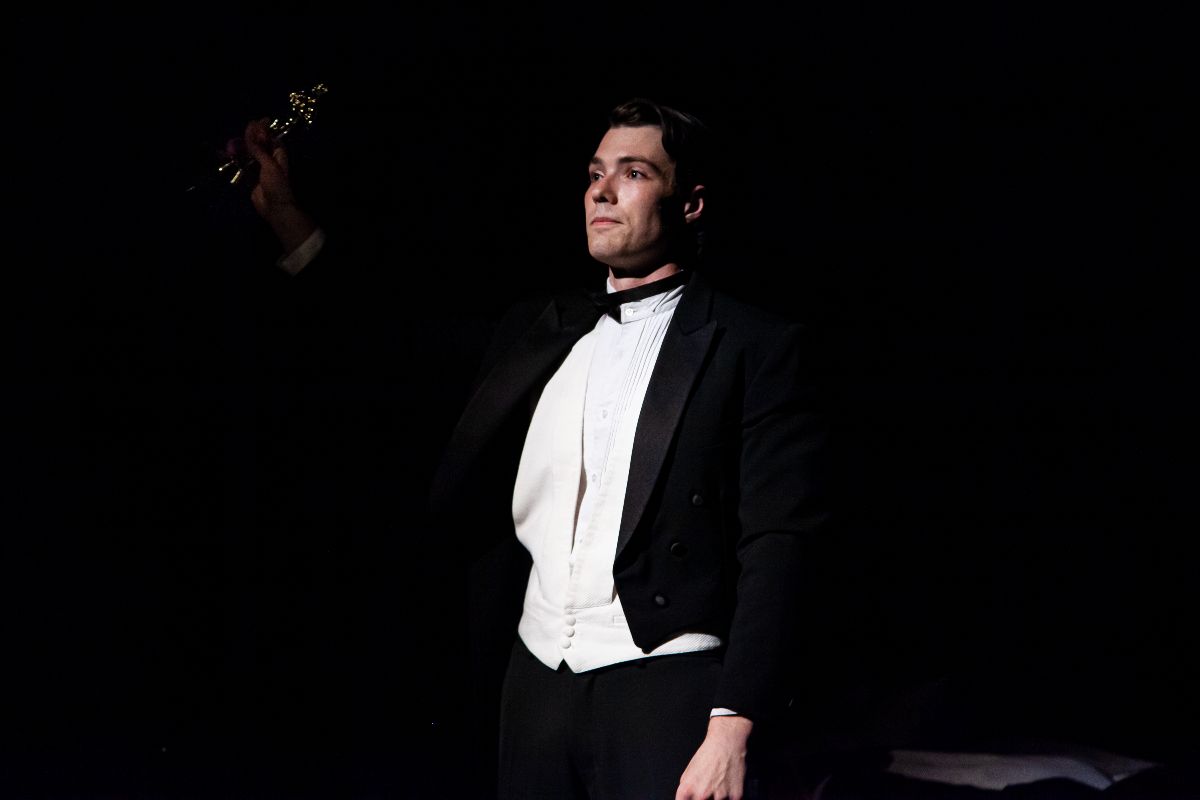 Director Jay Espano does a great job focusing the audience’s attention on the action and drives it nicely from one scene to the next. The story doesn’t skip a beat. Espano has also designed this multipurpose living room/studio suite, which is beautifully functional; and together with props designer Patty Meier, the set feels so comfortable that the audience could make it a second home. Fight choreography by Jack Mcelroy and intimacy choreographer Garrett McCann have nicely integrated scenarios with close contact into the performance. Lighting design by Maggie Meyer is perfect, especially the spotlight at the end. Sound design by Val Gardner is fine, although there were some issues with Franco’s and Inanna’s voices being projected loud enough. 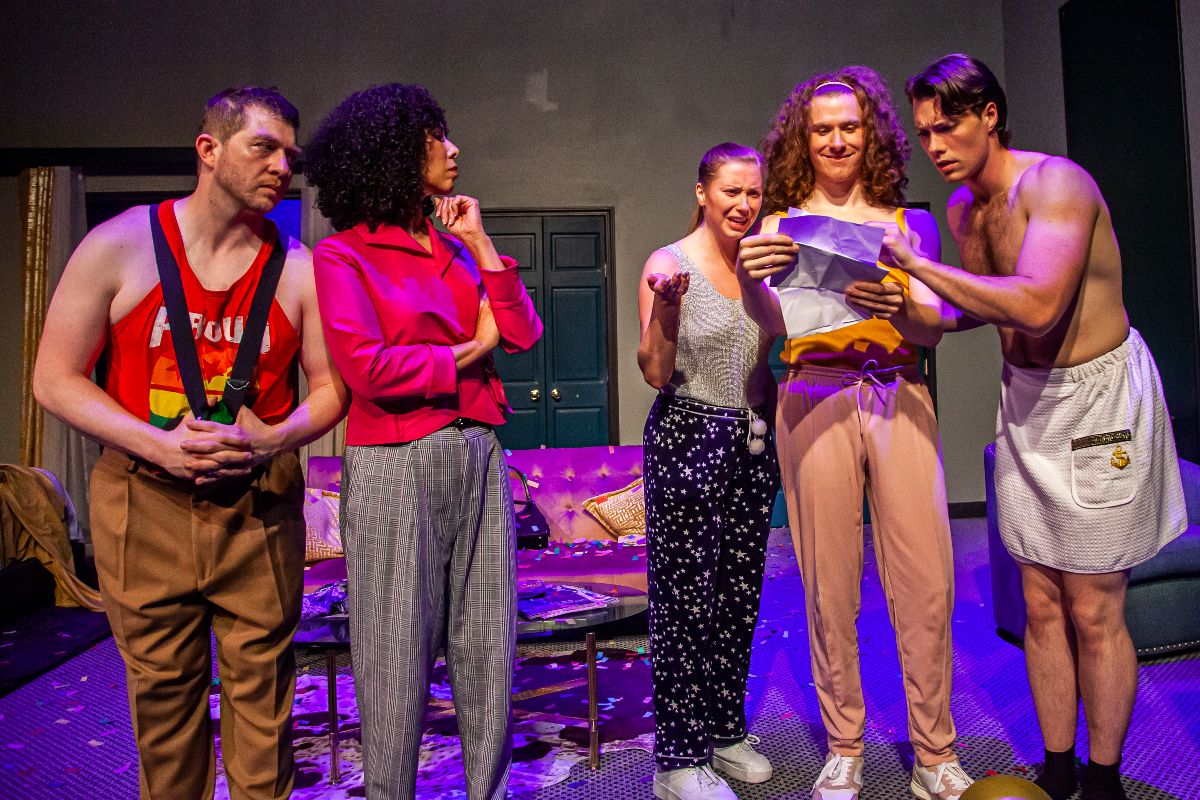 Costume design by Johan Gallardo is excellent. I adored the “straight” black costume that Tommy wears and the red “Gay Republican Trump Supporter” T-shirt, worn by Eddie. Speaking of Eddie, since his political philosophy and his being gay seem to be a contradiction, he becomes the person that everybody loves to hate. I’m sure a lot of people in the audience will love the fact that he gets thrown off the apartment balcony twice—and of course, all this is all meant to be funny. To my mind, however, this only feeds into the growing use of violence in our country today. Although I personally am not a Trump fan, I do have a problem with aggressive behavior being considered funny. In fact, I didn’t find this show as funny as my guest did, as there are too many moments when the farce devolves into too much inanity, and the main point of the story is compromised (at least, temporarily). For some, the juvenile humor might make the complicated topic of coming out of the closet and being honest about oneself more palatable. But when there is too much buffoonery, the characters become too shallow. As a result, we may ultimately care about Tommy, but the rest of the characters have largely become caricatures who fall by the wayside. 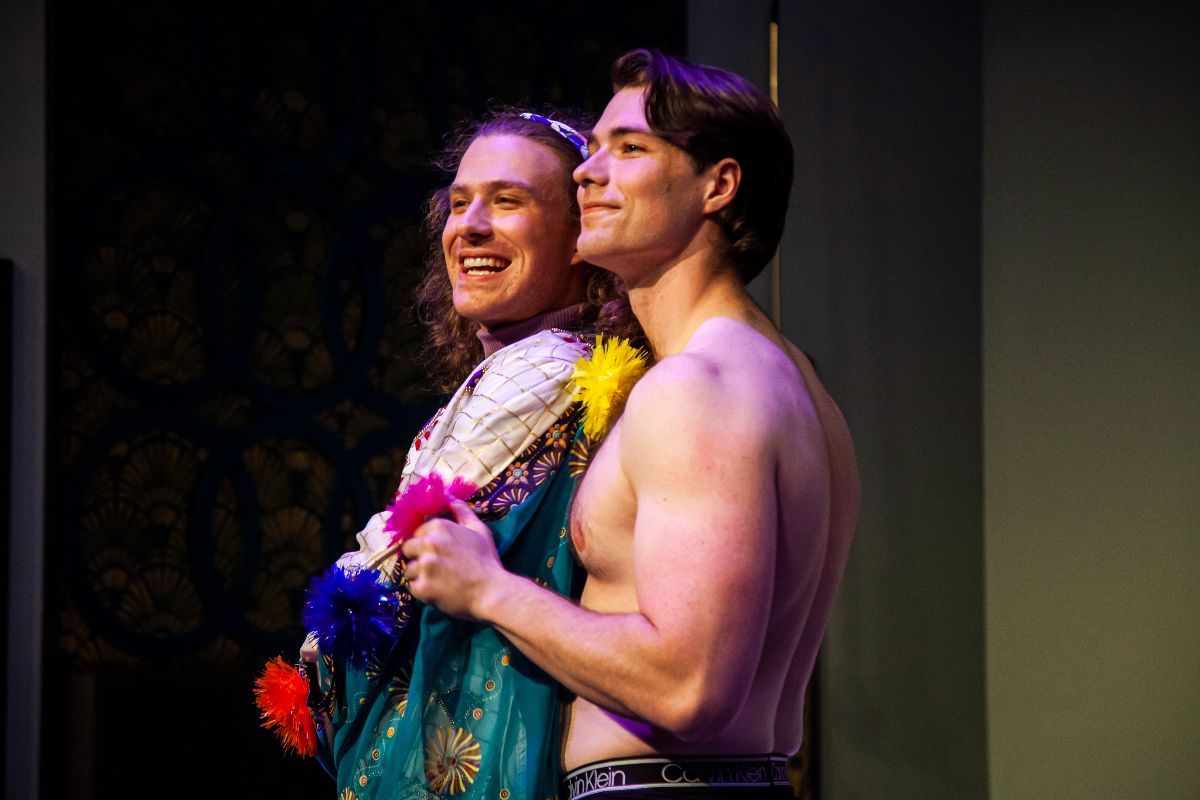 In keeping with the “tale of two plays” scenario, the show has two endings: The first is a silly ending to the farce: about how one character is actually related to another character and which characters are really Irish by descent and which ones are really English. (Note that in Britain, there would be more of a status difference about having Irish origins than there would be in the United States.) Note that it soon became burdensome for the audience to figure out every single machination that was driving the comedy—which the playwright intended to wrap up in a bow. The second ending (that is, to the serious story) is the one that advances an important message in the form of a monologue, which I won’t give away. You’d have to hear it for yourself, because it is so well-written. 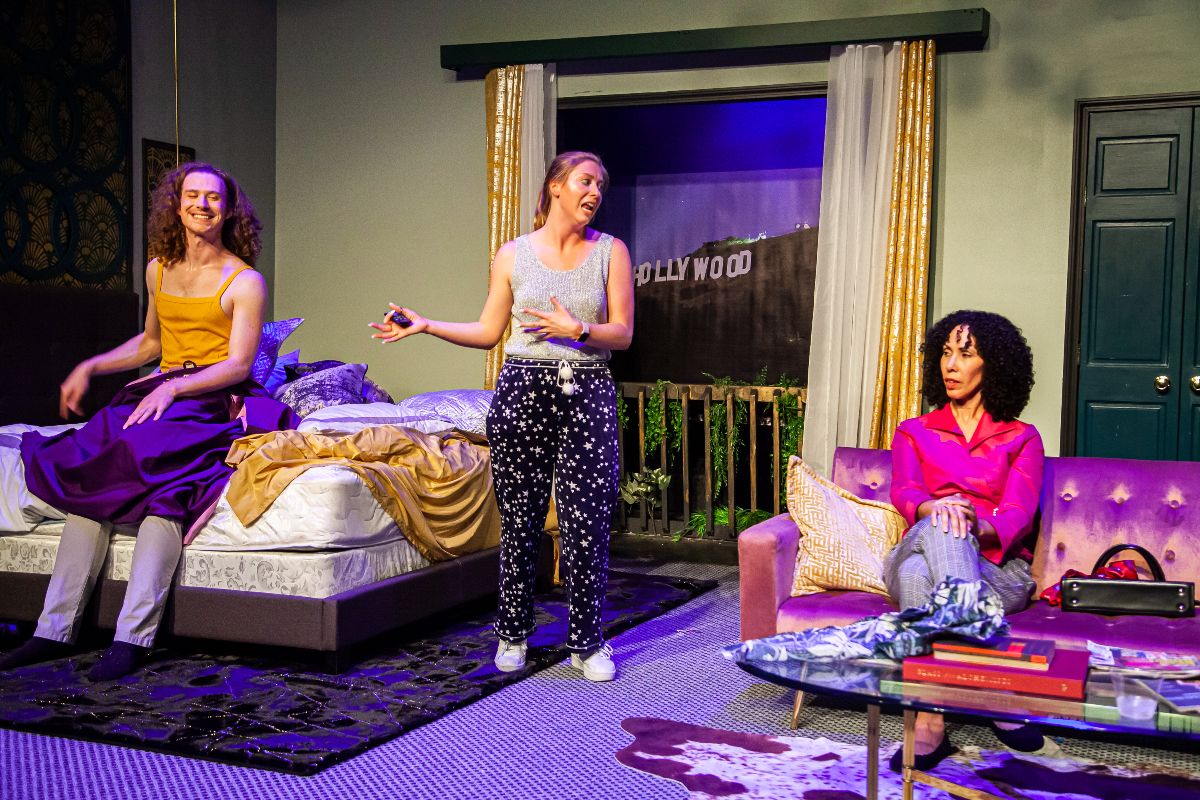 The title “Tommy on Top” has the double meaning of an actor being outstanding in their field while also being an allusion to Tommy’s sexuality. During the course of this 90-minute performance (with one intermission), Tommy grows and changes—and that is good—but we are not entirely certain why. Is it because he feels backed into a corner, or because he has finally hit bottom and has had to confront himself? Unfortunately, as the farcical elements become increasingly absurd, it becomes more and more difficult for us to truly understand his motivation. Thus while the character of Tommy is on top in several respects, the script “Tommy on Top” could have been written better. That being said, the production is a good one as is the underlying subject matter. And regardless of one’s sexual orientation or gender identity, this gay-themed show—while not the tops—is a meaningful one which everyone can relate to at some level.

Seniors and students are $30.

For tickets, see: https://www.goelevent.com/pridearts/e/Search and scroll down.

For more information about this show, go to: https://pridearts.org/tommy-on-top-by-chris-woodley/.

For general information or fa listing of other shows or to make a donation, please visit: https://pridearts.org/.