Review of “Home” by Julia W. Rath for TSP News

4 Stars, Highly Recommended!  Lewon Johnson, Rachel Blakes, and Tuesdai B. Perry astound us with their versatile acting in the dramatic play “Home”, written by Samm-Art Williams. “Home” is Williams’ best-known play and is a fictionalized biography about an African American orphan who grew up on his family’s land in Crossroads, South Carolina, and who went to prison for five years because of his opposition to the Vietnam War. Director Tim Rhoze has done a fine job with his interpretation of this minor classic, which tells a story near and dear to the director’s heart, one that he has always wanted to stage.

Johnson makes for an incredible Cephus Miles, whose story starts out as a recollection and ends exactly where it started. With Jim Crow and racial discrimination, being black man in America was hard enough in the 1950s and 1960s. But being a conscientious objector only makes things far worse for him. Miles is neither a Christian or a Communist but has a strong moral sense: He doesn’t want to kill people in a foreign land and simply wants to stay home and till his own property. Therefore, he serves time in prison for draft evasion. On his release, he learns that his land has been sold for taxes, and so he goes up North in order to earn a living. He goes to Baltimore, then lands in New York City. Initially he finds city life to be exciting, but not for long. Despite the fact that the Vietnam War has been discredited in the eyes of many Americans by the early 1970s, the bad rap of having once been in prison follows him around. Employers would hire him until they would find out about his prison record, and then they’d let him go. And, of course, his girlfriends would have no interest in dating a presumed deadbeat. Cephus’s most likely opportunity for employment is that being of a shoeshine “boy”, but he cannot even hold onto that. Denigrated into living as a homeless man on the street, he turns to drugs and prostitution—and smells bad. (There is even a song about that!) But it is his first girlfriend from his hometown, his true love Pattie Mae Wells (Rachel Blakes), who has faith in him and saves him from his terrible circumstances. Now a divorced woman of some means, she buys back Cephus’s land from the tax collector and deeds it back to him, so he finally gets the opportunity to return home. After an absence of thirteen years (from 1966 to 1979), the younger generation knows him only by reputation, and many in the community think he’s dead. Young children born in the interim think he’s a ghost, as he is seen from afar and doesn’t want to mingle with other people. But that is understandably so. 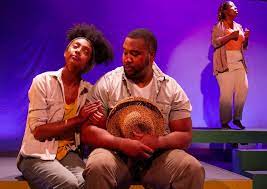 All of the many supporting characters are played by Woman One (Rachel Blakes) and Woman Two (Tuesdai B. Perry) who, together, create the vital energy that makes this show work. The presentation starts out with the two women singing so-called Negro spirituals, with Johnson tapping on rhythm sticks. This is an allusion to how the legacy of slavery and its racism persists into the present day. As we watch Cephus’s interaction with each of the characters that they portray, we quickly learn that it is the powerful people who ultimately make the decisions of how each of us spends our days on earth. This holds true regardless of changes in time period and circumstance—although we do see that some progress has been made with the elimination of the colored bathroom and the colored drinking fountain in the South. 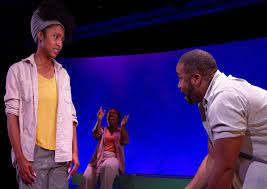 The show is a total of two hours and thirty minutes with one ten-minute intermission. It starts out on the slower side in the first act with all its nostalgia and picks up considerably in the second act as we watch the decline in Cephus’s moral fiber. The set design by Evan Spasato is very simple, with benches of different heights meant to represent seats, beds, tables, or anything elevated. By using a barebones approach with a minimum of costuming, set, and props, Rhoze has remained true to the original staging of the show, which is meant to replicate the Southern style of telling a good story. Accordingly, the lighting design by David Goodman-Edberg is adequate but not sophisticated. I especially liked the stage lighting prior to the start of the performance. One of the best parts of the show is the creativity in the use of space, such that it allows the audience to imagine all the surroundings. There is a pleasant fluidity when each of the supporting actors alternate among the various characters that they play. They do so by sometimes being the focal point of the action and sometimes by remaining flat and silent atop a bench when their character is not being featured. Sometimes the actors stretch into body poses that are unusual and unexpected, such as lying flat on their back or with their legs in the air. Whereas I thought all this was different, the guest I brought to the performance with me found it to be absolutely outstanding and brilliant! I can’t tell you how impressed she was with how gorgeous the directing is, particularly in communicating ideas verbally and nonverbally. 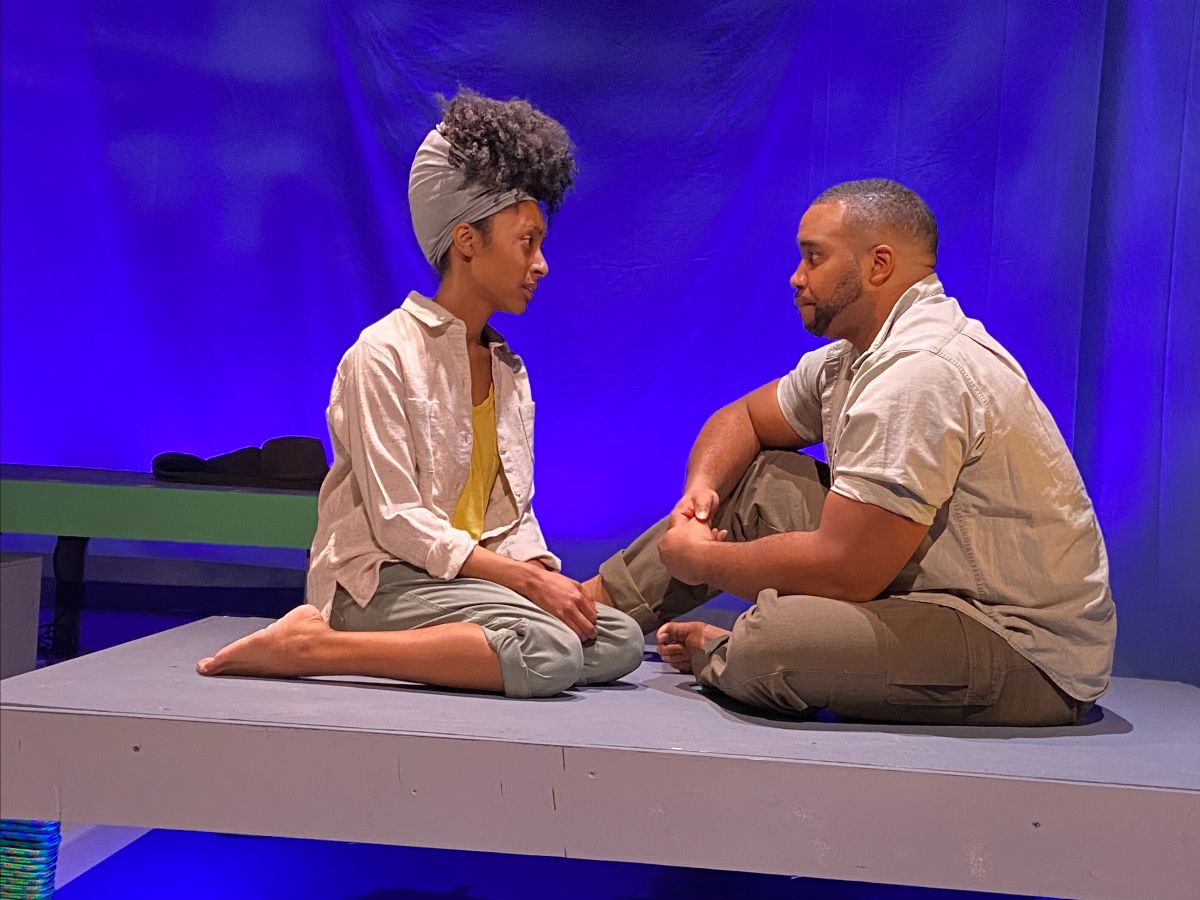 In all, “Home” is about how African Americans who move North have one foot planted in the South—and how those who move back to the South take some of the North back with them. It is as much a recent history as it is a contemporaneous tale of those who experienced life’s sorrows and frustrations first-hand during the 1950s through the 1970s. Inasmuch as this show points up racism in the United States, it similarly expresses the American dream of social mobility. Cephus and Pattie Mae are more alike than different in wanting to become better educated, which they see as the ticket for gaining improved opportunities for jobs, income, and solid marital prospects—so that they might become a part of mainstream society. Yet it is interesting how, later on, they both come to the conclusion independently that the ideal plane is having one’s own land and working on it to make it thrive. It is not necessarily having a higher education or attending church regularly that makes one truly free but, rather, living close to nature and in accordance with one’s moral principles and downhome values.

“Home” is playing at the Fleetwood-Jourdain Theatre at the Noyes Cultural Arts Center, 927 Noyes Street, Evanston through June 19, 2022.

Note that COVID restrictions are still in effect, and you will be required to show your vaccination card and ID and wear a mask at all times during the performance.