Raven Theatre, Chicago’s newest Equity-affiliated theatre, is pleased to welcome back audiences this fall with the world premiere of Joshua Allen’s The Last Pair of Earlies, directed by Wardell Julius Clark. This new drama, which follows the hardships and hopes of Wayland and Della Rose Early as they chase a sweet Southern dream on the South Side of Chicago, will play October 27 – December 12, 2021 on Raven’s 85-seat East Stage, 6157 N. Clark St. (at Granville) in Chicago. Single tickets and a variety of 2021-22 subscription packages are currently available at raventheatre.com or by calling (773) 338-2177. The press opening is Monday, November 1 at 7:30 pm. 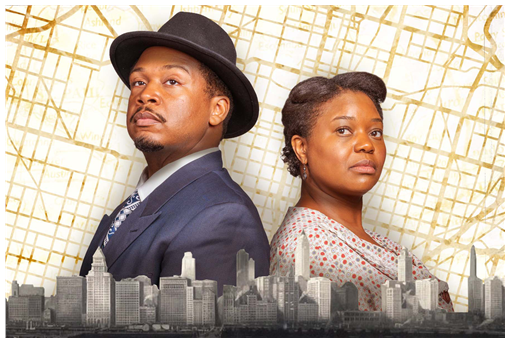 Marcus D. Moore and Shadana Patterson in a publicity image for Raven Theatre’s world premiere of The Last Pair of Earlies. Photo by Jenn Udoni.

Please note: Raven Theatre will require proof of vaccination and masking at all performances through the end of 2021. For all of Raven’s COVID-19 and vaccination information, visit raventheatre.com/covid-19.

Ever since he was a teenager in Mississippi, Wayland Early could count on two things – his talent for making handmade shoes, and the love of his bride, Della Rose. But danger forces them to flee north to Chicago. Before they know it, nearly two decades have passed, and both Wayland and Della find themselves increasingly unable to count on anything, including their marriage. As they each contend with the weight of their spent youth and unrealized dreams, a life-altering question comes to the surface: are we still enough for each other? Joshua Allen emerges from the award-winning writers’ room of Empire with a hometown world premiere.

Comments Raven Artistic Director Cody Estle, “We are excited to welcome playwright Joshua Allen to our theater. Joshua is a Chicago native and will be joining us during the creative process and we look forward to introducing his work to Chicago's theater community and to our audiences. We are equally excited to open our doors and get back to doing what we do best – making plays!”

Title: The Last Pair of Earlies

Curtain Times: Thursdays, Fridays and Saturdays at 7:30 pm; Sundays at 3 pm. Please note: there will not be a performance on Thursday, November 25 (Thanksgiving).

Joshua Allen (Playwright) is a Chicago native whose plays include The Last Pair of Earlies, The October Storm, Chrysalis and About Monday Morning. His work has been produced and developed at Hudson Stage, the Cape Cod Theater Project, Primary Stages, the Lark's Playwrights' Week and the John F. Kennedy Center for the Performing Arts. An alumnus of New Dramatists, he has also been a member of the Ars Nova Play Group and the Dorothy Strelsin New American Writers’ Group at Primary Stages. Joshua is a graduate of the University of Southern California and the Juilliard School. His television credits include In Treatment (HBO), Empire (FOX), Almost Family (FOX) and the upcoming From Scratch (Netflix).

Raven Theatre tells stories of today and the past that connect us to our cultural landscape. Through its plays, as well as its educational programming, Raven is committed to serving our communities’ needs through the arts.