On the morning of September 22, 2015, in Renfrew County, Ontario, a single man went on a killing spree, brutally murdering three ex-partners in their separate homes. They were victims in a crime now recognized as one of the worst cases of domestic violence in Canadian history. The murders devastated the rural Ottawa Valley community where baritone Joshua Hopkins grew up – his sister, Nathalie Warmerdam, was one of these women.

Hopkins has since set out on a journey to use his voice to wake people up to the global epidemic of gender-based violence – and their part in it. His call to action was answered by two exceptional creators. Jake Heggie, hailed by the Wall Street Journal as “the world’s most popular 21st-century opera and art song composer,” agreed to write the music, and Margaret Atwood, the Booker Prize-winning author of more than 50 books of fiction and poetry, including The Handmaid’s Tale, wrote the searing words. 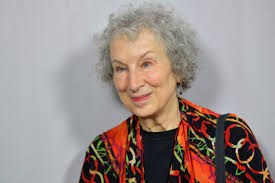 "I have known two women who were murdered, both by jealous former romantic partners, so the killing of Joshua’s sister resonated with me,” shares Atwood. “But I could not promise anything: with songs and poems, they either arrive or they don't. I then wrote the sequence in one session. I made the ‘sisters’ plural because they are indeed – unhappily – very plural. Sisters, daughters, mothers. So many."

“Margaret sent a perfect, complete set of 8 texts and asked, ‘How about something like this?’” recalls Heggie. “Josh and I were stunned and deeply moved. I am in complete awe of Margaret’s genius – and it was a great honor and privilege to explore every corner of her poems to shape this musical, emotional journey for Josh. The concept of the piece is something similar to Schubert’s epic Die Winterreise, with Josh as a wanderer. He walks through the world wondering how to make sense of this event, filled with grief and rage, on a quest for connection and transformation.”

The result is a set of 8 songs, collectively titled Songs for Murdered Sisters. Conceived as both a chamber piece for voice and piano, and as a fully orchestrated piece for voice and symphony orchestra, the work was co-commissioned by Houston Grand Opera and Canada’s National Arts Centre Orchestra. Though the originally scheduled live premieres in Houston and Ottawa have been postponed due to COVID-19, Songs for Murdered Sisters will now be accessible to worldwide audiences through a digital album and an accompanying film. 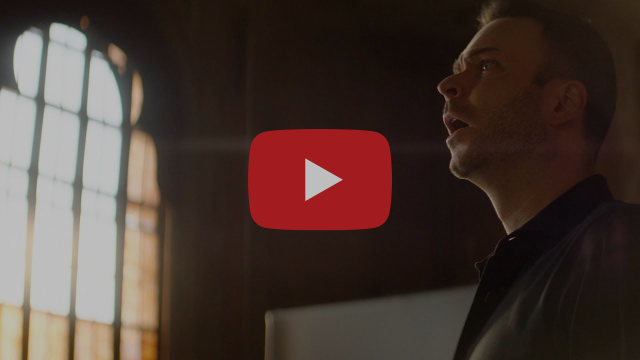 The Songs for Murdered Sisters film is directed by James Niebuhr.

The film version of Songs for Murdered Sisters, directed by James Niebuhr, will premiere with Houston Grand Opera on Friday, February 19, 2021. Accessible via the Marquee TV website and its Roku, Apple TV, and Amazon Fire apps, the film will stream for free in more than 20 countries for 30 days. The album, to be released on the Pentatone label with composer Jake Heggie at the piano, will be available for download on all major platforms on Friday, March 5, 2021, to align with International Women’s Day the following Monday.

Hopkins hopes that sharing this harrowing story through song will inspire other voices ­– of all genders – to take up the call in the future, providing hope and healing for countless families around the world who have been impacted by this global societal issue. More immediately, he intends to challenge other men to own their responsibility to end violence against women. Through a #WhiteRibbonSisters social media campaign, he aims to motivate 10,000 men to take the White Ribbon Pledge, promising “never to commit, condone, or remain silent about all forms of gender-based violence.”

“We thank Joshua for honoring the memory of his sister and all the sisters lost to gender-based violence,” said Humberto Carolo, Executive Director of White Ribbon and Co-Chair of the Global MenEngage Alliance. “We call on all men to join with us – together we can work toward a gender-equitable, safe, peaceful, and inclusive world.”

“I felt so numb after Nathalie’s murder,” admits Hopkins. “It was so shocking it was almost impossible to comprehend. But Margaret’s words and Jake’s music have opened a door, and stepping through it has allowed me to access all my complicated feelings surrounding Nathalie’s death. You don’t process grief in a linear fashion – any emotion can come up any time you’re experiencing an emotional influx. But meaning transforms grief into a more peaceful and hopeful experience. These songs have provided that meaning for me.” 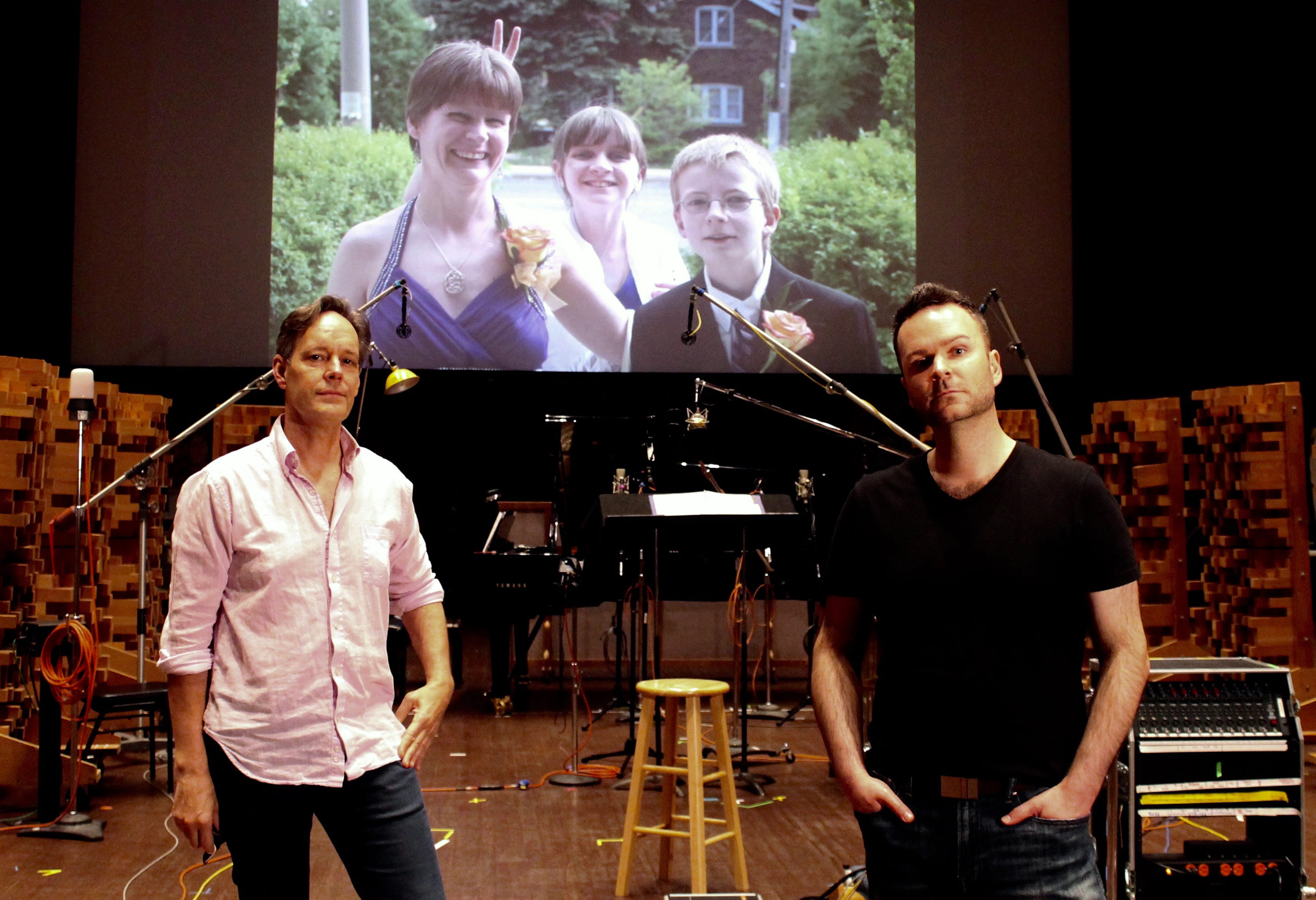 Composer Jake Heggie and baritone Joshua Hopkins always had a photograph of Joshua's sister Nathalie watching over them during their recording sessions. 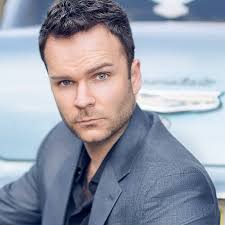 About Margaret Atwood
Margaret Atwood, whose work has been published in more than forty-five countries, is the author of more than fifty books of fiction, poetry, critical essays, and graphic novels. Dearly, her first collection of poetry in over a decade, was published November 2020. Her latest novel, The Testaments, is a co-winner of the 2019 Booker Prize. It is the long-awaited sequel to The Handmaid’s Tale, now an award-winning TV series. She lives in Toronto. 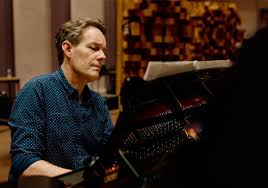 Jake Heggie is the composer of the operas Dead Man Walking, Moby-Dick, It’s A Wonderful Life, If I Were You, Great Scott, and Three Decembers, among others. He has also composed nearly 300 songs, as well as chamber, choral and orchestral works. The operas – most created with Gene Scheer or the late Terrence McNally – have been produced on five continents. Dead Man Walking (McNally) recently received its 70th international production, making it the most-performed American opera of our time. New York’s Metropolitan Opera recently announced it will produce Dead Man Walking in a bold new production by director Ivo van Hove, conducted by Yannick Nézet-Séguin.

About White Ribbon
White Ribbon is the world’s largest movement of men and boys working to end violence against women and girls, promoting gender equity, healthy relationships and a new vision of masculinity. Since its inception in Toronto in 1991, White Ribbon Campaign initiatives have been organized in over 60 countries around the world. Among its many calls to action, White Ribbon asks men to wear white ribbons as a sign of their pledge to never commit, condone or remain silent about all forms of gender-based violence. White Ribbon works to examine the root causes of gender-based violence and create a cultural shift that helps bring us to a future without violence.