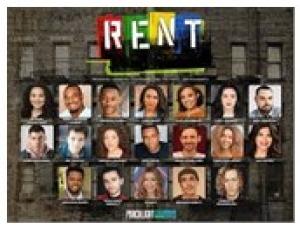 *** Recommended *** Sometimes directors have a vision for a new approach to a musical.  Sometimes it works, sometimes it fails   Porchlight Music Theatre’s production of Rent it didn’t just fail, it collapsed.  Rent was written as a rock opera about starving artists with all their angst and desperation.  It should be a little ragged, a little dirty, and a lot defiant.  This wasn’t.  Most of the songs were sung in one key – loud.  I really missed the emotion and nuance of Larson’s original score.  3 Spotlights

Rent is based on Puccini’s opera, La Bohème.  Instead of attics, the artists live in lofts.  Instead of tuberculosis, Angel dies of AIDS and Mimi becomes an addict on the streets.   Playwright Jonathan Larson. a starving artist himself, lived in some horrible places.  He based most of the characters on people he knew.

Somehow, young artists struggling to survive, always seem to find each other.  They can be found in low-rent neighborhoods, in the worst living conditions, suffering while they create.  In Rent, it’s New York’s lower East Side, in an area known as Alphabet City.

Mark Cohen (David Moreland), aspiring filmmaker, Roger Davis (Shraga D. Wasserman), musician/song writer, and Tom Collins (Eric Lewis), computer genius and anarchist, are living in a loft in a building scheduled for demolition.  They don’t have heat, an extension cord brings in their only electricity, but the answering machine on the phone always seems to work. 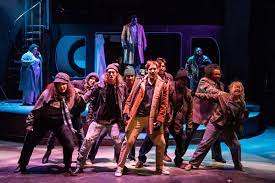 On Christmas Eve, Mark starts filming a documentary while Roger struggles to write a song.  Roger, who is HIV positive, is mourning his girlfriend who died of AIDS.  Mark is kind of bitter because his girlfriend, Maureen Johnson (Lucy Godinez), a performance artist, left him for Joanne Jefferson (Teressa LaGamba), a lawyer and a lesbian.  On his way home, Tom is mugged and rescued by Angel Dumott Schunard (Josh Pablo Szabo), a gorgeous drag queen.  Meanwhile, Mimi Marquez (Alix Rhode), their downstairs neighbor, wanders upstairs looking for a match to light her candle.  She and Roger start a relationship. 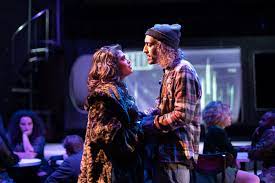 Benny – Benjamin Cofffin III (Abraham Shaw) – their landlord and former roommate (he married money) tells them that he’s going to evict the denizens of a tent city on the lot next door and build a Cyber Studio, and by the way, if they don’t pay all the rent they owe for the past year, he’ll evict them too. 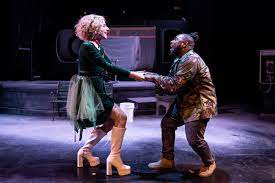 The set was basically a sets of steps and platforms, all in black, except for a huge screen (which is sometimes silvery) flanked by something that looks like a silver letter ‘d’ – which turns out to be a door – and a reversed ‘d’ on the other side.  That is often outlined in neon.  Not my idea of a loft!

For some reason, Director Adrian Abel Azevedo decided to project TV fuzz followed by some of Mark’s film footage on a white sheet hung across the stage. The cast has to pull that sheet back and forth, and it never seemed to move correctly, at one point blocking half the stage from view. 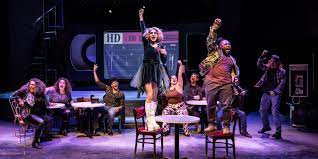