THE PLANE THAT TOOK A TRAIN, A Musical Play Podcast For Today's Youth, Announces Six-Episode Launch 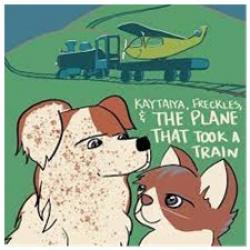 Through Druker’s love of fairy tales and his understanding of the intricate workings of the mind, THE PLANE THAT TOOK A TRAIN explores serious issues that often go unspoken. Inspired by classics such as The Princess Bride and The Wizard of Oz, the script features colorful characters amplified by insightful lyrics and fifteen tuneful songs co-written by Dawson and Druker. Originally written as a theatrical production, the musical play was cast with actors of all ages and ready to hit the stage just as the pandemic ceased live theatre in March 2020. Druker took the challenge as a new opportunity to bring his story to life.

“I couldn’t imagine abandoning this project, so I thought let’s make it a radio play and leave the visuals to the imagination,” said THE PLANE THAT TOOK A TRAIN co-creator Bob Druker. “The script was brought to life when we directed 14 actors over Zoom and miraculously combined the tracks for a cohesive performance.”

THE PLANE THAT TOOK A TRAIN chronicles an unlikely team on a journey to break an evil king’s spell to save their homeland, Zintaurus. They are led by young heroine Kaytaiya, a dog who takes on the body of a cat thanks to some magic. Listeners also meet Eorik, a kitten eager for his chance to finally become a cat; Freckles, a one-armed dog unable to say names out loud; Joe, a sidelined locomotive under a dark spell; and the Little Plane, who has been unable to fly due to a tragic accident. Each episode follows their adventure within the wondrous world of THE PLANE THAT TOOK A TRAIN.

As a timely creative work, THE PLANE THAT TOOK A TRAIN supports youth today and in the future to overcome trauma, defend truth and learn to love and heal. This magical experience is aimed at kids seven and up but will be enjoyed by listeners in all stages of life.

THE PLANE THAT TOOK A TRAIN reflects Druker’s passion for the well-being of children and pets, leading to a suggested donation at the end of each episode to benefit the Collaborative for Leadership in Ayres Sensory Integration (CLASI) and the Wisconsin Humane Society.