A cornerstone of the experience offered by The Performer’s School, a musical theatre training program for fourth through eighth graders located on Chicago’s North Shore in Highwood, is the opportunity to perform for audiences in a fully staged production of a hit Broadway musical.

Before the pandemic, 26 fourth and fifth graders had been cast in the school’s planned productions of DISNEY’S BEAUTY AND THE BEAST JR., and 40 sixth through eighth graders were cast in LES MISÉRABLES SCHOOL EDITION.

With in-person performances prohibited under the quarantine, The Performer’s School co-founders Stacey Flaster and Liz Fauntleroy found a way to provide these students with an equally satisfying, but COVID-safe, performing experience. The finished products will be streamed from May 21-23 and 28-30 for LES MISÉRABLES and May 28-30 and June 4-6 for DISNEY’S BEAUTY AND THE BEAST JR.

Sullivan had been experimenting with editing technology that would allow performers to be recorded individually in front of green screens and edited so that the actors appear to be performing together on a stage, and he saw a way to use this technique to meet the demands of a large cast musical theatre production. As employed for the two Performer’s School productions, Sullivan’s technique creates the effect of having from two to 40 singers and actors appear to be performing on a single stage simultaneously, in front of elaborate and detailed backgrounds designed by three-time Jeff Award winner Jeffrey D. Kmiec.

Film production and editing techniques allowing use of closeups and special effects are being used to further create a cinematic product that is more visually engaging and satisfying than many of the Zoom readings that have become common in the past year. Typically, such Zoom performances have relied on actors performing from separate locations and appearing on separate cameras, a format that has become predictable and can lack much of what makes theater and film so exciting.

Here’s how the two musicals are being produced.

Students Zoomed in twice a week to learn music, blocking, choreography, and character development.  Once COVID regulations allowed, each masked student went into a studio to meet with TPS’s conductor/music director/editor Jeff Poindexter and Sullivan.  Poindexter recorded each performer’s vocals from behind a plexiglass screen separating him from them. The individual vocal tracks - from solos to big ensemble numbers - are now being mixed with an existing orchestral track to complete the soundtracks of the two musicals in preparation for opening dates in late May.

While at the one-on-one vocal sessions, the kids enjoyed costume fittings with costume, set and prop designer David Geinosky. Geinosky built hundreds of costumes for each of these productions with Mindy McDonald providing additional costumes for LES MIS.

Students had individual filming sessions where they shot their scenes in full costume and make up, with help from costume designer Geinosky to get into their many costume changes. They were shot in front of a green screen to allow for Kmiec’s beautiful backgrounds to be added during editing.  Sullivan, along with actress Elizabeth Telford and editors Peter Robel and David Sajewich, worked with each student to shoot their scenes in front of the green screen and lip-synch to their own voices one person at a time. 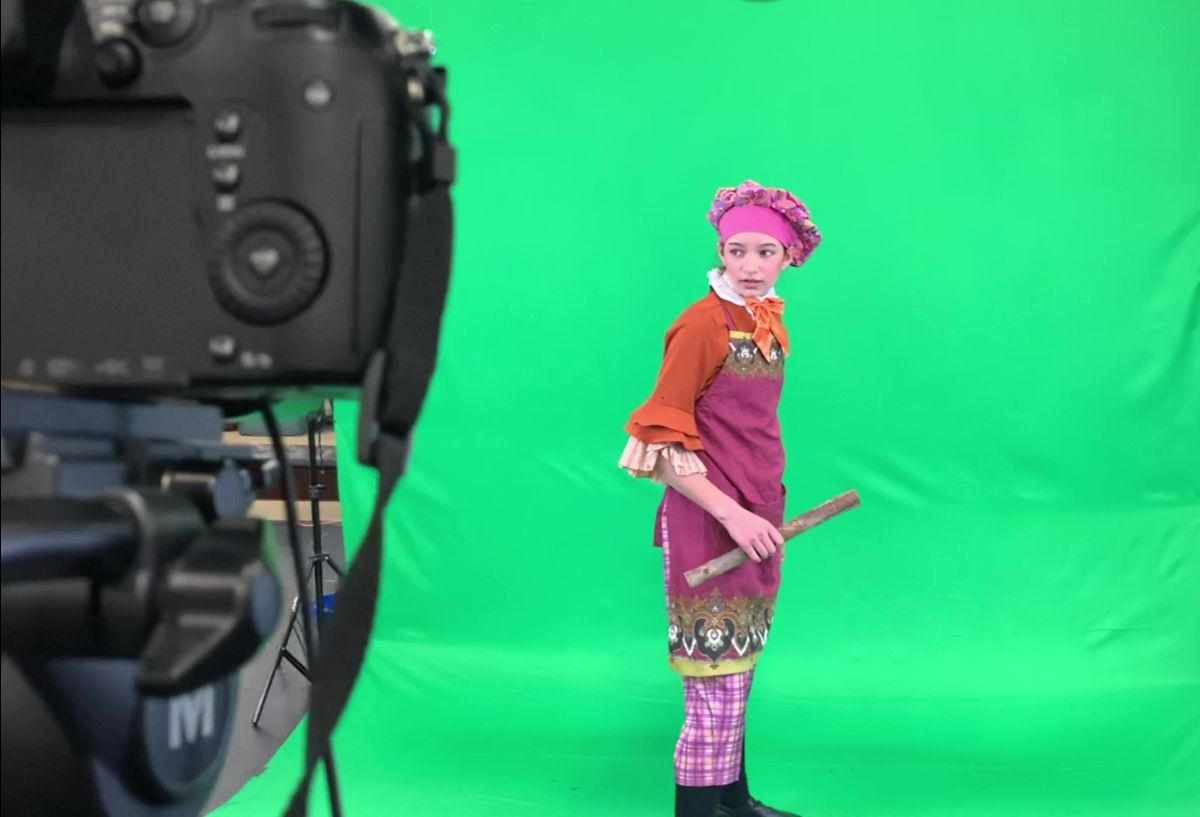 Cast member Samantha Koerner from DISNEY'S BEAUTY AND THE BEAST JR. performs for the video camera, later to be edited into a single frame with fellow cast members. Photo credit - Peter Marston Sullivan.

The editors are now taking the footage and editing actors together in front of the backgrounds with anywhere from one to 40 performers appearing in a frame, just as audiences might see them on stage or in a film, rather than in a Zoom checkerboard.

“We truly believe that this process has been unique and special for all of us,” said Fauntleroy. “We have heard such great things from The Performer’s School families. Not only did their children have an amazing theatrical experience, but also most importantly they stayed connected with their theater friends during an extraordinary time in our world.”

Student Ethan Michaels, a seventh-grader from Lincolnshire who will appear in LES MIS, said “Being in this show has been the best part of the pandemic for me. I have been with The Performers School since I was nine years old, and when I thought the show would be cancelled, I was devastated. But the film is something new and exciting. It’s cool knowing you’re a part of something no one else has done before. Not to mention it’s doing something I love. This has been an amazing experience and I’m lucky to get to do this.”

ABOUT THE PERFORMER’S SCHOOL

The Performer’s School, founded by professional director and choreographer Stacey Flaster and private voice coach Liz Fauntleroy, is a musical theatre training program located on Chicago’s North Shore in Highwood.  Class and performance instructors are professional actors, directors, choreographers, and artists from all over the country.  The professional level shows enrich students’ lives and help them become better versions of themselves.  The Performer’s School runs the Troupe (fourth and fifth graders) and Ensemble (sixth, seventh and eighth graders) audition-only programs. Lisa Sobelman directs Troupe and Flaster and Fauntleroy direct Ensemble.