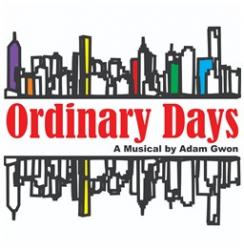 Canterbury Theatre’ third musical of the season, “Ordinary Days” is an intimate chamber musical about four people trying to find their way in the big city.  It’s a charming and very moving show and I highly recommend it.  3 ½ Spotlights.

Thirty-something Jason (Jacob Ryan Martinez), finally ready to commit, he thinks, is moving in with his girlfriend.  Claire (Anna Holmes), on the other hand, isn’t so sure.  In fact, she’s having a difficult time making space for Jason – in her life as well as in her apartment.  Their songs - “The Space Between,” Let Things Go,” I’m Trying,” and “Fine” – reflect their doubts. 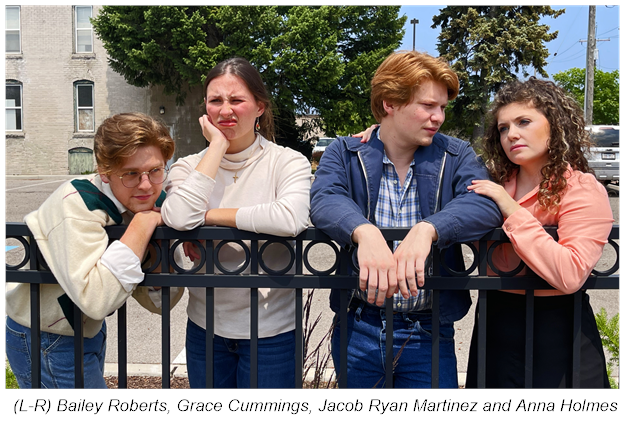 Warren (Bailey Roberts) is a ditzy guy who is thrilled to be house/cat sitting for a graffiti artist currently incarcerated for his art.  He occupies his time handing out fliers – he’s proud to say he created them himself – covered with some of the artist’s favorite thoughts.  Warren definitely ‘marches to a different drummer.’

I love Deb!  She is impatient, irascible, and so not calm she’s on the verge of a total meltdown.  Her computer is on its last leg, so her thesis notes are all handwritten in a notebook which she lost.  She’s on a deadline, so she tries to explain this disaster and salvage her grade in an email.  One of the funniest songs in the show, “Dear Professor Thompson” starts out logically enough, then descends rapidly into total insanity.

When Warren finds her notebook (he loves picking up bits and pieces of other people’s lives and keeping them – an unopened two-year old Valentine, for example) he sends an email suggesting they meet in a gallery at the Met.  Deb, who never, ever gets lost, can’t figure out the Met’s map, gets very close to meltdown before Warren finally finds her.

The defining moment in “Ordinary Days” occurs on the roof of Warren’s artist’s building – when Warren throws all of his pamphlets into the air and Deb joins in with pages from her thesis notes – an event Jason and Claire, both on the street below, interpret as a sign. 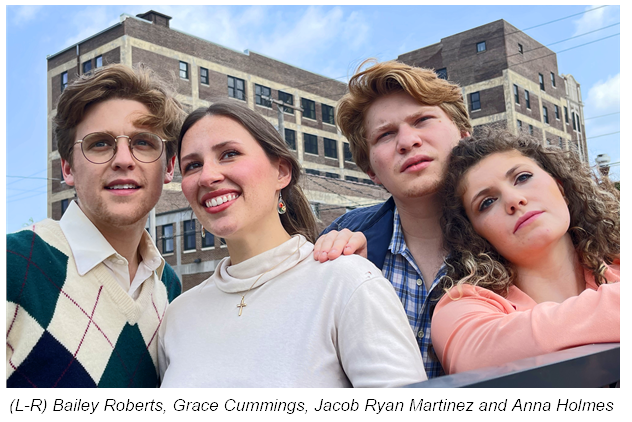 I really enjoyed “Ordinary Days.”  The amazing Ellen Perkins is onstage playing the piano accompaniment.  By the way, there is almost no dialog in this show.  That said, the music is terrific with lyrics that are crisp, clever and funny.

“Ordinary Days” runs through July 31st at Canterbury Summer Theatre, 807 Franklin Street, Michigan City.  Running time is approximately one hour, 45 minutes, with an intermission.  Next up at Canterbury and concluding their summer season, “Dr. Jekyll and Mr. Hyde”, running for just three days, August 5th-7th.  Artistic Director Ray Scott Crawford, who is the Dean of the Division of Communication and Performing Arts at Bossier Parish Community College, will be bringing this production – lock, stock and complete cast – directly from Louisiana.   You won’t want to miss this show!  Performances are Thursday at 2:00 pm, Friday at 7:30 pm; and Saturday at 6:30 pm.  Tickets are $17 with discounts for seniors and students.  FYI (219) 874-4269, www.canterburytheatre.org.