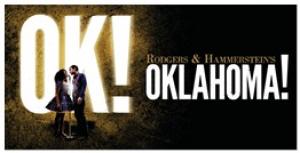 Broadway In Chicago is delighted to announce the opening of Rodgers & Hammerstein’s OKLAHOMA! The critically acclaimed, Tony Award-winning production of Rodgers & Hammerstein’s OKLAHOMA! will play Broadway In Chicago’s CIBC Theatre (18 W. Monroe St.) for a limited engagement. Tickets are on sale now for performances through January 23 at www.BroadwayInChicago.com.

Directed by Daniel Fish, this is OKLAHOMA! as you’ve never seen or heard it before—reimagined for the 21st Century, and now the Tony Award winner for Best Revival of a Musical.

Direct from an acclaimed run on Broadway comes an OKLAHOMA! that looks and sounds like America today. The Daily Beast raves “Forget your traditional idea of OKLAHOMA!. Daniel Fish’s daring, utterly absorbing re-interpretation is different—brilliantly so.”

OKLAHOMA! tells a story of a community banding together against an outsider, and the frontier life that shaped America. Upending the sunny romance of a farmer and a cowpoke, this production “lets us experience Rodgers and Hammerstein’s greatness anew.” (The New Yorker). Without changing a word of text, this visionary production allows the classic musical – and our country – to be seen in a whole new light.

“This is the OKLAHOMA! that was there all along.” (New York Magazine).

OKLAHOMA! features music by Richard Rodgers and a book and lyrics by Oscar Hammerstein II, based on the play Green Grow the Lilacs by Lynn Riggs, with original dances by Agnes de Mille.

TICKET INFORMATION
Individual tickets for Rodgers & Hammerstein’s OKLAHOMA! are on sale now and range from $27 to $98 with a select number of premium tickets available. Tickets are available now for groups of 10 or more by calling Broadway In Chicago Group Sales at (312) 977-1710 or emailing GroupSales@BroadwayInChicago.com. For more  information, visit www.BroadwayInChicago.com.

ABOUT BROADWAY IN CHICAGO
Broadway In Chicago was created in July 2000 and over the past 21 years has grown to be one of the largest commercial touring homes in the country. A Nederlander Presentation, Broadway In Chicago lights up the Chicago Theater District entertaining more than 1.7 million people annually in five theatres. Broadway In Chicago presents a full range of entertainment, including musicals and plays, on the stages of five of the finest theatres in Chicago’s Loop including the Cadillac Palace Theatre, CIBC Theatre, James M. Nederlander Theatre, Auditorium Theatre, and just off the Magnificent Mile, the Broadway Playhouse at Water Tower Place.

COVID-19 Protocol: Audience members are required to be masked and show proof that they are fully vaccinated. Those with exemptions, including children, must show proof of a negative COVID-19 test. Vaccine cards and negative COVID-19 test must be shown along with a photo I.D. and valid ticket. No home tests are accepted and due to COVID-19 protocol, children under 2 are not allowed into the theatre. No food or beverages will be served or allowed in the theatre. For further information including types of vaccines or testing details visit BroadwayInChicago.com/COVID19.