The Office Experience Makes US Debut in Chicago October 15th

This fall, fans of The Office will be transported to the world of Dunder Mifflin Paper Company when The Office Experience makes its debut in Chicago on October 15th .  Fans are invited to celebrate their favorite moments and characters from the widely acclaimed television series in the largest official interactive fan experience based on The Office, created by Superfly X and Universal Live Entertainment in consultation with The Office’s U.S. creator Greg Daniels.

The Office Experience will be located at The Shops at North Bridge on the Magnificent Mile at 540 N. Michigan Ave. (corner of N. Michigan Ave. and E. Ohio St.) Tickets are on sale exclusively at www.theofficeexperience.com. 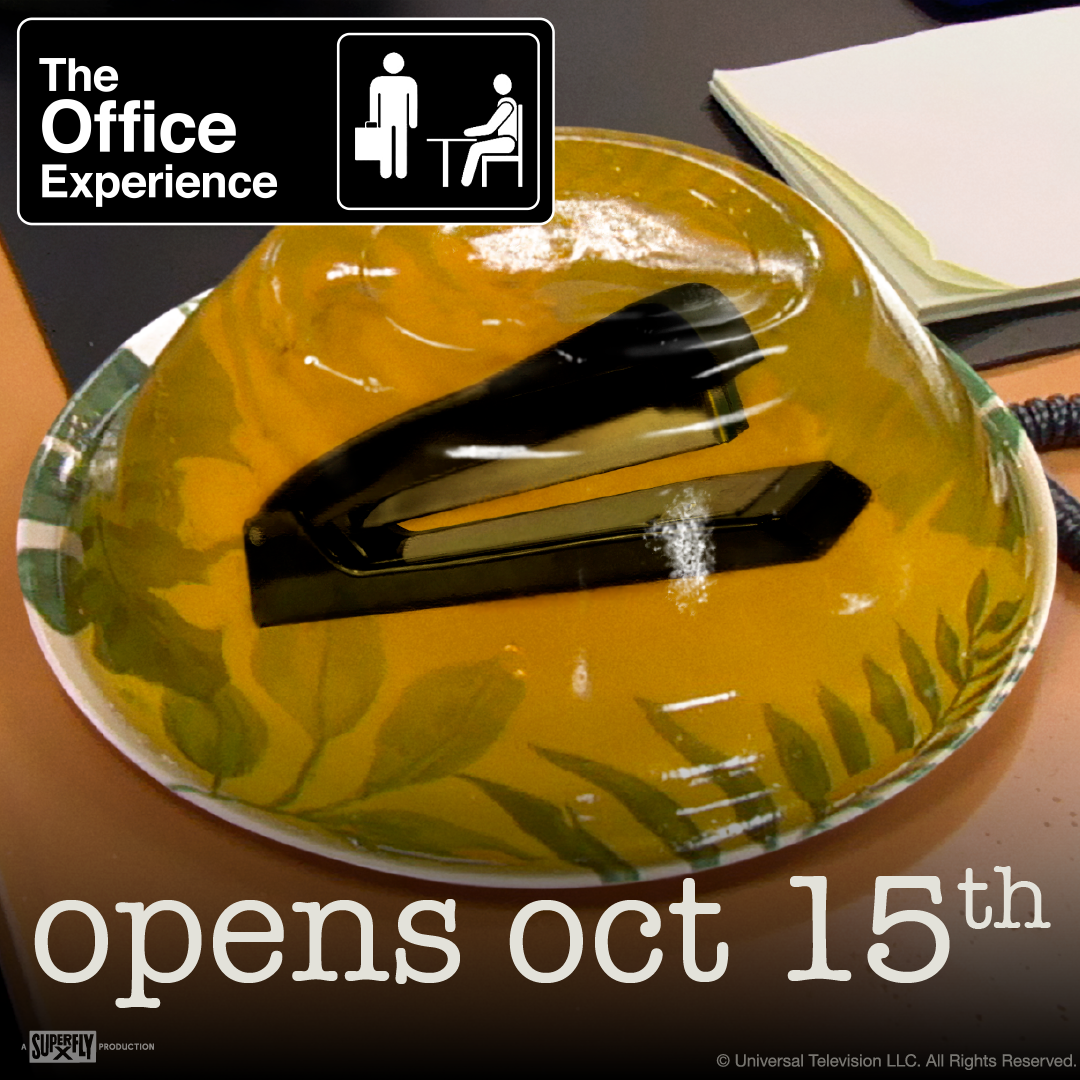 The interactive two-story experience features 17 rooms filled with original props and costumes, set re-creations and more as fans visit Scranton Business Park and other sites associated with the beloved series. Guests will be able to take pictures throughout the Dunder Mifflin office including Pam’s desk, Michael’s office and Ryan’s closet as well as Schrute Farms. Fans will relive iconic episodes and memorable moments such as Kevin’s Chili Spill and Beach Day. The Office Experience will celebrate all the series’ major characters and will also commemorate, among many other things, the Dundie Awards and Jim and Pam’s love story.  An on-site themed retail store replicating the Warehouse, featuring exclusive products never before offered for sale will be open to both ticketed and non-ticketed guests.

“We are thrilled to partner with Universal Live Entertainment to create The Office Experience, the first official interactive experience based on The Office,” said Stacy Moscatelli, Co-President and Chief Strategy Officer of Superfly X. “We have no doubt that this incredible city, with its millions of residents and visitors, will provide the perfect backdrop for the world premiere of The Office Experience.”

”We are delighted that Superfly X is presenting the world’s largest official interactive fan experience based on the beloved series, The Office,” said Michael Silver, President of Global Business Development for Universal Parks & Resorts.  “Fans will not only relive memorable episodes from the series but will themselves be able to participate in some of its most iconic moments.  The Office is more popular than ever, and we are thrilled that its millions of fans around the world will now be able to live the experience as well as view it on Peacock.”

The Office Experience will be open through January 17th, 2022.  Guests can reserve timed entry tickets starting at $37.50 plus taxes and fees. Tickets can be purchased by visiting www.theofficeexperience.com. Private access tickets, as well as corporate and private rentals, will also be available. For more information on space rentals, email privateevents@theofficeexperience.com.

Fans can catch up on all nine seasons of The Office including never-before-seen and deleted scenes, bloopers, featurettes and interviews as well as The Office: Superfan Episodes. Peacock now has Superfan Episodes available for Seasons 1, 2 and 3. For more about The Office on Peacock, visit peacocktv.com.

Superfly X is the global themed entertainment division of Superfly. Founded in 2020, Superfly X is transforming the way fans interact with their favorite entertainment properties with The FRIENDS Experience. Superfly X is building on its expertise in creating iconic live experiences like Bonnaroo Music & Arts Festival, Outside Lands and Clusterfest as well as for some of the most recognized brands in the world. Superfly is headquartered in New York.

Universal Live Entertainment partners with best-in-class entertainment companies to bring today’s most popular stories, characters and adventures to life in a city near you. From larger-than-life touring shows to immersive, walk-through exhibitions and family entertainment centers, Universal’s world-class entertainment brands are delivered across the globe for families, friends and people of all ages to enjoy. Productions include Jurassic World Live Tour, Jurassic World: The Exhibition, A Minions Perspective, DreamWorks; The Exhibition, Trolls LIVE, Film to Live Orchestra concerts and more.