Chicago Danztheatre Ensemble (CDE) is proud to announce its return to the stage and kick of its two-year 20th Anniversary retrospective season with a live remount of its September 2003 production of “The Yellow Wallpaper,” choreographed and Directed by Executive Artistic Director Ellyzabeth Adler with the cast. This show will be performed on a split bill with RE|dance Group’s “The Attic Room,” choreographed by Michael Estanich. 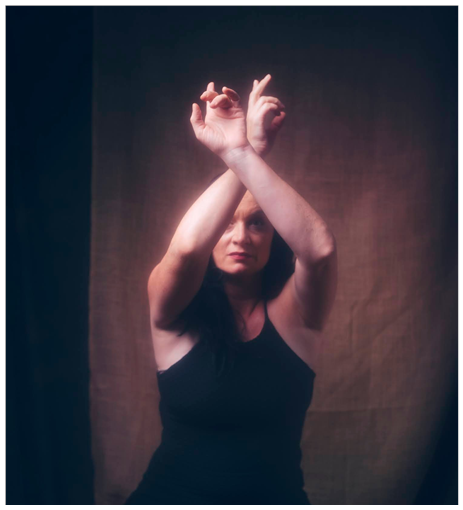 Based on Charlotte Perkins Gilman's gripping 1890 short story, this new interpretation will be positioned as a tale of a 2021 post-pandemic landscape. When one woman in the throes of postpartum depression also battles with her own rapidly vanishing sanity, her physician husband gives her the "rest cure."  As she retires to her bedroom, she becomes hypnotically fixated on the yellow wallpaper patterns that eventually take on the forms of other trapped women. These women reflect her depression and confinement through both monologues and modern dance as she hypnotically follows the patterns in the paper. The familiar feeling of mental and physical isolation will leave audiences embracing the freedom of a world still reeling from the effects of COVID-19.

Executive Artistic Director Adler wanted to remount this production of “The Yellow Wallpaper” to open the 20th anniversary retrospective season, which will be celebrated through 2022, as a response to the global pandemic. “After a year of shelter in place, many people feel they are similar to these women in the yellow wallpaper, longing for connection and community. Being a single mother by choice, I had my support system in place to help me through the first several months of my daughter’s life,” said Adler. “When shelter in place happened, my baby was two weeks old. I saw only my doula for six weeks. In the middle of the night, when my baby would cry, I would walk around my house feeling trapped yet scared to go outside because of COVID-19. One day, staring hopelessly at my bookshelf, I saw a copy of “The Yellow Wallpaper.” I realized I was living this book. Our world is living this book. My hope through remounting this production with a new understanding is to offer a communal grieving for this last year, but also to build collective understanding and healing.”

Also performed with “The Yellow Wallpaper”

“The Attic Room” is an intimate dance story of escape and desire. The dance theatre work for seven dancers reveals the thin line between resignation and hope. Images unfold through sharp dancing and poetic text in a space filled with the forgotten memories of the past.

The production includes an art gallery reflecting the show’s particular themes. The gallery opens at 7:30 p.m. and closes 30 minutes after the performance ends. Also in the gallery area will be representatives of Chicago organizations that complement and expand on the subject matter of each performance.

COVID PROTOCOL FOR ALL PERFORMANCES

Following current guidelines from federal, state and local government and its agencies, audience members must show proof of vaccination or wear a mask at all times during the performances. All performers and participants in this CDE performance are vaccinated and will perform without masks.

Founded in 2001, Chicago Danztheatre Ensemble is Chicago’s only multidisciplinary arts organization dedicated to social justice and socially conscious work that builds community through the arts “one voice, one story, one person at a time.” CDE’s mission is to engage, inspire, and challenge the community, both onstage and in the classroom, through innovative and collaborative multidisciplinary storytelling to illuminate aspects of social issues. We do this in the genre of Tanztheatre, "which unites all art media to achieve an all-embracing, radical change in humankind.” Through our school-based art and performance programs, CDE helps students in Chicago schools explore their own creativity, supporting their social and emotional learning. CDE provides a physical and emotional space where community conversation and cultural change can happen.

For our performance series, CDE is dedicated to creating performances that blend together dance, theatre and visual art to tell stories about the human condition. We give an artistic voice to those who are not always heard.

Chicago Danztheatre Ensemble (CDE) is proud to announce its return to the stage and kick of its two-year 20th Anniversary retrospective season with a live remount of its September 2003 production of “The Yellow Wallpaper,” choreographed by Executive Artistic Director Ellyzabeth Adler with the cast and assistant choreographer Kelly Anderson. This show will be performed on a split bill with RE|dance Group’s “The Attic Room,” choreographed by Michael Estanich. Performances will be held Fridays and Saturdays, November 5 – 20, in the Auditorium at Ebenezer Lutheran Church, 1650 W. Foster Ave. Tickets are on sale now for $20 general admission (adult non-students), $13 student general admission (high school students over the age of 16 and college students) and free general admission (under the age of 16). Ticket sales online end two-hours before the performance but will be available at the door for $35. Information and tickets are available at Danztheatre.org.