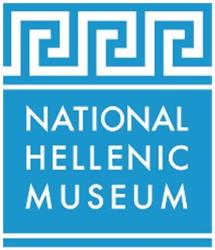 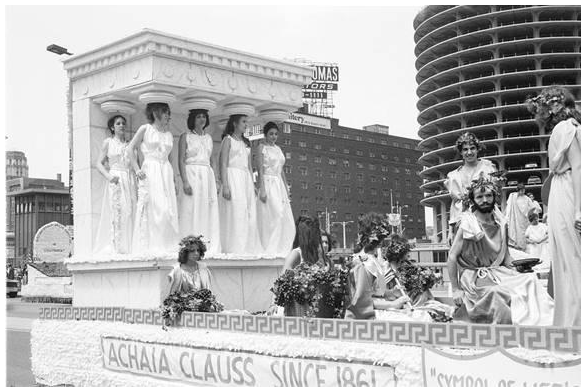 “Our mission at the National Hellenic Museum is to share Greek history, art and culture, and the Greek American experience. Diane’s works vividly capture how Chicago’s Greek American community gathers in the public space to show pride in its identity and share its culture. Through her images of other ethnic and cultural celebrations, Diane also explores the universality of how Chicagoans gather together to show pride in their diverse communities,” says NHM Executive Director Marianne Kountoures.

Storytelling in Cloth and Light (open run beginning September 16, 2022) presents a series of textiles and photographs side by side. The textiles, part of NHM’s expansive collection of more than 10,000 Greek American artifacts, were meticulously woven in Greece, largely by women, and brought across the ocean to the United States. The photographs are additional images from Diane Alexander White, which capture the people and landscapes of Greece in 1977, including her father’s village of Poulithra. Together, these artifacts tell stories connecting audiences with the people, places and events of the past—and encouraging viewers to remember their own stories.

Photographs from film begin as negative images which are developed in the darkroom where a positive print is created. As a lifelong Chicago photographer, Diane Alexander White has explored the negative and positive effects of photography since 1972. Her father Angelo D. Alexander, who emigrated from Greece in 1920, became an avid photographer and shared his knowledge of the camera with his daughter, Diane. While attending the University of Illinois Chicago she took her knowledge of photography one step further by learning the ways of the darkroom. Photography instructor Robert Steigler opened her eyes to the art of capturing the street image as he was influenced by Harry Callahan, Arthur Siegel, Aaron Siskind and others at the Institute of Design (IIT). Upon graduating in 1976, she began working in studios and darkrooms and continued with her street photography. In 1983 Diane was hired by Field Museum head photographer Ron Testa to photograph natural history collections and she continues to work there to this day. For more information, visit dawhitephotography.com.

About the National Hellenic Museum

The National Hellenic Museum (NHM) is a premier museum dedicated to sharing Greek history, art and culture, from ancient times to the present day, including the modern Greek American experience. NHM preserves the Hellenic legacy and makes this rich heritage relevant today through its collection of thousands of physical artifacts, oral histories, exhibits, educational programs and special events. Originally founded in 1983 and located in Chicago’s historic Greektown neighborhood since 2011, the NHM provides lifelong learning for the community and sparks inquiry and discussion about the broader issues in our lives and society. Museum hours are Thursday-Sunday from 10 a.m.-4 p.m. For more information, visit nationalhellenicmuseum.org or call 312-655-1234.