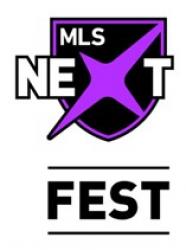 MLS NEXT today announced details for the inaugural MLS NEXT Fest, which will feature over 300 of the top youth teams across the United States and Canada competing in the MLS NEXT Fest Showcase and Generation adidas Cup Qualifiers. The five-day event will be held at SilverLakes Sports Complex in Norco, Calif., Friday, December 3 through Tuesday, December 7.

The MLS NEXT Fest Showcase will be comprised of over 260 MLS NEXT teams in four age groups (U15, U16, U17, and U19). All teams will play three games in four days and are seeded in groups based on their performance in the fall portion of the 2021-22 MLS NEXT regular season.

For the full schedule of the week’s games and activities by age group and event, please click here.

MLS NEXT Fest provides an opportunity for North America’s top youth talent to be seen by college, national team, and professional coaches, scouts, and evaluators in a singular location.

Notable attendees include U.S. Soccer’s Director of Talent Identification, Tony Lepore, and his staff, youth national team coaches, as well as an assortment of college coaches. Additionally, more than a dozen MLS NEXT Match Evaluators – an assembled group of MLS greats, as well as current and former players who evaluate MLS NEXT matches to assess the quality of play and identify top talents – will be on-site in Norco. Included among this group are MLS greats Sean Franklin (LA Galaxy, D.C. United, Vancouver Whitecaps FC), Raymon Gaddis  (Philadelphia Union) and Dasan Robinson(Chicago Fire FC, LA Galaxy). The MLS NEXT Match Evaluator Program debuted at last summer’s MLS NEXT Cup Playoffs and Showcase.

In preparation for the event, MLS NEXT will also feature a week of virtual programming for all players, parents, coaches, and referees, including a kickoff webinar at 8 p.m. ET on Nov. 29. The webinar is designed to provide all parents and players in MLS NEXT perspectives on the state of soccer in North America from leading figures, including current MLS head coaches, general managers, and players

Players participating in the MLS NEXT Fest Showcase are also eligible for selection to the MLS NEXT Fest Best Of matches, which will feature two matches of select players from across MLS NEXT played on Saturday and Sunday nights. The Best Of matches will provide players with additional exposure to the many college, youth national team, and professional coaches and scouts in attendance.

ABOUT MLS NEXT
MLS NEXT is a new paradigm for player development, launched in 2020 to transform youth soccer in North America. Founded on a collaborative approach to governance and a commitment to innovation, MLS NEXT players have access to the highest level of competition, training and personal development opportunities that will prepare them for their futures, both in soccer and in life. Membership for the 2021-22 season includes 133 clubs, 598 teams and over 12,000 players across the U.S. and Canada. Official partners of MLS NEXT include adidas and Carolina Online at the University of South Carolina. For more information about MLS NEXT, visit  www.mlssoccer.com/mlsnext.