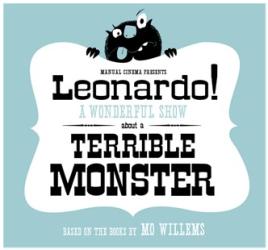 My son was very happy that Leonardo was a nice monster and not scary.  At 4 years old, he did not want to see mean monsters.  Mikey liked watching the play, asked various questions about what was happening during the show, and the show kept him interested the entire performance.  He was glued to the action on stage and on the projector.

I really enjoyed how it was presented.  Viewers got to see the actors behind the scenes, ‘seeing how the play was pulled together.  Viewers had the option to watch the show on a projector for a cartoon like appearance or on the stage.  The stage showed how the faces and voices behind the puppets, the music, the projector, lightening and pictures all came together to create the show.  The presentation was excellent.

The parking lot fills quickly, but we did get a parking spot in the lot.  The facility was clean and the employees were very welcoming.  After the show, actors greeted the audience in the lobby and there were various items to purchase.  My son wanted a Leonardo stuffed animal.  It was reasonably priced at $15. The show was about 50 minutes long.  I would say the ideal age for kids for this show would be ages 5-10, but those younger and older would still enjoy it.  Overall, we had a good time!

Manual Cinema’s production of Leonardo! A Wonderful Show about a Terrible Monster runs through October 6th at Chicago Children’s Theatre, 100 S. Racine, Chicago.  Free parking is available in the lot adjacent to the theater, but it fills quickly.  Running time is about 50 minutes.  Performances are Saturdays and Sundays at 9:30 and 11:30 am.  Tickets start at $35.  FYI www.chicagochildrenstheatre.org.