Lead casting announced for staged concert of Children of Eden 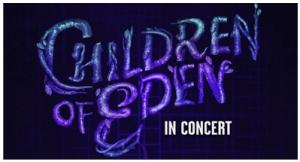 CHILDREN OF EDEN is thrilled to announce award winning gospel artist, DAVID PHELPS, and internet singing sensation, SAM TSUI, will be joining the staged concert presentation of Stephen Schwartz and John Caird's CHILDREN OF EDEN in Chicago this October. The production will play a limited engagement at Broadway In Chicago’s Cadillac Palace Theatre (151 W. Randolph) on October 15, 2022. Additional creatives and casting will be announced at a later date. Ticket information is below.

DAVID PHELPS (Adam/Noah) is credited among today’s most spectacular voices. His seemingly endless vocal range, which extends more than three octaves, coupled with his gift for communicating a song, has brought the house down in the world’s most prestigious venues. For nearly 20 years, David served as a member of the popular and prestigious Gaither Vocal Band, and during that time received numerous Dove Awards, Grammy Awards, and multiple platinum-selling recording projects.—As a solo artist, he received 2009 Dove Award nominations for Male Vocalist of the Year and Long Form Video for the Christmas DVD, O Holy Night to add to his many awards and honors. Since 2012, David has topped the Billboard charts time and time again with releases like: the 2012 live DVD Classic (#1), the 2015 live DVD Freedom (#1), the 2017 live DVD The Best Of David Phelps (#1 topping such popular video releases as The Beatles’ Eight Days A Week), and most recently the 2018 live DVD It Must Be Christmas (#2). The various recordings have been featured on numerous television networks, including the Public Broadcasting System (PBS) and have received acclaim in both secular and gospel music genres. In 2017, David released Hymnal: A Journey Of Faith Through Hymns. Throughout the recording, David lends his artistry to some of the most treasured hymns of the church. The recording showcases masterful vocals and lush arrangements as each song takes the listener on a journey of inspiration and worship in song. The CD is followed by a companion live DVD in 2019. This television release breathes new life into these long-beloved songs and includes 3 exclusive songs not previously released by Phelps.

SAM TSUI (Cain/Japheth) is an independent artist, singer, songwriter and content creator. Sam has been hailed as an internet singing sensation and was among the first musicians to establish a popular music channel on YouTube. Tsui has created and grown a combined social following of over 5 million loyal fans, who call themselves the #Samily. To date, his videos, including covers, medleys, and mashups, and originals have amassed hundreds of millions of views on YouTube alone, with nearly 2 million monthly listeners on Spotify. At the end of 2019 he completed a 10-city tour of Southeast Asia and China, and spent 2020 producing and releasing a full studio album month by month called “Yearbook”. Sam has starred in and created music for campaigns with brands including Coca Cola, McDonalds, Mars, IKEA, and more. Passionate about increasing the visibility of under-represented groups in media (especially pop music), Sam is proud to be an artist who can represent both the Asian-American and LGBTQ communities, and collaborates frequently with his husband Casey Breves.

CHILDREN OF EDEN is a musical freely based on the book of Genesis, with book and score respectively by JOHN CAIRD and STEPHEN SCHWARTZ. Additional creatives and casting will be announced at a later date. The concert presentation will take place ahead of a full-scaled Broadway-aimed production due to mount fall next year. The staged concert presentation will be led by Kyle Hass (Artistic Producer); Derek Van Barham (Director); Nicholas Ranauro (Choreographer); and Justin Kono (Music Director). The event will be produced through a special arrangement between the Chicagoland Theatre Fund and Onesti Entertainment.

For future announcements, all are encouraged to subscribe at www.childrenofedenthemusical.com

TICKET INFORMATION
Individual tickets are now on sale with prices ranging from $45-$95 with a select number of premium seats available for all performances. Current Broadway In Chicago subscribers can add the show to their packages by calling 312-977-1717. Tickets are available now for groups of 10 or more by calling Broadway In Chicago Group Sales at (312) 977-1710 or emailing GroupSales@BroadwayInChicago.com. For more details, visit www.BroadwayInChicago.com.

ABOUT BROADWAY IN CHICAGO
Broadway In Chicago was created in July 2000 and, over the past 22 years, has grown to be one of the largest commercial touring homes in the country. A Nederlander Presentation, Broadway In Chicago, lights up the Chicago Theater District entertaining more than 1.7 million people annually in five theatres. Broadway In Chicago presents a full range of entertainment, including musicals and plays, on the stages of five of the finest theatres in Chicago’s Loop, including the Cadillac Palace Theatre, CIBC Theatre, James M. Nederlander Theatre, and just off the Magnificent Mile, the Broadway Playhouse at Water Tower Place and presenting Broadway shows at the Auditorium Theatre.