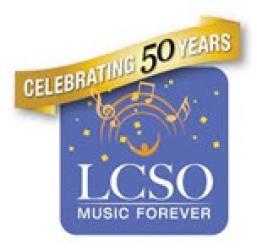 A generous anonymous donor has come forward to offer a 3 to 1 match to enable the La Porte County Symphony Orchestra (LCSO) to reach its $1.5 million goal.

Long-time supporters, past LCSO Board members and Honorary Co-Chairs of the MUSIC FOREVER Campaign, Leigh and Marcia Morris made the announcement at the opening concert of the LCSO’s 50th Anniversary season on Saturday, November 5. Marcia Morris began, “Nearly two years ago, the LCSO Board determined that our 50th anniversary was the perfect time to roll out our first-ever fundraising campaign. After consultants helped us determine that we could raise $1.5 million, we developed the MUSIC FOREVER Campaign and went to work. We are well on our way to making that campaign goal and hope to exceed it.”

﻿Quoting 1920s era star and ‘The World’s Greatest Entertainer’ Al Jolson, Leigh Morris continued, “You ain’t seen nothin’ yet! The first 50 years of the La Porte County Symphony Orchestra have been remarkable. From its inception as a gathering of local musicians who loved music to the great orchestra it is today is clearly a remarkable achievement. But, it’s the next 50 years of the orchestra that Marcia and I are most excited about, and we hope you are, too.”

As a part of the La Porte County Symphony Orchestra’s 50th Anniversary, its Board of Directors embarked on a first-ever fundraising campaign to ensure the financial future of the Orchestra.

Setting a goal of raising $1,500,000 and naming the campaign, MUSIC FOREVER, the Board set forth a vision for long-term sustainability focused on music innovation, new generations education initiatives and endowment building. The effort will conclude on July 31, 2023 marking the end the LCSO’s 50th Anniversary.

The silent phase of the MUSIC FOREVER campaign began in September of 2021 and concluded in October of 2022. With $1,300,000 raised during the silent phase, the LCSO now turns to the public portion of the campaign to raise the additional $200,000 toward the goal. Thanks to this generous match from the anonymous donor, contributions will provide for each year-end annual fund gift to be matched three-fold. The goal is to raise an additional $50,000 which will then be matched with a total of $150,000.

Those interested in supporting the Orchestra through a gift or desiring more information including the LCSO’s case for support are welcomed to call the LCSO at (219) 362-9020 or email Tim King, LCSO Executive Director, at executive@lcso.net.

About LCSO: The mission of the LCSO is to enrich the lives of people of all ages within and beyond La Porte County through the experience of excellent live orchestra performances. The LCSO is also supported by the Indiana Arts Commission, South Shore Arts, What's New La Porte, The Beacher and WIMS AM 1420, 95.1 FM, 106.7 FM, 96.7 The Eagle, Rock 106.5 and Art on the Air WVLP 103.1 Radio. Visit us at: www.lcso.net.