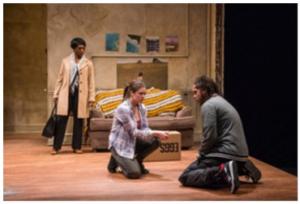 Christine has withheld some other information from her new landlady. First that she has a child and second, that she has a boy friend, although she is not happy with him. Poet ( sharply played by Julian Parker) is a man who has a past that would never fit in , but is on the verge of cleaning up his act and cares a great deal for Christine. He baby-sits her daughter when she works at night, and even though we never meet the little one until the end of the play, we hear of her from start to finish.

These two women, while in different worlds, do share some commonality in dealing with fairness in life and kindness of others. It is a delicate line that they walk, almost a tightrope at times. The apartment that we see at the every start is dingy, has a chunk of floor missing allowing Christine to communicate with her downstairs neighbor. There is no refrigerator, sink or stove in the kitchen, and the sofa and chair left behind are not something one would want to sit in or on.

Yet, these ladies do become sort of “friends” as Marti teaches Christine how to rise above her status and perhaps become a self-made real estate mogul herself. Marti despises Poet and what he stands for. One can see some caring on her part for Christine and her child, but this is not the life she created for herself and so she backs off when she gets too close. After numerous confrontations with Poet and Christine, Marti opts to take the path of eviction and with the stress of this, Christine decides to go to the authorities on the violations in the building. In the final scene of the story, the two ladies talk about the years that have passed since that incident and make us feel better about the relationship that was forged earlier.

The play is 90 minutes with no intermission and works at telling us a story that should cause us to think. To think about the life we are lucky not to have , or have had. I recall my own experience as a young boy when we “broke a lease” and faced eviction. I came home from school with my brothers only to find our “stuff” on the lawn. Our case was different. We had a truck waiting to move it all to our new home, in the suburbs, but most of these situations do not end up that way. Those evicted go to family for assistance or end up homeless. Often through no fault of their own. I did not stay for the discussion, but I suggest you do. I am sure it will be a learning experience.

The technical aspects of the show (Arnel Sanchianco’s set is clever), lighting ( Sarah Hughey) and sound (Stephen Ptacek) along with the costumes ( Christine Pascual) were on target and the direction by Jess McLeod kept the flow of the action moving. A theater full of seniors on a Wednesday afternoon and not a sleeper among them. Great work!

“Landladies” will continue at Northlight Theatre thru April 20th with performances as follows: 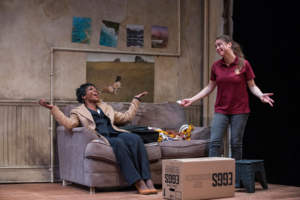