Conducted by IPO Music Director Stilian Kirov, Illinois Philharmonic Orchestra (IPO) lowers the curtain on its 44th season with Scheherazade on Saturday, May 14 at 7:30 pm at the stunning 1,100 seat Ozinga Chapel at Trinity Christian College in Palos Heights. The exhilarating concert features world-renowned pianist Alexander Toradze performing Sergei Prokofiev’s Piano Concerto No. 3, the world premiere of IPO Composer-In-Residence Martha Horst’s Reverberations, and Nikolai Rimsky-Korsakov’s Scheherazade. The evening will be sponsored by the very much still alive Lois & Stanley Birer as a celebratory UNMemorial Concert. Tickets range from $10-67 and are available at ipomusic.org. 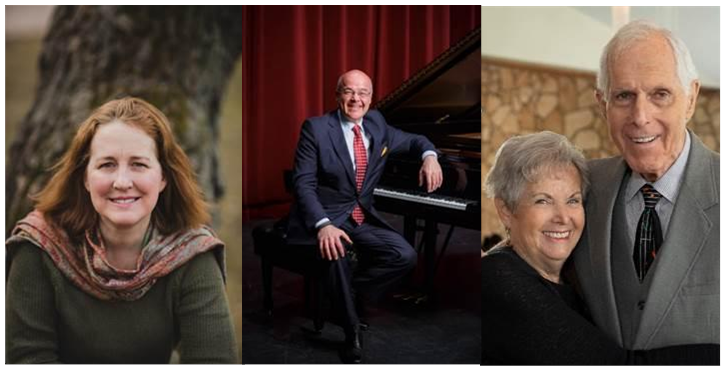 “After a long career punctuated by performing with nearly every major orchestra in the United States, IPO is so very excited to have Georgian pianist Alexander Toradze perform Prokofiev on our stage.” says IPO Executive Director Christina Salerno, who was named 2022 Executive Director of the year by the Illinois Council of Orchestras

“We are all very excited to welcome one of the most distinguished pianists in the world to our stage and to celebrate the end of our season with this beautiful program.” adds IPO Music Director Stilian Kirov. “We are also very happy to finally be able to present Martha Horst’s final piece as our composer in residence. This will be a special evening for the whole IPO family.”

Dr. Martha Horst was the winner of IPO’s 2019 Classical Evolve competition. She began her tenure as IPO Composer-in-Residence during the 2019-20 season. Due to pandemic rescheduling, the final of her three pieces composed for IPO, Reverberations, will have its long-awaited world premiere during the Scheherazade concert.

IPO Classical Evolve is part of Maestro Kirov’s vision to encourage the development of new musical voices. During the annual composition competition, finalists are chosen to have their original score workshopped and performed live to IPO audiences. The winning Composer-in-Residence then composes three works for the orchestra during the forthcoming season. More information can be found at ipomusic.org/classical-evolve-composer-competition.

The final piece on the program is Nikolai Rimsky-Korsakov’s epic orchestral adventure Scheherazade. The work is based on the collection of Middle Eastern folktales One Thousand and One Nights, or – as it’s more commonly known in English- Arabian Nights.  The evocative symphonic journey comes in four vividly titled movements, I. The Sea and Sinbad’s Ship, II. The Kalendar Prince, III. The Young Prince and the Young Princess, and IV. Festival at Baghdad; the Sea; the Ship Goes to Pieces on a Rock Surmounted by a Bronze Warrior.

The concert will be celebrated as the Lois & Stanley Birer UNMemorial Concert. Marking a first in IPO history, and possibly in the history of any orchestra, the Birers’ will sponsor the UNMemorial Concert as a celebration of life to be enjoyed with their friends and the orchestra they love- while they are still alive. Lois & Stanley Birer are both longtime IPO supporters and each hold the title of IPO Life Director.

“When we go to a funeral and see all the flowers, we wonder how much the deceased would have loved to see and smell the flowers.” Says Stanley Birer, “Then a great inspiration came to us. Why not donate a performance of the Illinois Philharmonic Orchestra before we died and be able to enjoy the pleasure of listening to our orchestra? Yes, we have named the IPO in our wills, but we are sure that we will enjoy this concert more than the next one.”

Universally recognized as a masterful virtuoso in the grand Romantic tradition, Alexander Toradze has enriched the Great Russian pianistic heritage with his own unorthodox interpretative conceptions, deeply poetic lyricism, and intensely emotional excitement.

Toradze’s recording of Prokofiev’s Piano Concert No. 3 was named by International Piano Quarterly as “historically the best on record.” Other highly successful recordings include Scriabin’s Prometheus: The Poem of Fire, with the Kirov Orchestra, Valery Gergiev conducting as well as recital albums of the works of Mussorgsky, Stravinsky, Ravel and Prokofiev for the Angel/EMI label. The recording of both Shostakovich Piano concerti with the Frankfurt Radio Symphony Orchestra under Paavo Järvi has been considered by the Frankfurter Allgemeine as an historical achievement of the artist’s career.

Born in Tbilisi, Georgia, Alexander Toradze graduated from the Tchaikovsky Conservatory in Moscow and soon became a professor there. In 1983, he moved permanently to the United States and in 1991 was appointed as the Martin endowed Professor of Piano at the Indiana University South Bend, where he created a teaching environment unparalleled in its unique concept. The members of the multi-national Toradze Piano Studio have developed into a worldwide touring ensemble that has performed projects detailing the piano and chamber works of Rachmaninoff, Prokofiev, Dvorak, Stravinsky and Shostakovich in Europe (UK, Italy, Germany, Portugal, France) and in the United States. In 2012 the Toradze Piano Studio realized a revolutionary Radio program by Joseph Horowitz in collaboration with the network WFMT dedicated to Stravinsky and Rachmaninoff: “Russian Accents.”

Martha Horst is a composer who has devoted herself to the performance, creation, and instruction of classical music. Her music has been played by performers and groups such as the Fromm Players, CUBE, Earplay, Alea III, Empyrean Ensemble, Susan Narucki, Left Coast Ensemble, Dal Niente, The Women's Philharmonic, Composers, Inc., members of the Scottish Chamber Orchestra, Eric Mandat, and Amy Briggs. Horst has won a variety of awards including the Copland Award, the Alea III International Composition Competition for her work Threads, and the Rebecca Clarke International Composition Competition for her work Cloister Songs, based on 18th century utopian poetry. She has held fellowships at the MacDowell Colony, Atlantic Center for the Arts, Wellesley Conference, Norfolk Chamber Music Festival and Dartington International School in the UK. Her work Piano Sonata No. 1, recorded by acclaimed pianist Lara Downes, was released nationally by Crossover Media.

About The Illinois Philharmonic Orchestra

Named “Illinois Professional Orchestra of the Year” for the third time in 2020 by the Illinois Council of Orchestras, Illinois Philharmonic Orchestra celebrates its 44th Season in 2021-2022. From its community orchestra roots in Park Forest, the 69-member orchestra has grown into a critically acclaimed professional regional orchestra. Under the leadership of Music Director Stilian Kirov and Executive Director Christina Salerno (named 2022 Executive Director of the year by the Illinois Council of Orchestras) the mission of IPO is to provide concerts of compelling professional symphonic music, support music education, and expand audience awareness of musical excellence for the diverse communities of the greater Chicago region.