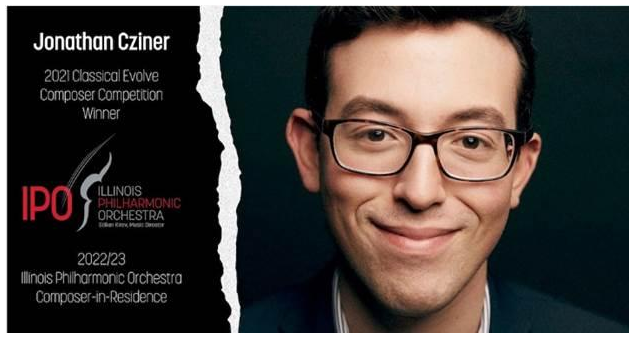 Three national finalists – Cziner (Dallas, Texas), Ryan Lindveit (Ann Arbor, Michigan) and Robert Rankin (Bloomington, Illinois) – converged on Trinity Christian College in Palos Heights, Illinois on September 22, 2021 to have their original compositions workshopped and performed by IPO musicians in the Marg Kallemeyn Theatre at Trinity Christian College. Following the performances, voting was determined by one collective Audience vote, one collective Musician’s vote, one vote from each of the three jurors and one vote from IPO Music Director Stilian Kirov. Cziner’s Four Lakes – a traditional four-movement piece Cziner describes as a “micro-symphony” – was declared as the winning composition and Cziner was named the next IPO Composer-in-Residence for the 2022/23 season.

“There are so few Composer-in-Residence positions out there and even less that are specifically given to younger/emerging composers,” said Cziner. “IPO has given me an amazing opportunity to build a meaningful, working relationship with this orchestra and a personal relationship with the community that the orchestra serves. I’m so looking forward to getting to know the individual musical personalities of the orchestra during my time as Composer-in-Residence and crafting pieces they are excited about performing! As an aside, I have not really had a chance to explore much of Chicago in my life so I’m excited to experience the city and its neighborhoods.”

“Our goal is to provide young American composers with opportunities to create, grow and learn while being part of a vibrant professional organization,” says Kirov. “As IPO’s Composer-in-Residence for one year, having their original works performed by IPO on a regular basis, along with experimenting and interacting with our outstanding musicians, should offer extremely valuable experience that will hopefully give these composers the tools to lead American classical music into a very bright, exciting future!”

IPO’s Classical Evolve composer competition is open to all US citizens or permanent residents who have had no more than two original compositions performed by a professional orchestra in their career. The Finals for the pandemic-interrupted competition were originally slated to take place in May of 2020.

Previous winners include Ben Ash and Martha Horst. Horst’s original composition Reverberations will be performed by the Illinois Philharmonic Orchestra at their concert on May 14, 2022.

ABOUT THE ILLINOIS PHILHARMONIC ORCHESTRA

IPO celebrates its 44th season in 2021/22. Under the leadership of Music Director Stilian Kirov and Executive Director Christina Salerno, the mission of IPO is to provide compelling professional symphonic music, support music education, and expand audience awareness of musical excellence for the diverse communities of the greater Chicago region.