Before it became an award-winning, hit comedy series on Netflix, the playful, sweet, and hilarious Kim’s Convenience was a smash on stage. At Mr. Kim’s corner variety store, the only thing that isn’t for sale is his family legacy—but with big-dollar projects moving in, does everyone have their price? 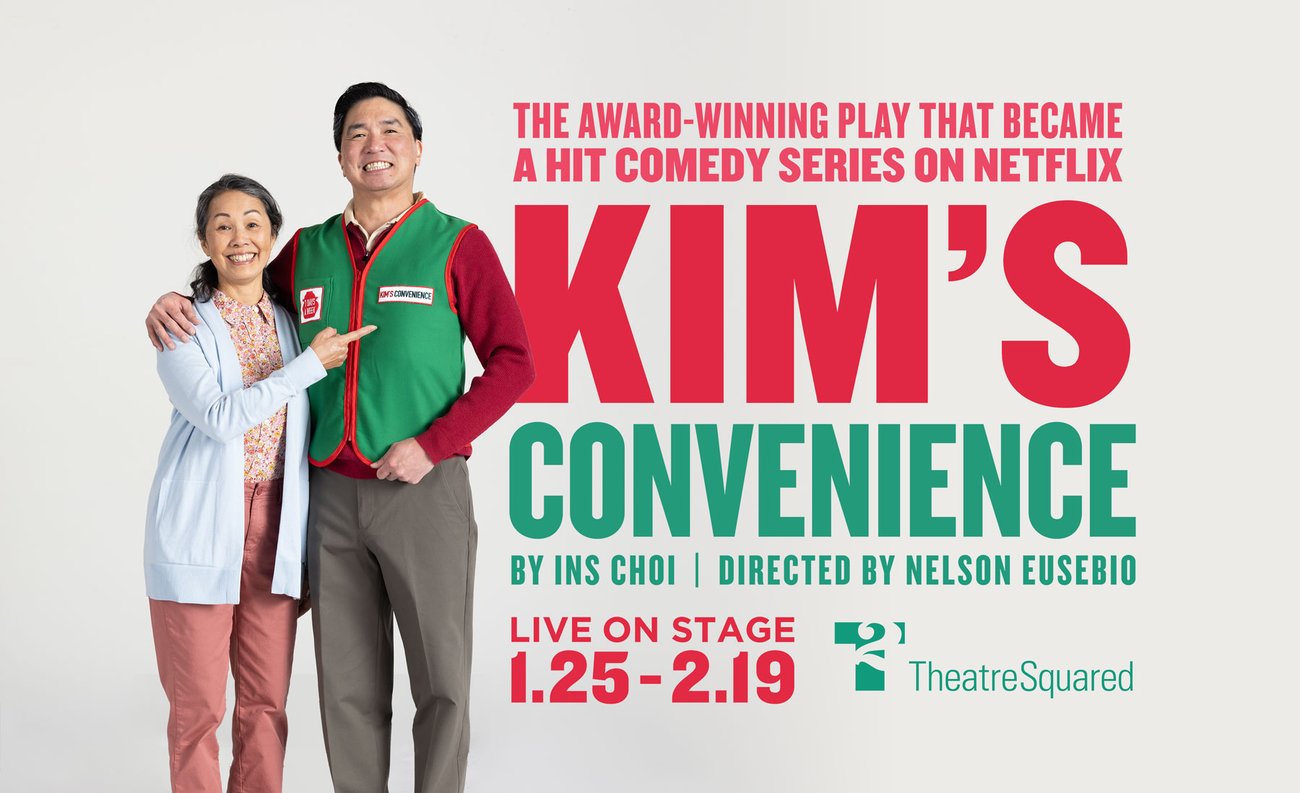 Choi’s play was first produced at the Toronto Fringe Festival in 2011 to sold-out audiences. In 2012, it was remounted at Soulpepper Theatre Company, Toronto’s largest theatre. It became the biggest commercial success in the company’s history and won several Toronto Theatre Critics Awards.

The Toronto Star’s critic wrote: “It’s the kind of show that restores one’s faith in the theatre. There are many reasons to cheer—join the celebration!”

“Kim’s Convenience is a story that resonates with my own experience as a first generation Asian American,” says Director Nelson Eusebio. “As the son of immigrants, this story feels like my own family. I think T2’s audiences will laugh and love this Korean-Canadian family comedy. It’s a little more grounded and realistic than the Netflix show, and the humanity comes shining through Ins Choi’s smart dialogue and sensitive portrait of a family in crisis. All of this drama arrives in a fast paced, comedic vehicle that busts conventions.”

“What a lovely way to ring in the New Year at TheatreSquared,” said T2 Artistic Director Robert Ford. “Rich and resonant with timely themes, it’s also just a joy to watch. There’s a reason this play was turned into a hit TV show. Within minutes of the lights coming up, you’re laughing, feeling, and anticipating, all at once.”

“I would love for audiences to fall in love with the Kim family, have a few laughs, and learn more about the immigrant experience,” he says.

Performances of Kim’s Convenience are scheduled from January 25 until February 19, with 7:30pm performances Tuesday through Saturday and 2pm matinees on Saturday and Sunday. The play is in the West Theatre at TheatreSquared, 477 W. Spring Street in downtown Fayetteville, Arkansas. Tickets range from $20-$54. All fees are included, with no additional charges at checkout.

Subscription packages for TheatreSquared include full five-play packages starting at $125, with four play flex packages starting at $89. Benefits for season ticket holders include savings of up to 20% on every show, free unlimited exchanges, discounted reserved parking, and same-day discounts in The Commons Bar/Café and other T2 Restaurant & Hotel Partners.

Through T2’s Lights Up! For Access program, with lead support from the Walmart Foundation and the Willard and Pat Walker Charitable Foundation, SNAP benefit recipients can purchase $1 tickets, while students and patrons under the age of 30 can purchase $10 tickets. Fully subsidized, free tickets are also available for clients of a number of local community service organizations. For more information, visit www.theatre2.org/lights-up.

Subscription packages and single tickets can be reserved by calling TheatreSquared at (479) 777-7477 or by visiting www.theatre2.org.

TheatreSquared’s signature offering of bold new plays in an intimate setting has driven its growth to become the state’s largest theatre, welcoming more than 80,000 community members to 350 performances and events each year. The company offers a unique audience experience of immersive, professional productions in an intimate setting. Its work has been recognized with critical acclaim by The New York Times, The New Yorker, The Wall Street Journal, NPR’s All Things Considered, and the American Theater Wing, founder of the Tony Awards. The playwright-led company is one of mid-America’s leading laboratories for new work, having launched more than 70 new plays. Notable collaborators have includedBryna Turner, Candrice Jones, José Cruz Gonzáles, Sarah Gancher, The Kilbanes, Mary Kathryn Nagle, Anne García-Romero, Rachel Lynett, Tony Meneses, Lisa D’Amour, Qui Nguyen, Mona Mansour, Karen Zacarías, and many others. TheatreSquared’s remarkable expansion—with a twentyfold increase in audience in just the past decade—parallels the emergence of its home region in the northwest corner of Arkansas as a booming population center and destination for American art. Offering far-reaching access and education programs and an open-all-day gathering space, The Commons Bar/Café, TheatreSquared remains rooted in its founding vision, that “theatre—done well and with passion—can transform lives and communities.”