“Grace, or The Art of Climbing” - Review by Alan Bresloff 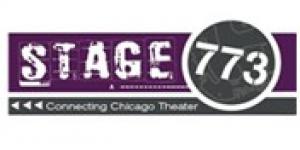 For 90 minutes, under the direction of Erin Shea Brady on a set designed by Evan Frank, we experience some of Emm’s deepest thoughts as we join her through her troubles and training. For 20 weeks, we follow along as we are advised which week we are at. We are told that she has loved and lost, but I for one did not see the hurt that would have made me care for her.  Greg Mills does a great job as her father, but is limited by the material written to tell the story. The highlights of the production are Joshua Zambrano as her coach Sims and Elissa Newcorn as her best friend Dell. At one time, I did get a bit confused as Newcorn played another role. She did change her demeanor and voice, but the lady next to me seemed confused.

The ensemble members that complete the cast are Graham Carlson, James Lewis and Lynette Li. All three of these are mentioned in the program as specific characters, but seem to take on additional roles as well. I understand the company keeping their costs down, but if you confuse the audience, the odds of them “spreading the word” become less advantageous to the future of the company. This is the Midwest premiere, so the play has been done in other areas. Perhaps it just needs a bit of tightening in order to truly deliver the power that one might be able to get from one letting the defeats of their past just lay there and to proceed to accept the challenge placed before you. To reach the impossible dream ( as we know from “The Man of La Mancha”). 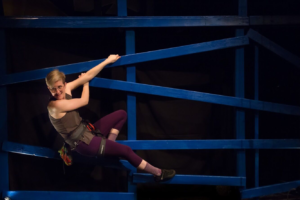 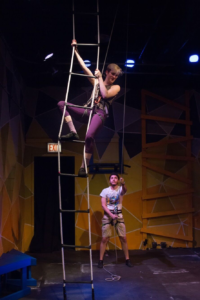 Even the title is somewhat confusing. I was expecting our main character to be named Grace. not EMM. It seems as though Feldman uses Grace to represent the “style” of being human. The journey is somewhat rocky as we watch a talented cast attempt to bring us a story that could be one of great power in overcoming the situations that have caused her depression to go onward ( and upward) to reach her goals.

“Grace, or The Art of Climbing” is playing at Stage 77 in the “box” theater located at 1225 West Belmont. The theater is a steep one , seating-wise and there are some scenes that become lost to those sitting in the fourth row and up. The

view from these seats is blocked by those sitting in the first four rows. The director should think about every seat in the house, for sight lines and for hearing. Today’s actors often speak to the first few rows instead of te last row ( as I was trained in my days). The experience of the audience members is important, so think about that. The fight choreography (Allison Dornheggen) and the climbing consultant (Jonathan Wilson) were very instrumental in bringing some realism to the production. Blake Cordell handled the sound and Liz Cooper the lighting.

“Grace, or The Art of Climbing” will continue thru July 7th with performances as follows: 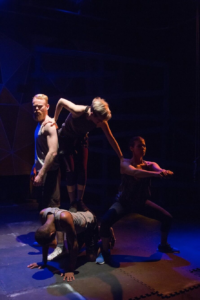