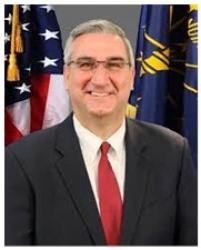 “Today, I proudly signed Senate Enrolled Act 2 to return $1 billion back to Hoosier taxpayers. This fulfills what I set out to accomplish when calling the General Assembly into special session in order help Hoosiers hurting from historically high inflation. I am also especially grateful for the nearly $100 million in long overdue increased funding to support the health of our Hoosier mothers and babies. While there is still more to do, better access and awareness of all our programs will be critical to improving our infant and maternal mortality rates – a long-standing priority of my administration.

“The exemplary teamwork and seriousness of purpose put into each element of SEA 2 is a testament to the elected leaders who helped shape it. I would like to thank Senator Travis Holdman, Chairman Doc Brown, and Representative Sharon Negele and the many other members from both sides of the aisle who contributed to the strength of the final product.

“The effort to provide the programmatic supports and the billion dollars of inflation relief contained in SEA 2 is all the more remarkable as it was crafted amidst the thorough and thoughtful debate on Senate Enrolled Act 1, which I also signed today.

“Following the overturning of Roe, I stated clearly that I would be willing to support legislation that made progress in protecting life. In my view, SEA 1 accomplishes this goal following its passage in both chambers of the Indiana General Assembly with a solid majority of support. These actions followed long days of hearings filled with sobering and personal testimony from citizens and elected representatives on this emotional and complex topic. Ultimately, those voices shaped and informed the final contents of the legislation and its carefully negotiated exceptions to address some of the unthinkable circumstances a woman or unborn child might face.

“Thank you Senator Sue Glick and Representative Wendy McNamara for your brave authorship of SEA 1. Each of you demonstrated a steady hand and uncanny poise while carrying this once-in-a-generation legislation.

“Overall, I would be remiss if I did not share a special thanks to my friends House Speaker Todd Huston and Senate President Pro Tem Rod Bray for their partnership, strength and resolve during the lead up and all the way through this special session. You each displayed the best Indiana has to offer in steering your respective chambers through unprecedented waters and delivering on your promises to conduct a respectful and thorough process.

“Lastly, to the people of Indiana, let me assure you that the democratic process marches on, and you should continue to reach out to all your elected representatives to have your voice heard. Looking back, I am personally most proud of each Hoosier who came forward to courageously share their views in a debate that is unlikely to cease any time soon. For my part as your governor, I will continue to keep an open ear.”