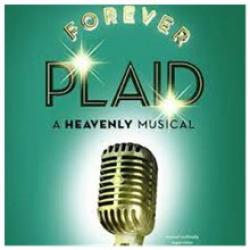 **** Recommended **** Drury Lane Theatre is back after 370-some days!  Starting out small and musical seems to be a theme this fall in suburbia; Drury Lane’s season opener, a slightly shortened, one-act version of Forever Plaid fits right in.  Forever Plaid is a musical revue about a quirky quartet of good-looking guys who sing a slew of golden oldies in harmonies straight out of the ‘50s.  It’s a sweet, funny, feel-good treat for everyone in the family.  Get your tickets today!  4 Spotlights

The Plaids were rehearsing their final number as they drove to their very first paying gig when their car was broadsided by a bus.  To add insult to injury, the bus was full of Catholic schoolgirls on their way to see the Beatles on the Ed Sullivan Show.  The girls were all OK, the Plaids were not.

57 years later, the Plaids, Sparky (Bryan Eng). Francis (Michael Ferraro), Jinx (Yando Lopez) and Smudge (A.D. Weaver) are bewildered to find themselves on a stage, a stage with microphones and an audience, but they don’t know why they’re there, because, of course, they're dead.

By the way, when the Plaids sang, they imitated famous ‘guy’ groups of the ‘50s like the Four Aces, the Four Lads, the Four Freshmen, the Crew Cuts and more. Their first song, Three Coins in the Fountain was sung by Frank Sinatra in the film of the same name, then recorded by the Four Aces.

So, they don’t know why they’re on this stage, they’re very nervous and they’re arguing – staying vs going back to wherever they were, when a couple of helpful thunder claps encourage them to sing their concert.  Noticing they have musicians, they introduce Chuck Webb (Drums) and Jim Widlowski (Bass) as cousins.  They think Valerie Maze, the person on the Keyboard might have come with the venue.

Forever Plaid includes ‘50s hits like Moments to Remember, No Not Much, Perfidia, Catch a Falling Star and Lady of Spain.  Donning plaid sashes, they even pay tribute to Scotland with Scotland the Brave.  They end on a triumphant note with their formerly ill-fated finale, Love is a Many Splendored Thing.

Kudos to Director Choreographer Paul Stancato for finding a way to make Forever Plaid seem fresh and new.  I thought Kristen Martino’s set, which included just enough plaid and neon. fit the 50s vibe perfectly.  The lighting, designed by Leo Fiskness, changed slightly with every song.  Using the strobe lights with an accompanying thunder clap was a cool way to indicate a higher power as did the theatrical smoke and yellowish lighting at the rear of the stage ‘delivering’ stuff.