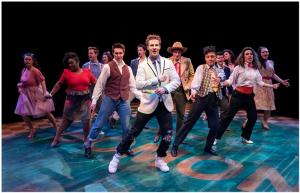 When Ren McCormack (Aidan Wharton) moves from Chicago to a conservative small town, he’s almost immediately labeled as a punk by the adults in town, when he runs up against some quirky rules, especially the one banning dancing.  Righteous Reverend Shaw Moore (Jim Stanek), minister at the town’s only church, led his congregation and the community in a crusade against the sins of rock n’ roll.

Although he tries, Ren never quite fits in, until he meets Willard Hewitt (Ben Barker), who explains the rules.  Of course, the Reverend’s rebellious daughter, Ariel (Lucy Godinez), mostly ignores the rules, and takes huge risks.  She’s dating a garage mechanic and high-school dropout who’s been labeled ‘trailer trash’ by the town.  Her best gal pal, Rusty (Monica Ramirez), has a crush on Willard.

Ren and the senior class all appear in front of the Town Council where Ren makes a speech, even quoting the Bible verses which mention dancing, trying get the ban on dancing lifted and fails.  Later, at the Reverend’s house, Ren gets him to admit that the vote was pre-determined.

Eventually, Ren and the Reverend share a moment; and they all dance happily ever after! Gotta love songs like “Let’s Hear It for the Boy” and “Almost Paradise.”