The Den Theatre is pleased to announce best-selling author and comedian Sarah Cooper, who became an online sensation with her viral lip-sync impressions of former President Donald Trump. Cooper brings her stand-up tour to The Den’s Heath Mainstage (1331 N. Milwaukee Ave., Chicago) for four performances November 12 – 13, 2021 Tickets are currently available at thedentheatre.com or by calling (773) 697-3830. Regular, mezzanine and VIP table seating is available. Drink service is provided for all seats (two drink minimum).

Please note: The Den requires proof of vaccination for all guests, staff and performers and adheres to all CDC, state and local safety guidelines. Additionally, masking is required for all guests during performances. For the most current information on The Den’s COVID guidelines, visit thedentheatre.com/covid19-policy. 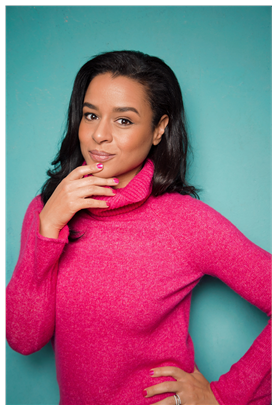 In April 2020, Sarah went viral with her brilliant satirical lip-sync impressions of the former president. She has been retweeted and praised by the likes of Lin-Manuel Miranda, Ben Stiller, Halle Berry, Chrissy Teigen, Jane Lynch, Jerry Seinfeld, Seth Meyers and Bette Midler, amongst others. These “how to” videos have been seen by tens of millions of people including her "How to Medical" video which has been viewed over 25 million times and counting.

Sarah’s first variety special Sarah Cooper: Everything’s Fine, directed by Natasha Lyonne and executive produced by Maya Rudolph, premiered on Netflix October 27, 2020 to rave reviews and featured a number of high-profile celebrity cameos. She is currently writing a new show for CBS adapted from her best-selling book “How To Be Successful Without Hurting Men’s Feelings.” Sarah was named one of Variety Magazine’s “10 Comics To Watch For 2020” and Vulture Magazine’s “The Comedians You Should and Will Know in 2020” and guest hosted Jimmy Kimmel Live in August 2020.

Prior to her online success, Sarah also wrote the best-selling book “100 Tricks to Appear Smart in Meetings”. Sarah is next set to pen an auto-biographical take of Dale Carnegie’s “How to Win Friends and Influence People” for Audible.

Artistic Director Ryan Martin opened The Den in 2010 in the Wicker Park neighborhood with a single theatre space. Now celebrating its tenth year, The Den is a multi-level live entertainment venue that boasts five intimate and unique theaters ranging from 50 – 300 seats. The first floor houses The Den’s Haven Lounge – a full-service coffee shop and bar where neighbors, audiences and like-minded culture hounds gather to drink, eat, talk, read, watch, think, listen and live. Currently, The Den is home to five resident theatre companies including Broken Nose Theatre, ComedySportz Chicago, First Floor Theater, Haven and The New Coordinates (formerly The New Colony). Hundreds of other companies and artists from Chicago and beyond have called The Den home – from national names to local stars, The Den consistently plays host to a lineup of exciting and diverse talent. As a building created for interdisciplinary arts, The Den has accommodated a wide variety of programming, including plays, musicals, film screenings, live music, dance, improv and stand-up comedy, seminars and speaking engagements. For additional information, visit thedentheatre.com.