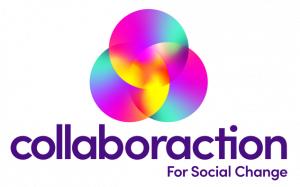 Collaboraction announces the line-up, dates and locations for its 6th Peacebook Festival, Saturday, September 25 at Kennedy-King College in Englewood, and Saturday, October 2 at the Kehrein Center for the Arts in Austin.

Each Peacebook event will present a selection of world premiere Gifts of Peace Solos created and performed live and in-person by a diverse line-up of leading Chicago peace visionaries.

A collection of short films all produced by Collaboraction since the beginning of the Covid-19 pandemic precedes the solo works each night.

Both evenings conclude with a Crucial Conservation between the artists and audience about how to increase the peace in Chicago.

“This unique moment in history is an open door to new ideas and actions around cultivating peace in Chicago and we are honored to be able to share these gifts of critical voices and perspectives on Peace,” said Collaboraction Artistic Director Anthony Moseley.

Tickets, $5-$35, are on sale now. Go to collaboraction.org for tickets, the full line-up, artist bios, show descriptions and artist information.

Note: Masks will be required at all times, and proof of vaccination is required. Or, in order to not limit access to the great majority of these communities based on their vaccination hesitancy, a negative Covid PCR test within 48 hours of performance time, or a negative six-hour hour rapid antigen test, will also be accepted. Visit collaboraction.org for updates to Collaboraction's Covid policies.﻿

Oh, Colonizers is a Masterpiece Theatre styled satire hosted by self-proclaimed Cultural Historian of Black Joy Carla Stillwell. Oh, Colonizers unpacks the way white people throughout America’s history have spread "oppression mayonnaise" over countless Black and Brown people. In this episode, we look at the period after the Civil War when America had a choice between emancipation, reconciliation and capitalism. With the help of a metaphorical World Colonization game show and KAREN inspired commercials, Oh,Colonizers connects the dots between capitalism and the insurrection of January 6, 2021 with historical accuracy and enough comedy to help the medicine go down.

(from left) Chellee Rashad of Imagine Englewood If and Pha’tal, Think Outside the Block

Five Englewood artists and activists – jazz legend Ernest Dawkins, Lyana Funches and Pha’tal of Think Outside the Block, Jasmine Thurmond, Principal, Dr. Martin Luther King, Jr. Academy of Social Justice, Chellee Rashad of Imagine Englewood If, and Joy Smith of Joyful Soundz - get their long overdue close-up in Collaboraction’s new video compilation showcasing the life and vibrancy of Englewood. Funded in part by a grant from the Arts Work Fund.

Ameena Matthews, the legendary peacemaker currently running for U.S. Congress for the 1st District of Illinois, featured in the award-winning documentary film The Interrupters shares her message of peace and hope.﻿

John Johnson, the southside poet, rapper and activist, former Youth Ambassador for Michelle Obama, who appeared on the TV show Rhythm and Flow alongside Chance the Rapper.﻿

Teh’Ray “PHENOM” Hale, Sr., the Chicago poet, spoken word artist, MC, activist, mentor and founder of "EmceeSkool," where he trains young men to become MCs, but also establishing themselves as leaders and ambassadors of peace.

Kehrein Center for the Arts, 5628 W Washington Blvd., in Austin

Oh, Colonizers is a Masterpiece Theatre styled satire hosted by self-proclaimed Cultural Historian of Black Joy Carla Stillwell. Oh, Colonizers unpacks the way white people throughout America’s history have spread "oppression mayonnaise" over countless Black and Brown people. In this episode, we look at the period after the Civil War when America had a choice between emancipation, reconciliation and capitalism. With the help of a metaphorical World Colonization game show and KAREN inspired commercials, Oh, Colonizers connects the dots between capitalism and the insurrection of January 6, 2021 with historical accuracy and enough comedy to help the medicine go down.

Short films from Collaboraction's 2020 Peacebook Fest include (left) Essential?...Tengo que trabajar/I have to work by Jasmin Cardenas and (right) This is North Lawndale by and featuring Willie “Prince Roc” Round.

Abad Viquez, a 19-year-old Senn High School graduate and budding theater actor, born with sacral agenesis, who placed first in the Chicago qualifying rounds of the August Wilson Monologue Competition in 2019 and won third place in the national championship in New York City.

Anthony Wolf grew up on the west side of Chicago and is a dancer, painter and writer whose career has led to him work with Jay Leno, the Chicago Bulls, Puff Daddy, Eve, Oprah Winfrey and many more.﻿

Marvin Tate, a multidisciplinary artist, performer and educator, active in the Chicago music scene since 1993, and collaborator with the likes of Leroy Bach, Theaster Gates Jr. and the Black Monks of Mississippi.﻿

All Gifts of Peace Solos will be captured by a multi-camera live video team directed by award winning filmmaker Marquis Simmons for future release on Collaboraction’s Together Network.

Want to spark social change in Chicago and beyond?

Collaboraction, Chicago’s theater for social change, collaborates with a diverse community of Chicagoans, artists and community activists to create original theatrical and virtual experiences that cultivate dialogue and action around the world’s most critical social issues.

Since the company’s founding in 1996, Collaboraction has pushed artistic boundaries working with more than 4,000 artists to bring over 100 productions and events to more than 150,000 unique audience members, and has inspired measurable positive change on social justice in Chicago and beyond. Collaboraction’s work includes Sketchbook, Peacebook, Crime Scene, Forgotten Future and Gender Breakdown.

Collaboraction has been acknowledged for innovation and inclusivity by using theater as a tool for social change with numerous awards including, most recently, a 2020 Foster Innovation Award from Chicago’s Department of Cultural Affairs and Special Events, the 2020 Multi-Racial Unity Award from the First Unitarian Church-Chicago, a 2018 Stand For the Arts Award from Comcast & OvationTV, and an Otto Award from New York’s Castillo Theatre.

In August 2021, Collaboraction returned to live performances by debuting The Light, a new ensemble of six high-achieving Chicago youth artists and activists who performed at Douglass Park in North Lawndale, LaFollette Park in Austin, and Hamilton Park in Englewood as part of the Chicago Park District’s Night Out in the Parks. Visit collaboraction.org/the-lIght to see where The Light will perform next in 2021-22.

Meanwhile, Collaboraction’s Together Network presents exclusive virtual content like Becoming, a live web show for anyone looking to be active anti-racists (first Tuesday of every month at 6 p.m. CT), and Crucial Connections, a live, interactive talk show that brings social justice warriors, artists and community residents together for crucial conversations (third Thursday of every month, 8 p.m. CT). Learn more at collaboraction.org/together-network.

Collaboraction continues to use the theater at Kennedy-King College in Englewood as its mainstage producing home. Meanwhile, the company has initiated a search for its next home for live performances, community building and video production, exploring Chicago neighborhoods historically overlooked like Englewood, Austin and Lawndale.