Chicago Shakespeare in the Parks celebrates 10th Anniversary with "DREAM: A Community Reimagining of A Midsummer Night's Dream"

Chicago Shakespeare Theater celebrates the 10th Anniversary of Chicago Shakespeare in the Parks with a re-envisioned creative community engagement program. Through a unique collaboration with local artists and arts organizations, Chicago Shakespeare in the Parks will present the free theatrical event DREAM: A Community Reimagining of A Midsummer Night’s Dream created with Cruz Gonzalez-Cadel, Cage Sebastian Pierre, GQ, and Joriah Kwamé, and created and performed with collaborators from six featured partner neighborhoods, including: Me’Lo The Generation Hero and DJ Jeremy Heights from Englewood; Move Me Soul from Austin; Segundo Ruiz Belvis Cultural Center from Hermosa; Yin He Dance from Chinatown; and partners to be announced from Little Village and West Pullman. Artisans from the Fulton Street Collective in West Town are collaborating on the design of the production’s pop-up mobile stage. 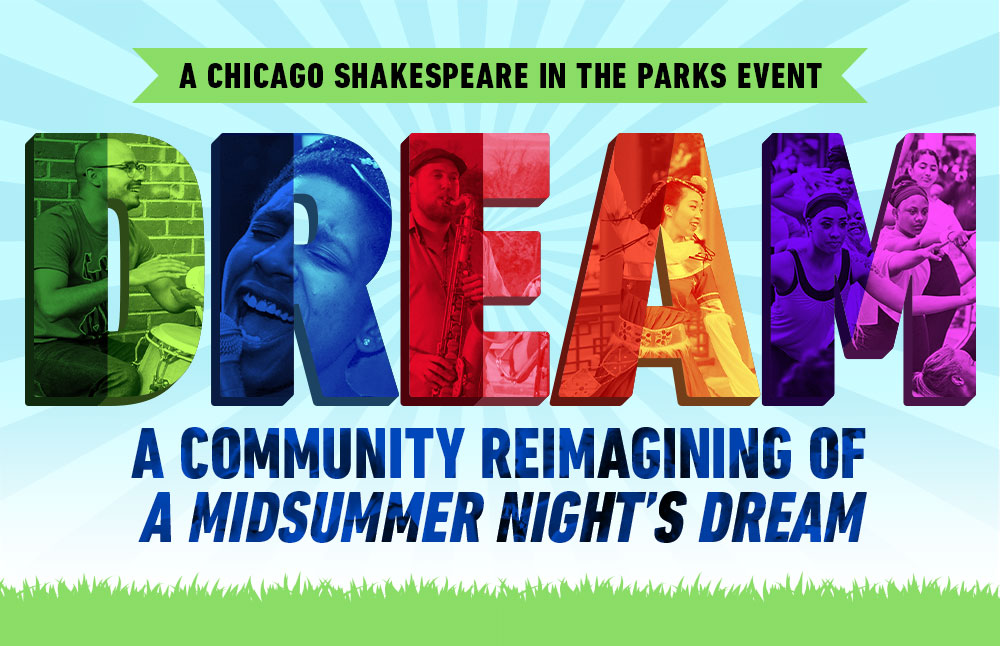 Since its establishment in 2012, Chicago Shakespeare in the Parks has been fueled by the transformative power of neighborhood-based collaborations, reaching more than 175,000 Chicagoans citywide. The program has built a network of connectivity between more than 600 civic, cultural, and corporate partners and thousands of neighborhood artists have shared the stage with Chicago Shakespeare performers.
Building on partnerships that have been forged through the past decade and in direct response to neighborhoods' evolving needs, this new reimagining of the annual summer tradition seeks to expand the program's social impact by deepening relationships with community partners and by approaching the artistic process in a more intentionally participatory, equitable, and inclusive way.

This summer’s creative collaboration will culminate in free performances of DREAM in each of the partner communities:

Inspired by the city’s Together We Heal and INVEST South/West initiatives, Chicago Shakespeare in the Parks also launches the Theater’s new, year-round community connectivity program. In addition to the annual Chicago Shakespeare in the Parks production, the program aims to offer professional development and employment opportunities and to create a community partner cohort, featuring year-long engagements with neighborhood-based arts organizations to mutually offer advocacy initiatives, workshops, classes, and community-building events.

Theater-makers Cruz Gonzalez-Cadel and Cage Sebastian Pierre will guide the collaborative process as creative facilitators. An accomplished actor, singer and dancer, Cruz Gonzalez-Cadel is an ensemble member at Teatro Vista, and has worked with Lookingglass Theatre, Court Theatre, and Chicago Shakespeare—where she most recently performed in audio play productions of Measure for Measure and Twelfth Night. Born and raised in Buenos Aires, Gonzalez-Cadel earned her degree in theater from The Universidad del Salvador and speaks fluent Spanish, English, and French. She has been featured as one of the Chicago Tribune's "10 Hot New Faces of Chicago Theatre" and won a Jeff Award for her portrayal of Lela in Streep Theatre’s wildly successful Lela & Co. Cage Sebastian Pierre is an actor, teaching artist, and fight choreographer who has worked with American Players Theatre, Timeline Theatre, and Chicago Shakespeare, appearing in Romeo and Juliet, Macbeth, and the Chicago Shakespeare in the Parks production of A Midsummer Night’s Dream. He has played a central artistic role in the Theater’s education programming as a Creative Lead for Chicago Shakespeare SLAM, which annually brings together 300 high school students from across the region to explore the work of Shakespeare through their own creative voices.

In a joint statement, Gonzalez-Cadel and Pierre shared, "Our roles feature the word ‘facilitator’ because we are here to support a new way of intentional collaboration—one where the artistic process is not imposed but discovered, creating space to learn from one another. This exchange of knowledge and spirit will be the foundation of our work, guiding us towards a model of creation that celebrates people and the rich legacies we bring into the space by asking, ‘What are your classics?’"

Collaborating on the script is Chicago’s own GQ—best known as the founder and creative director of the Q Brothers Collective. In addition to being fixtures at Lollapalooza and Austin City Limits, their award-winning commissions with Chicago Shakespeare include Othello: The Remix, which premiered at Shakespeare’s Globe and toured to sold-out houses around the world—and Funk It Up About Nothin’, recipient of the Dress Circle Award for Best Musical Production at the Edinburgh Festival Fringe.

Composing original music for DREAM is Joriah Kwamé. A composer, producer and performer, Kwamé is recognized as a fresh new voice for American musical theater. In 2019, he won the Write Out Loud competition presented by Taylor Louderman with his viral hit song "Little Miss Perfect," which he is adapting into a full-length musical with book by Lauren Gunderson. This spring, Kwamé worked with Chicago Shakespeare to create original music for the audio play production of Twelfth Night and served as the composer and lead soloist for the musical finale "Shine So Bright" in the Theater’s virtual To Be: 4/23 event.

Based in Englewood, Me’Lo The Generation Hero is a hip hop peace ambassador and entrepreneur, trained to facilitate safe space events and peace circles to disrupt cycles of violence. Her inspirational and upbeat musical stylings defy genre, bridging Rock, Punk, Neo Soul, Indie, Jazz, Hip Hop and other forms. She was connected to the program by longtime Chicago Shakespeare in the Parks partner R.A.G.E. (the Resident Association of Greater Englewood), a grassroots organization that strategizes with residents and local businesses to address community concerns and create tangible solutions.

Also hailing from Englewood is DJ Jeremy Heights, an artist defining his own signature style through Hip Hop, R&B and Pop. He is the founder and CEO of New Heights Music, which created the Color the World Project to share free music tracks with the community. He recently launched the "Nights with Jeremy Heights" podcast to dive into his own upbringing on the South Side and explore the role of art as means for expression and creative healing.

Austin-based modern dance ensemble Move Me Soul fuses technique, performance and character development—empowering artists to "move" their limits on and off stage. Through programs including a teen ensemble, professional dance troupe and its "Commundance" community engagement initiative, the company works primarily in modern dance styles to explore the Black experience on Chicago’s West Side.

The longest-standing Latino cultural center in Chicago, Segundo Ruiz Belvis Cultural Center (SRBCC) has been committed to preserving and promoting Afro-Puerto Rican and Afro-Latino cultural traditions for 50 years. Based in Hermosa, the center offers multi-disciplinary programs that highlight the presence of African cultures in Puerto Rico and Latin America through dance, music, theater, and visual arts.

Rooted in Chicago’s Chinese American community and the historic Chinatown neighborhood, Yin He Dance bridges east and west, past and present via repertory works passed down by master teachers, as well as new creations, especially those by members of the Chinese diaspora. The company aims to build new avenues of cultural dialogue and share the joy of dance with all communities.

Collaborating on the design for the production’s mobile stage is the Fulton Street Collective—a community incubator and a home base for artists. Its West Town hub features an exhibition and events space, as well as 28 private artist studios. Collective members work in a variety of disciplines including painting, sculpture, mixed media, photography, digital media, dance, and fashion design. The organization strives to help artists develop their skills and their networks so they can grow and enhance themselves and the community.

Additional neighborhood arts partners from Little Village and West Pullman, as well as full casting, to be announced.

Chicago Shakespeare in the Parks is a cornerstone of the city’s Night Out in the Parks initiative, which since its inception in 2013 has provided thousands of hours of safe, diverse, and unique arts programming for artists and audiences to connect in Chicago Park District parks citywide. With support from the Chicago Department of Cultural Affairs and Special Events (DCASE), the program produces free cultural events across disciplines in all 77 community areas of Chicago.

"We are proud to partner with Chicago Shakespeare in the tenth year of Chicago Shakespeare in the Parks," said Chicago Park District Superintendent and CEO Michael P. Kelly. "Night Out in the Parks aims to ensure that every Chicagoan has the opportunity to experience cultural events and celebrate local artists in their neighborhood parks—and this year’s collaboration with DREAM exemplifies the very best of that initiative."

"The Chicago Shakespeare in the Parks program is a unique example of how city agencies, community-based organizations, local artists and neighborhood residents can come together to build meaningful connections through the arts," said Michael J. Cassel, Senior Director, Boeing Global Engagement. "Boeing is proud of our longstanding partnership with Chicago Shakespeare in the Parks, and we are committed to continuing our support of this great organization as we work together to bring equitable access to the arts, professional development and job opportunities to Chicagoans."

David Casper, U.S. CEO, BMO Financial Group said, "BMO Harris is proud to be a Lead Community Partner in support of Chicago Shakespeare’s transformative new connectivity program. The evolution of Chicago Shakespeare in the Parks in its 10th year will serve as a model for intentionally and authentically engaging with Chicago communities as the city reopens and rebuilds.

In partnership with the Chicago Park District, Chicago Shakespeare in the Parks will offer accessible performances to welcome the broadest possible audience. American Sign Language (ASL) interpreted performances of DREAM will take place: August 28 in Hermosa, September 2 in West Pullman, and September 4 in Chinatown. Sign-interpreting the performances are Elizabeth Bartlow Breslin and Will Lee. Chicago Shakespeare in the Parks will also offer an audio-described performance on August 31 in Little Village for audience members who are blind or have low vision, in which a describer provides a description of visual elements of the production transmitted through headphones. Jason Harrington is set to provide audio description. Assistive-listening devices (ALDs) are available for all performances.

More information about this summer’s program at www.chicagoshakes.com/parks.

ABOUT CHICAGO SHAKESPEARE THEATER
A Regional Tony Award recipient, Chicago Shakespeare Theater produces a year-round season—featuring plays, musicals, world premieres, family productions, and theatrical presentations from around the globe—alongside nationally recognized education programming serving tens of thousands of students, teachers, and lifelong learners each year. Its free Chicago Shakespeare in the Parks program has fostered creative community engagement with artists and neighbors across the city for more than a decade. Founded in 1986, the Theater’s onstage work has expanded to as many as twenty productions and 650 performances annually. Dedicated to welcoming the next generation of theatergoers, one in four audience members is under the age of eighteen. On the Theater’s three stages at its home on Navy Pier, in classrooms and neighborhoods across the city, and in venues around the world, Chicago Shakespeare is a multifaceted cultural hub—inviting audiences, artists, and community members to share powerful stories that connect us. www.chicagoshakes.com

ABOUT NIGHT OUT IN THE PARKS
Chicago Shakespeare in the Parks is presented as part of the Chicago Park District’s Night Out in the Parks series, supported by the Mayor’s Office and Chicago Department of Cultural Affairs and Special Events. Now in its 9th year, the 2021 Night Out in the Parks program presents cultural events year-round in neighborhood parks throughout the city. The Chicago Park District in partnership with over 100 local artists and organizations, present engaging events and performances that enhance quality of life across Chicago and amplify the artistic and cultural vibrancy in every neighborhood. Through multiple disciplines, which include theater, music, movies, dance, site-specific work, nature programs, and community festivals, the series aims to support Chicago-based artists, facilitate community-based partnerships and programs, cultivate civic engagement, and ensure equity in access to the arts for all Chicagoans. To further extend the reach of these cultural, arts and nature experiences, the Chicago Park District has mounted a virtual platform to spotlight the diversity of Chicago’s artistic offerings and provide equitable access to some of these performances for all Chicagoans and visitors alike. www.nightoutintheparks.com