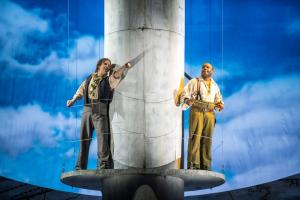 Most people familiar with "Moby-Dick" know that it concerns Captain Ahab (tenor Richard Cox), who is ruthlessly guiding his ship, The Pequod, on a vengeful mission to capture and kill the great white whale which claimed his left leg several years in the past. But at its core, the grandly emotional heart of this opera -- supported by Heggie's lush and heartbreakingly devastating orchestrations and Scheer's crystalline prose -- is the relationship between Greenhorn (tenor Andrew Bidlack), the frightened novice sailor and Queequeg (bass-baritone Vince Wallace), the veteran South Pacific Islander who must teach him the ropes, literally. Within this adventurous tale beats a cautionary narrative about the bonds of friendship, the challenge of loneliness and how we all must learn to accept and embrace other people of different cultural backgrounds who may speak a different language. In other words, to live as fully-functioning versions of ourselves we must strive to see the humanity in everyone.

To that cause, there is also the rivalry between Ahab and Starbuck (baritone Aleksey Bogdanov). Starbuck longs to return to Nantucket to see his wife and child. As an ever-increasingly incensed Ahab sinks deeper into madness on his eternal quest for redemption, he won't allow the harpooners to catch any other whales until his nemesis has been done away with. Starbuck insists that this is unfair to all of the sailors as they could be capturing plenty of whales to profit from their hard work and Ahab is depriving them of making a living wage. In his most stirring aria, Starbuck comes very close to actually killing Ahab while he is asleep. Most of the comic moments involve Stubb (bass David Govertsen) and the entire crew as they swab the deck of the ship and recall past dalliances with Spanish ladies. Chorus Master AJ Keller has done a spectacular job with a chorus which features more than 30 male voices. They are perhaps most impressive as they sing a hymn from offstage while several sailors trim the blubber from the whale carnage and collect the oil. The sole female voice in this entire opera is that of Pip (soprano Summer Hassan), a very young boy who has come along for the journey of his life.

Stage Director Kristine McIntyre has marvelously shaped this work into a living and breathing organism as massive and impressive as the Atlantic Ocean itself. Ably assisting her is AD and Dance Captain Dylan Evans. Together these two have skillfully created continuous and inventive movement for a cast of over 50 singers. Chicago Opera Theater's Music Director Lidiya Yankovskaya masterfully conducted the 60-member orchestra through Heggie's score that, in its overture almost sounded like what Bernard Herrmann may have composed for a Hitchcock film, moved into some pronounced dissonances in Act Two and overall had some of the spirited romanticism of Verdi.

Scenic Designer Erhard Rom has created a monumental set very much in keeping with the scale of Melville's novel. A large circular disk, painted as a compass, sits elevated about three feet high at center stage. The outer rim of this is a ring which can be moved either clockwise or counter-clockwise to reveal a small staircase that descends to the floor of the stage, the pointed bow of the ship, or the upper and lower berths of the sailor's sleeping quarters. On top of this sits the mast, complete with a masthead, from which Greenhorn and Queequeg are often located keeping watch. A semi-circular wall forms the backdrop, adorned with antique nautical maps. About two-thirds of the distance up this wall are panels that can open to reveal a cyclorama of projected tranquil blue sky and clouds but which also innovatively is used to portray small recovery boats that have sailed from The Pequod or to depict the vast horizon. Lighting Designer David Martin Jacques has fashioned a truly brilliant lighting plan. From the bright blazing sun beating upon the hull at midday to the deep oranges and reds of a sunset out at sea, all of the richly evocative tones are perfectly executed. The flashes of lightning during the electrical storm during Act Two, accompanied by the boom of thunder from the orchestra pit and the dark, ominous night sky were truly impressive.

This Chicago Opera Theater production of "Moby-Dick," which is co-produced by Utah Opera, Pittsburgh Opera, San Jose Opera and Gran Teatre del Liceu is flawless on every level. With all of that pedigree and backed by international elán, it easily has become the most ambitious, technically daring and most impeccable achievement that this company has presented.

"Moby-Dick" will be performed Sunday, April 28 at 3:00 PM at The Harris Theater for Music and Dance, 205 East Randolph Street, Chicago, IL

"Moby-Dick" is sung in English (with English supertitles)