A gritty first half saw Fire defender Francisco Calvo almost put the Fire on the board with a long distance bicycle kick in the 34th minute. RBNY striker Fábio hit the post in the 37th minute but, ultimately, both teams went into halftime scoreless.

NEXT GAME: Chicago Fire FC will return to Soldier Field for a match on Saturday, May 8 against Philadelphia Union. The match will begin at 12:00 p.m. CT and will be broadcast live on WGN-TV and CFFC Live/ChicagoFireFC.com. The match will also be transmitted locally in Spanish on TUDN 1200AM.

Tickets for all three May home matches are now on sale. 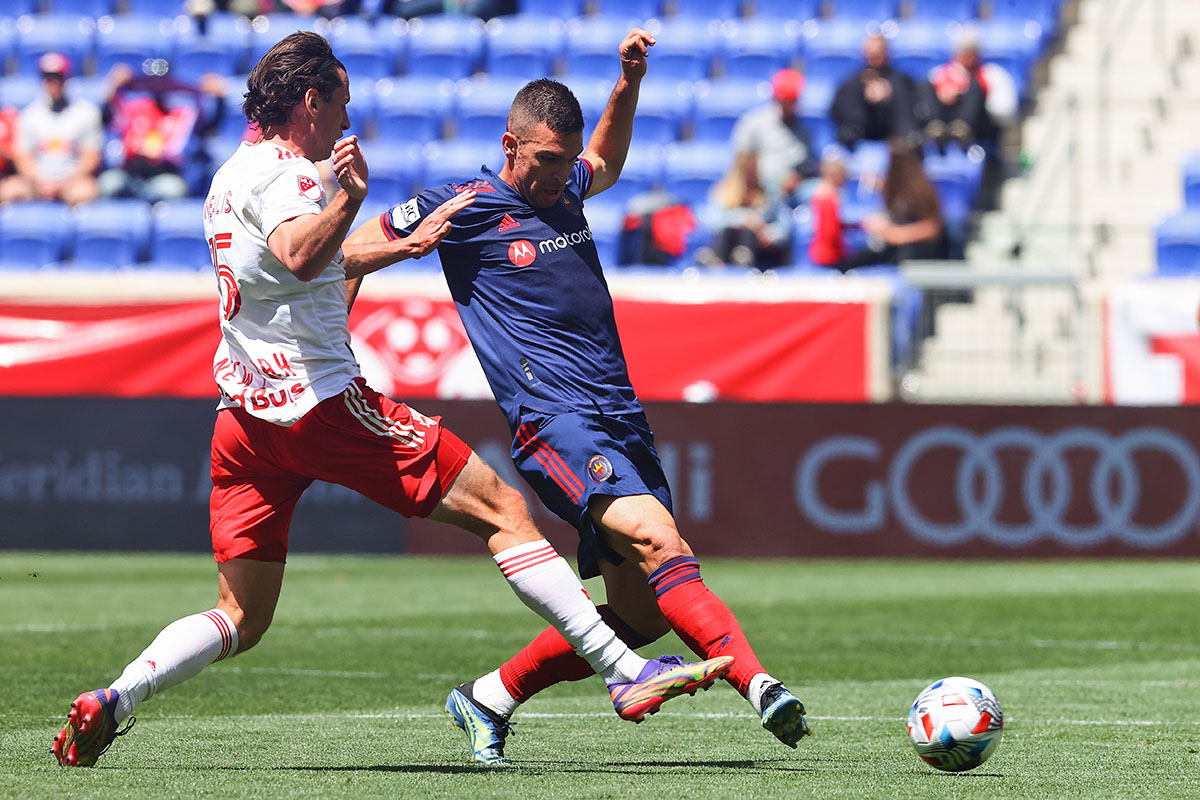 On the level of frustration within the group:
“It's always the same; that the team is there, the team is in the game, they stood up today, they followed the second balls and all the fighting, and then again out of nothing, you make a big mistake and it costs us the game. That's the frustrating thing, and we've got to change that as quick as possible. Otherwise we're going to talk about that the whole year.”

On Mauricio Pineda starting and the move of Alvaro Medrán starting on the left:
“Well, I wanted to have Mauri there. Mauri deserved it; he trained well to be there in, to give us a bit of stabilization, as well. He's a more defensive-minded midfielder there. I think he did his part and he had a lot of positives there with Mauri.”

“We, as of right now, we have a lot of wingers, who are players who can be out wide who are not there, who are hurt. We said, okay, let's see how Alvaro does there. I know Alvaro is not the solution for the future on the wing, and we know that. He had moments where he was good in the game. But we also know that when you put Alvaro out, there you're not going to get the same as you're going to get from a real winger. That's how I see it.”

On the differences between the first and second half:
“Yeah, I think the first half we were in the game. We didn't create many chances today, but we had a lot of moments where we controlled the game, where we played out well. We just then lacked a little bit in the final third of more verticality I think, but we were in the game. They had a chance or two as well but that's football. So it's not that they out-played us; I think we were in there, and obviously we know what happened in the second half.”

On the next match being a noon kickoff:
“Obviously for us we came in here yesterday, so it's always good if you don't have to fly in, fly out the same day. But again, this is not something we want to look for excuses. Last year, all the games were fly in, fly out the same day. For this game, we came yesterday, and yeah, I think it's the same for most of the teams. We'll prepare how we have to prepare.”

“Today I think there were different reasons. I have to watch the game again. Immediately right now after the game, I cannot really give such detailed answers.”

“But I'm not concerned about us creating chances. We need to fix the other side where we stop making easy mistakes and giving goals away out of nothing. That's what we need to change.”

On what the team can work on this week to prevent giving up preventable goals next week:
“Just keep the focus for 90 minutes, 90-plus minutes. We were focused in the first half. We didn't start well in the second half. Not focused enough and we got caught in transition. So we have to recover better, like sprint back faster.”

On the level of frustration within the group and whether there should be frustration:
“I don't think so. We have to keep believing in ourselves. Why be frustrated, it’s three games in. It's not a great start but we believe in ourselves and we know we can do better. So we have to just keep working hard and keep grinding.”

“Of course we are disappointed. That's the right feeling. We are very disappointed because we know we can do better but there are plenty of games left. So we keep focused on the next game.”

On what happened on New York’s first goal:
“I think that they won a duel in the back and they kicked it long. I was sprinting back with a striker, and the ball was bouncing and he ended up winning the duel, and he gave the cross. I think I should have prevented him giving the cross. And I think as a team we have to sprint back faster to recover. But I think I can do better.”

On how he would evaluate his play individually so far this season:
“I don't know. I have to take more time and look back on the first three games. I'm glad to be out there, be on the field and be fit. And of course I'm not there yet, where I want to be. But I just keep grinding and keep giving my all.”

On the mood in the dressing room considering the start to this season and carrying over from last season:
“Frustration. We've just got to keep trying to move forward and take positives where there are positives and continue working and training every week and trying to improve, because I mean obviously there's a lot of things that we can improve right now.”

“Any time you start the season like this, there's going to be frustration. You're not going to find one guy in this locker room who is going to be pleased with what's happening right now.”

On why the team keeps having games with a tight first half before conceding goals and ending up without points:
“At some point we have to stop talking about last year and look forward. We are three games into this season, and like I said, there are things that are happening right now that are preventable and we are shooting ourselves in the foot and those things can't continue if we want to win games, especially win games on the road.”

“We recognize it. We talk about it. We go over the video. We know that there are things that we need to improve. We know there are moments that we're losing games, and like you said, we're in these games. We're not getting played off the pitch. A lot of these times, we're the ones keeping the ball and making the play and then a silly moment and we concede.”

“You know, we have to continue to just try to move forward. Game 3, so the season is early, but we need to turn a corner here and we need to do it now.”

On how he would evaluate his work with the back line and how he is communicating and working together with the players in front of him:
“I mean, we've given up a good amount of goals in three games, so I don't think that's specifically just on myself and everyone on the back line. We've given up, what, seven goals in three games. So obviously there are things that we are not doing well and that are preventable. You know, at times I think it's communication, but I don't think it's a main issue for us. Like I said, we are finding moments to kind of concede goals where we shouldn't, and that's costing us points.”

“Like I said, we've got to just try to move forward. We've got to come together as a group and grind and make it happen.”