Two early first-half goals were the difference tonight. A shot from outside the box by Sporting KC midfielder José Mauri put Chicago behind four minutes into the game. Two minutes later, SKC extended its lead when forward Dániel Sallói hit a left-footed shot that forced Bobby Shuttleworth to make the save, however the rebound fell to forward Johnny Russell who tapped the ball into the back of the net.

In the second half, after making three substitutions at halftime, Chicago applied pressure, including two shots off the woodwork. In the 58th minute, midfielder Luka Stojanovic found space inside the 18-yard box and hit a blistering half volley off the crossbar. In the 64th minute, Fire midfielder Fabian Herbers hit a long range shot that also rattled the crossbar behind SKC goalkeeper Tim Melia. Stojanovic also had a header go just wide of the post in the 82nd minute. Despite recording 10 shots in the second half alone, Chicago was unable to get on the board. 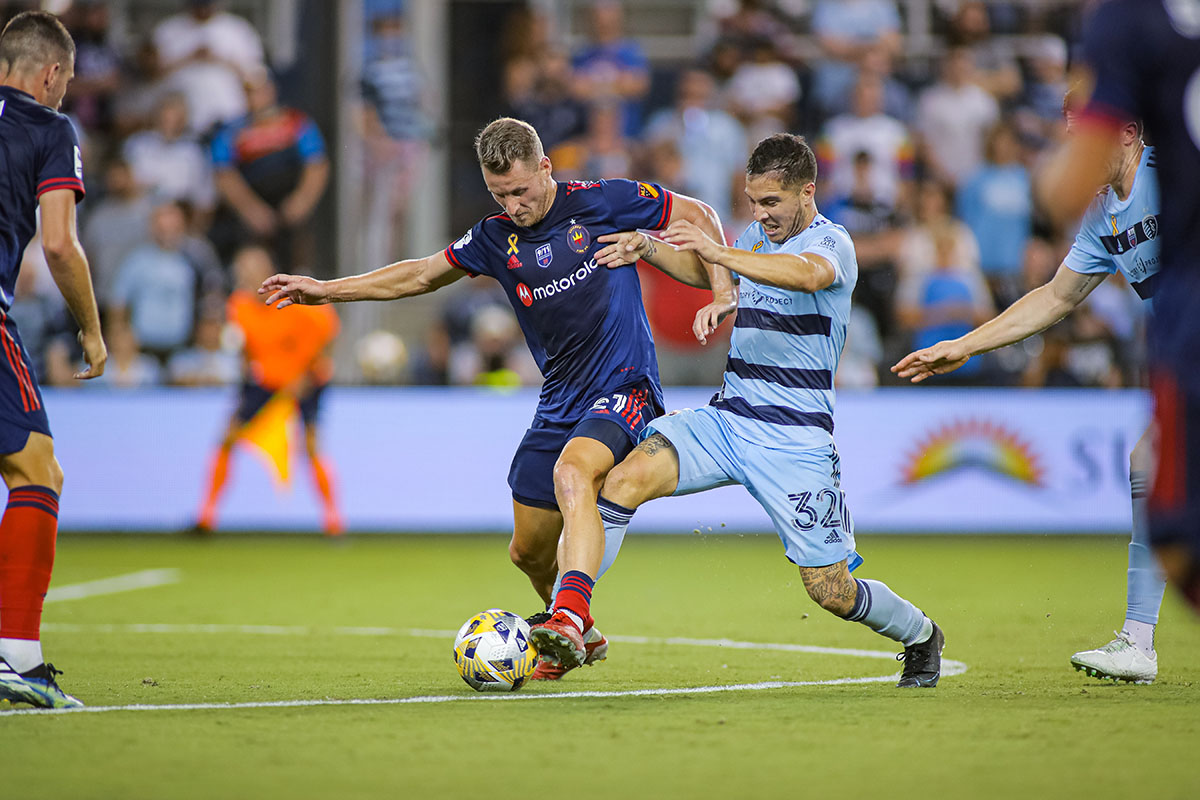 On what happened on the second allowed goal…
“Yeah, I'd have to see the full -- I haven't seen it on TV, the full sequence. I just remember the ball was on the sideline and then we have the one with Mauri (Mauricio Pineda) in the back where he loses the speed dual with I think Salloi, was it, I'm not sure. But I will have to see the full sequence, what we can do better there and besides of winning the one-on-one obviously.”

On the three substitutes coming on to start the second half…
“No one was injured. We were 2-0 down and I wanted to push the game, bring three fresh legs in there. Three fresh guys in there, and try to come back. That was the thought.”

We had I think a few really, really good chances to come back and then you all know in football, if you comeback 2-0 is a dangerous result, if you score a goal, you're on again and yeah, we were just not able to convert the chances we created.”

On his thoughts on Federico Navarro…
“Of course it's not easy but I saw a lot of good things out of Federico. It's what we knew of him, winning a lot of balls. Obviously after the yellow card he had to be a little more cautious, and there were certain moments where normally I think he would go even stronger and win even more balls but he showed a lot of character, a lot of strength in the duels, and also with the ball I saw some decent things.

I think it's important that he integrates now into the team, gets to know his teammates better and better and I think he will be a good addition to this team.”

On if he’s happy with Federico Navarro’s performance…
“Right now, immediately after the game, I am happy with his performance. I will have to watch the game again in more details, but I think he won a lot of balls there, and he was also very involved in the build up game and he was decent there.”

On the international break and if it made the team lose momentum coming off the road win against the Red Bulls…
“Look, it's a two-week break for everyone -- or for us, for them, not. They had a game last weekend. When you come out of a two-week break, we said, guys, let's be there from the start. That was our team talk just right before we went out, and let's be there from the start. There's no time to come into the game. We had a two-week break but it's very, very important to start well. We didn't do that. We came out very poor. We actually had a big chance before the 1-0, and then obviously we know what happened in minute four and minute six.

So yeah, is that because of the two-week break? I cannot tell you that. But of course we have to come back mentally in a state that you start the game well, that's very important, when you are taken a little bit out of the game rhythm.”

On the upcoming match on Wednesday....
“Yeah, we are going to talk about the game. We are going to regroup. We are going to get fresh again and then we go to D.C. and we start from zero. We have got to come back -- come out of the locker room obviously way better than today, and it's a game where we go with the mentality of winning. We played them. We played them there already. We lost 1-0. We know what will come to us. We played them at home, we were 2-0 up, minute 80. So, that’s it, that's the game. It's going to be a tough game again.

But like every game in this league, we go there with the mentality of winning. Every game starts at zero and that's how we are going to go there, regroup, get fresh, prepare and go and take the next opportunity.”

On what happened so early in the game to see the team down 2-0…
“Yeah, they start maybe these first ten, 15 minutes of the game, much (more) aggressive than us, and one little mistake by us opened their game. I think in this 10-15 minutes we suffer a lot of pressure and it was difficult to cover a lot of space because they attack us also from the side. They really played the first 10-20 minutes.”

On what head coach Raphael Wicky told the team at halftime…
“(What) we know. We have experienced guys and we know that we can change the game. I think the second half, we make more chances, we create more chances. We play more direct to the goal and I think we hit two or three times the post and we have clean chance one against one.

We just go out, don’t receive a goal and to try to score one, because that one can be, how they score alos the first one, the first one for us can be a game-changer.”

On whether the team lost some momentum due to the international break…
“Yeah, that's exactly, also, we have two players on the national team, they didn’t have time to come. And also I think Calvo has an injury in the last game with the national team. I remember we was good in the last months, we were in a lot of games and we don't concede goals. But as I said, they opened us very quick and this was the point of the game.”

On what happened on the second goal…
“I mean, it's tough to get a goal right after you concede a goal but I think the players found a one-on-one with Mauri and we were trying to push him to the side and I guess we didn't track well enough. To go down 2-0 is always tough to come back. Thought the guys showed a lot of heart. We didn't have lack of chances. We actually had quite a few. We have to finish those if we want to get back in the game. It was tough to go down 2-0 so soon. It was too much in the end.

On whether the team was resigned to a difficult game after going down 2-0…
“Of course, anybody, if you go down 2-0, you're asking for a hard game. We knew it was going to be a tough game coming in. You know, they have a great crowd and they are a good team at home. They have been doing well consistently through the year.

To go down 2-0 so soon definitely wasn't our game plan but as I said before, we had our chances. We hit the post twice. Had quite a few chances in the second half. Luka's header, the one with Chino (Offor) right there and if we put away any of those, you know, we get ourselves back in the game and unfortunately we couldn't find our way back in the game tonight.”

On playing as a traditional center back in the second half…
“Yeah, we changed to a four-back system.

It was good. I've played that in the past and I've played that with the national team before and Chivas USA for the entire year in 2008. Nothing new. From that spot as a three-back, left center back or four-back, I feel comfortable. So yeah, felt good.”

On if the team lost momentum due to the international break and whether it’s good to have another game so soon on Wednesday…
“Yeah, you never want to break. But actually we needed it because we have so many games back-to-back-to-back within midweek then the weekend then midweek for six or seven games straight, so it's good to have another chance to redeem ourselves coming up here very quickly, but I think we had enough time to prepare. I think we were good to go. Obviously the first goal was unlucky, and it's nice to have a challenge right away so that we can rebound back from this.”