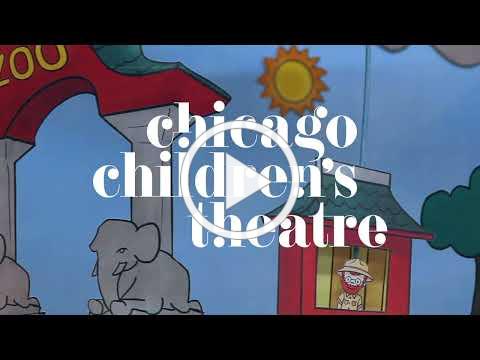 Edward the Elephant was always told he couldn't live his dream of being a famous tap dancer - but when he sneaks out of the zoo to meet his tap dancing idol he finally gets a shot at stardom!

These and more screen captures from Edward the Tap Dancing Elephant are here.

﻿Ralph Covert is the creator of Ralph's World, the family friendly rock and roll experience that parents and kids both love. After 10 critically acclaimed albums and countless shows from coast to coast, Covert is now working to bring the fun and energy of Ralph's World to TV with a new show, Ralph's World: Time Machine Guitar. He’s also a founding member of The Bad Examples, a staple of the Chicago rock scene since their heyday in the early '90's, when their song “Not Dead Yet'' was burning up the airwaves on Chicago's WXRT and on radio stations from coast to coast. Covert, with G. Riley Mills, has also co-written several successful children's musicals, including The Hundred Dresses, a Chicago Children’s Theatre world premiere in 2009. For more, visit ralphcovert.com.

Time Brickey is a tap dancer, musician, a teaching artist at Chicago Children’s Theatre, and a generally entertaining guy from Chicago. He is a company member of M.A.D.D. Rhythms and a collaborator with the Chicago Human Rhythm Project’s Stone Soup Rhythms. Brickey has performed in Dance for Life Chicago, the Stomping Grounds Festival, JUBA!, and as a soloist at the Billy Strayhorn Centennial, where the Chicago Tribune described him as a “Literal Loose Cannon.” Brickey was featured tap dancing on 91.1 Vocalo with DJ Ayana Contreras for Reclaimed Soul in The Parks, and in the Jeff award-winning production of 42nd St. at Drury Lane Theatre in Oakbrook. Brickey is also a frequent collaborator with Cabinet of Curiosity. For more, visit heyti.me.﻿

For information on Chicago Children’s Theatre’s education programs, including in-person classes, camps and CPS School’s Out Day Camps, visit chicagochildrenstheatre.org/family-programs. Summer camps are on sale now and sell out quickly. Act now and register at chicagochildenstheatre.org/camps to assure a spot.

Next up on Chicago Children’s Theatre’s live stage is The Very Hungry Caterpillar Show, a bright, bold, puppet-filled live version of Eric Carle’s timeless children’s book about an insatiable caterpillar that munches its way to become a full-fledged butterfly. Performances are April 15-June 4, 2023: Saturdays and Sundays at 9:30 a.m. and 11:30 a.m. Tickets start at $35.25, on sale now at chicagochildrenstheatre.org. The Very Hungry Caterpillar Show is recommended for all ages, 6 months and up.

Chicago Children’s Theatre is located at 100 S. Racine Ave. in the heart of the West Loop. Email boxoffice@chicagochildrenstheatre.org or call (312) 374-8835 to learn about discounted rates for schools, playgroups, birthday parties and scouting groups.

﻿“The Chicago theater scene is legendarily vibrant, so naturally a number of companies tailor productions to younger audiences. The cream of the crop is Chicago Children’s Theatre.” – Chicago Tribune

Chicago Children’s Theatre was founded in 2005 with a big idea: Chicago is the greatest theater city in the world, and it deserves a great children’s theater. Today, CCT is the city’s largest professional theater company devoted exclusively to children and young families. CCT has a national reputation for the production of first-rate children’s theater with professional writing, performing, and directorial talent and high-quality design and production expertise.

In January 2017, following 11 years as an itinerant company, CCT celebrated the opening of Chicago Children’s Theatre, The Station, 100 S. Racine Ave. in the West Loop. The building, formerly the Chicago Police Station for the 12th District, was repurposed into a beautiful, LEED Gold-certified, mixed-use performing arts, education and community engagement facility that now welcomes all Chicago families. In addition to presenting productions on its flexible stage, CCT offers education programs year round for ages 0 to 14, including performing arts classes, workshops, winter and spring break camps, and summer camps.

CCT provides thousands of free and reduced-price tickets to under-resourced schools each year in partnership with Chicago Public Schools. It also continues to grow its commitment to all Chicago children with a full slate of Access services for patrons with disabilities, including ASL interpretation and open captioning, touch tours and sensory friendly performances.