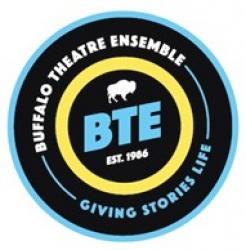 Buffalo Theatre Ensemble (BTE), the professional Equity company in residence at the McAninch Arts Center (MAC), opens its 2022-2023 three-play season with Bruce Norris’ Tony, Olivier and Pulitzer Prize-winning “Clybourne Park,” directed by Kurt Naebig+ (Sept. 8 – Oct. 9). The thought-provoking work received its Chicago premiere at Steppenwolf Theatre Company and will be presented at the MAC prior to the release of its highly anticipated film adaptation. There will be a preview performance 8 p.m., Thursday, Sept. 8; Press Opening is 8 p.m. Friday, Sept. 9.

Inspired by Lorraine Hansberry’s “A Raisin in the Sun,” “Clybourne Park” is a provocative two act comedy/drama set in the same house 50 years apart in the suburbs of Chicago. Act I is set in 1959 when Russ and Bev are moving to the suburbs – selling their home to the neighborhood’s first Black family. Act II is decades later when a young white couple buys the same property with plans to demolish and build a larger home. Now a predominately Black community battles to protect the historic qualities of the community in the face of gentrification. The New York Times calls “Clybourne Park,” “vital, sharp-witted and ferociously smart.”

“Clybourne Park” premiered in February 2010 at Playwrights Horizons in New York and had its Chicago premiere in 2011 at Steppenwolf Theatre Company in a production directed by Steppenwolf ensemble member Amy Morton. “Clybourne Park” was awarded the 2011 Pulitzer Prize for Drama and the 2012 Tony Award for Best Play. This past May it was announced there will be an upcoming film adaptation of the play, to be directed by Pam MacKinnon, director of the 2010 stage premiere. The film is due to begin shooting in the fall in the UK and on location in the U.S.

In addition to “Clybourne Park,” playwright Norris’ plays include “The Infidel” (2000), “Purple Heart” (2002), “We All Went Down to Amsterdam” (2003), “The Pain and the Itch” (2004), “The Unmentionables” (2006) and “A Parallelogram” (2010) all of which had their premieres at Steppenwolf Theatre Company. Norris’ honors include Pulitzer, Tony and Olivier awards for “Clybourne Park” and the Steinberg Playwright Award (2009) for his body of work and outstanding potential.

Says play director Naebig, “I love directing the works of Chicago-based playwrights. They are often insightful without being confrontational. In ‘Clybourne Park,’ Norris uses a light hand to address topics that can be uncomfortable, such as race and gentrification and in doing so, creates a safe space for discussion and possibly change.”

Tickets are $42. Single show tickets go on sale in person at the MAC Box Office beginning at 11 a.m., Saturday, Aug. 6. Single show tickets go on sale online at www.AtTheMAC.org and by phone at 630.942.4000 beginning noon, Tuesday, Aug. 9, Discounts are available for groups of 10 or more. For group sales information email kazmierskik@cod.edu or call 630.942.3026. Tickets are currently on sale by subscription. A Season Flex-Pass is also available online redeemable for each production during BTE’s 2022 – 2023 Season. For more information about BTE’s season, visit www.AtTheMAC.org or call the Box Office 630.942.4000.

• Pre-show discussion with the director and designers 6:45 p.m. Thursday, Sept. 8

ASL interpreters will be located near the stage for patrons who are deaf or hard of hearing, seated in an area of the theater that gives the best sight lines to follow the interpretation and the action on stage. To access reserved seating in view of the interpreters for a signed performance, call the Box Office at 630.942.4000 or 630.858.9692 (TDD), or visit www.AtTheMAC.org for additional information.

BTE policies will be kept up-to-date with any issued by the State of Illinois, COD and Actors Equity. Please check AtTheMAC.org closer to the date of your performance for COVID Protocols.

The mission of Buffalo Theatre Ensemble is to provide a forum in which artists, scholars, writers, students and community members explore new ideas and provocative issues through the production of quality theater for the enjoyment of its audiences. Since 1986 BTE has staged more than 120 productions.

Buffalo Theatre Ensemble is partially supported and funded by generous grants from The DuPage Foundation, Benevity, Choose DuPage, the Shuttered Venue Operators Grant Program, The Norm Woodel Inspiration Fund, The Illinois Arts Council, and a gift from Dr. Thomas R. Scott and the late Shirley Klein Scott of Glen Ellyn through the College of DuPage Foundation and the generous support of the College of DuPage Trustees and the McAninch Arts Center Staff.

McAninch Arts Center at College of DuPage is located 25 miles west of Chicago near I-88 and I-355. It houses three indoor performance spaces (the 780-seat proscenium Belushi Performance Hall; the 186-seat soft-thrust Playhouse Theatre; and the versatile black box Studio Theatre), the outdoor Lakeside Pavilion, plus the Cleve Carney Museum of Art and classrooms for the college’s academic programming. The MAC has presented theater, music, dance and visual art to more than 1.5 million people since its opening in 1986 and typically welcomes more than 100,000 patrons from the greater Chicago area to more than 230 performances each season.