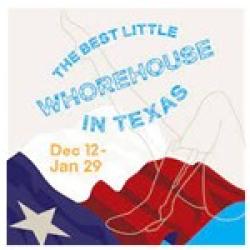 5 Stars! Highly Recommended!  Juicy and flavorful, “The Best Little Whorehouse in Texas” is a treat! The acting is fantastic; the choreography is beautiful; the singing is excellent; and the music is fun and enlivening. The original Broadway musical came out in 1978, written by Larry L. King and Peter Masterson, with music and lyrics by Carol Hall. But this new production by the Theo Ubique company can boast of originality too: with both female and nonbinary characters playing the “working girls” and with lots of gender fluidity: men playing women’s roles, women playing men’s roles, etc., and doing so convincingly. Due to the marvelous trifecta of three talented women: director Landree Fleming, choreographer Jenna Schoppe, and music director Isabella Isherwood, this largely comedic show provides an enjoyable evening’s-worth of live theatre.

The story may be familiar to most. The whorehouse, known as the Chicken Ranch, was based on a real place in LaGrange, Texas: fictionalized as a small Texas town called Gilbert, located somewhere between Austin and Houston. Miss Mona (the super-talented Ann Sheridan Smith) is the kind-hearted owner and madam of the Chicken Ranch, who wants to satisfy a vital need in the community. She and Miss Jewel (Cynthia F. Carter) run the whorehouse and don’t think of it as being “dirty” or as prostitution.

In the course of doing business, they run afoul (pun intended) of the Bible-thumping religious crusader Melvin Thorpe (Daniel Blakeman) the town’s mayor and the State’s senator and governor (Teddy Gales), all of whom want to close the ranch down. Sheriff Ed Earl Dodd (Marc Prince) is called in to enforce the law.

There are many highlights in this performance. The opening number when Carter sings the blues is remarkable. The sexy moves and provocative dancing are done comedically and tastefully—and get the point across. Casting is perfect, including “working girls” of all different body types: from flat chested to hefty. The actors are great as they transition from one character to another, often of a different gender. For example, Michaela Shapiro (they/them) plays a young woman named Shy and later plays a guy on the football team. Quinn Simmons (they/them) is always in a nonbinary/multi-gendered role.

Related to this, the costume changes are frequent and done very well from one role to the next, one gender to the next, and, of course, between scenes. I especially liked the changes made literally in front of the audience. The smoothness in transitions between scenes and from one part of the space to another is a credit to Fleming’s excellent directing. Related to this, the scenic design by Manuel Ortiz is cleverly done, depicting both the inside and outside of the ranch, and I especially liked how the cabaret space in the venue is absorbed within the story, such that the actual bar area becomes part of the set and the tables near the stage become part of a restaurant scene. When we sit so close to the stage and much of the action is directly before us, the audience feels that we have become a part of the show too.

On the night I visited the theatre, two understudies performed: Laura Quiñones (Angel) and J. Alan (Ginger). Other actors include: Halle Bins, Kaitlin Feely, Brandon Acosta, Michael Penick, and Bruce Holtman. I especially loved listening to the performance orchestra, made up of conductor, keyboardist, and music director Isherwood, plus the phenomenal Raquel Navarro (violin), Sam Schacker (guitar), Jeff Harris (bass), and Ben Heppner (drums). Sound design by Stefanie M. Senior and lighting design by Josiah Croegaert are both on the mark. Costume design by Gregory Graham works nicely for this show.

While this theatrical presentation does not substitute for the 1982 movie, starring the incomparable Dolly Parton, the nuance is somewhat different in today’s version. Forty years later, the Chicken Ranch is alive and well and more inclusive of different genders. Today the Ranch serves up a variety of experiences, perhaps unimagined by its former owners. The upshot is that this 2-hour and 30-minute performance, including intermission, is exciting and memorable in oh-so-many ways! You have to see it for yourself!

“The Best Little Whorehouse in Texas” is playing through January 29, 2023, at Theo Ubique, 721 Howard Street, in Evanston.

For more information about the show, please go to https://theo-u.com/the-best-little-whorehouse-in-texas/.

In addition to single tickets, “The Best Little Whorehouse in Texas” is also available

as a part of a three-pack subscription offer that includes the two remaining shows in the season. See: https://ci.ovationtix.com/35352/store/packages.

For a one-stop dinner and theatrical experience, you may add a 3-course prix fixe meal for an additional $30 when you purchase your tickets at least one week ahead of the scheduled performance. For more information, see the section on the Cross-Rhodes Restaurant, at https://theo-u.com/the-best-little-whorehouse-in-texas/.

For general information about Theo Ubique and to learn about their other offerings, visit: https://theo-u.com/.