In partnership with Chicago’s Department of Cultural Affairs and Special Events (DCASE), Art on theMART, the largest permanent digital art projection in the world displayed across the 2.5-acre river-façade of theMART in Chicago, today announced that acclaimed artist Nick Cave’s Ba Boom Boom Pa Pop Pop, will be extended until October 2. Cave’s projection will be shown twice nightly, features completely original footage together with remastered content from Cave’s original film Drive-By (2011). The work makes use of theMART’s unique location and the building’s status as an iconic Chicago landmark, coincides with his first career- spanning retrospective, Forothermore, at the Museum of Contemporary Art Chicago, on view through October 22, 2022. 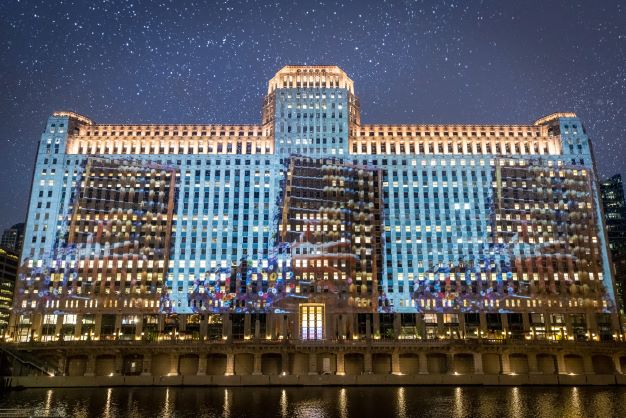 For almost three decades, internationally renowned, Chicago-based artist Nick Cave (b. 1959) has been working at the intersection of sculpture, installation, sound, performance and film to address pressing societal issues related to race, gender, sexuality and class. As an activist, educator and community-builder, Cave often activates and engages the public sphere as part of his artistic practice.

Cave is perhaps best known for his Soundsuits, colorful and exuberant sculptural body suits comprised of synthetic hair and raffia, initially created in direct response to the brutal police beating of Rodney King in 1991. Camouflaging the body, Cave’s Soundsuits mask the wearer’s identity, creating a ‘second skin’ which transcends boundaries of race, class and gender—forcing the viewer to look beyond preconceived notions and internal biases.

Bridging dance, performance, film and public art, Ba Boom Boom Pa Pop Pop features Cave’s iconic Soundsuits in motion. Brightly colored figures dance across theMART’s iconic riverside façade, transporting the viewer to a kaleidoscopic otherworld on the river's edge. Amidst the flurry of movement, a figure adorned with a stop-sign emerges, reminding viewers of the underlying sense of urgency despite the jubilant expression of freedom.

Contextualizing his new video projection, Cave states, “Chicago is a living representation of America as a melting pot. My hope is that by turning our collective gaze up to theMART's monumental facade and taking in the Soundsuits in all their limitless exuberance, we can let some of that positivity seep into our own skins.”

“Nick’s work wonderfully complements our mission,” added Noble. “His artistic practice has always focused on themes of accessibility and building community—going beyond the gallery walls and bringing important topics into public space. In these projections, Cave does just that while reaching a larger, more diverse audience.”

About Art on theMART

Art on theMART is the largest permanent digital art projection in the world, projecting contemporary artwork across the 2.5-acre river-façade of theMART. This expansive permanent public art platform continues Chicago’s legacy of providing both residents and visitors with exceptional art that is both free and accessible to all. Projections are visible to the public from Wacker Drive and along the Chicago Riverwalk.

The program content rotates seasonally and is selected with the assistance and expertise of the Curatorial Advisory Board. The City of Chicago and theMART work in partnership to manage and curate the projected artwork over the course of a 30-year agreement. Privately funded by Vornado Realty Trust, owner of theMART, Art on theMART marks the first time a projection of its size and scope is completely dedicated to digital art with no branding, sponsorship credits or messaging. The permanent projection system illuminates theMART with 34 state-of-the-art projectors totaling almost one million lumens.

theMART (formerly The Merchandise Mart), located in the center of the sought-after River North submarket, is interwoven into the fabric of Chicago as an innovator in business, technology, culture, art, media and more. As the largest privately owned commercial building in the United States, it is also one of the world’s leading commercial buildings, wholesale design centers and the preeminent international business location in Chicago. Encompassing 4.2 million gross square feet, theMART spans two city blocks, rises 25 stories, and is visited by an average of 30,000 people each business day and nearly 10 million people annually. Offering continuous innovation and creativity from leading manufacturers and design forward showrooms, theMART serves as the home to Chicago's most creative and technologically innovative companies including Motorola Mobility, 1871, Yelp, PayPal and MATTER, as well as Fortune 500 companies ConAgra Brands, Allstate, Medline Industries, Beam Suntory and Grainger. For more information, visit www.themart.com.

About the Department of Cultural Affairs and Special Events

The City of Chicago Department of Cultural Affairs and Special Events (DCASE) supports artists and cultural organizations, invests in the creative economy, and expands access and participation in the arts throughout Chicago’s 77 neighborhoods. As a collaborative cultural presenter, arts funder, and advocate for creative workers, our programs and events serve Chicagoans and visitors of all ages and backgrounds, downtown and in diverse communities across our city — to strengthen and celebrate Chicago. DCASE produces some of the city’s most iconic festivals, markets, events, and exhibitions at the Chicago Cultural Center, Millennium Park, and in communities across the city — serving a local and global audience of 25 million people. The Department offers cultural grants and resources, manages public art, supports TV and film production and other creative industries, and permits special events throughout Chicago. For details, visit www.Chicago.gov/DCASE and stay connected via our newsletters and social media.