The Auditorium Theatre (Chicago’s landmark stage at 50 E Ida B. Wells Drive) is proud to present Les Ballets Trockadero De Monte Carlo, known by their fans as “The Trocks,” in a one night only performance Saturday February 11, 2023 at 7:30 PM.

As the world’s leading all-male ballet company, Les Ballets Trockadero De Monte Carlo proves that men too can be beautiful, graceful - and hilarious - while dancing on tiptoe, or en pointe. The Trocks blend drag, satire, comedy, and rigorous technique to both parody and lovingly pay homage to classical ballet aesthetics. Performing the male roles and the female roles en travesti, or in drag, The Trocks tackle everything from ballet’s most enduring choreography like Swan Lake to modern dances and commissioned works. 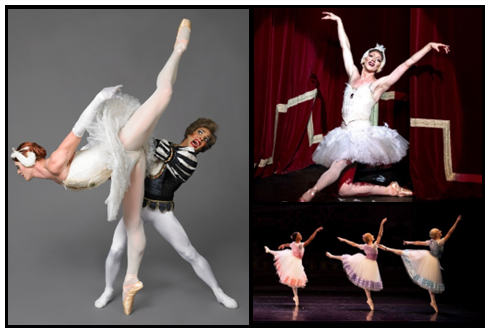 Every member of The Trocks performs under both a male and a female persona each with its own name and backstory like Anya Marx, the proprietress of America’s only mail-order course in ballet; Minnie Van Driver, who has a strong sense of movement; and the Legupski Brothers, who are neither Russian nor related. Company dancers perform every role authentically whether their character demands a tutu or extra tendus.

“Here at the Auditorium Theatre, we take dance seriously!” says Auditorium Theatre CEO Rich Regan, “which is why we are excited to present The Trocks – who are both serious dancers and seriously hilarious- to our audiences. The Trocks will spark delight for studied ballet aficionados and dance newbies alike.”

Swept up into the magical realm of swans (and birds), this elegiac phantasmagoria of variations and ensembles in line and music is the signature work of Les Ballets Trockadero. Perhaps the world's best-known ballet, its appeal seems to stem from the mysterious and pathetic qualities of the heroine juxtaposed with the canonized glamour of 19th century Russian ballet.

Stylistic heir to Balanchine's Middle-Blue-Verging-On-Black-and-White Period, this ballet has become a primer in identifying stark coolness and choreosymphonic delineation in the new(neo) neo-new classic dance.  It has been called a wristwatch for Balanchine clock-time.

Paquita is a superb example of the French style as it was exported to Saint Petersburg in the late 19th Century. Choreographer Petipa commissioned Ludwig Minkus, to write additional music added to the original work. The resulting Pas de Trois and a Grand Pas de Deux are the only fragments of Paquita that have been preserved. The dancers display a range of choreographic fireworks, which exploit the virtuoso possibilities of academic classical dance, enriched by the unexpected combinations of steps.

*Program subject to change without notice.

Les Ballets Trockadero De Monte Carlo performs at the Auditorium Theatre Saturday February 11, 2023 at 7:30 PM. Tickets are $30-$76 and are now available at auditoriumtheatre.org or by calling 312.341.2300, or at the Box Office at 50 E Ida B Wells Drive in Chicago, IL. Click here for phone and in-person hours.

The Auditorium Theatre is grateful for the support of the 2022-23 Season Global and Chicago Dance Sponsor, The Florian Fund, and Presenting Sponsor, Denise Littlefield Sobel.

The Auditorium Theatre 2022-23 Season is made possible in part with support from the John D. and Catherine T. MacArthur Foundation and the Illinois Arts Council Agency. The Auditorium’s official hotel partner is the Palmer House Hilton.

Les Ballets Trockadero de Monte Carlo was founded in 1974 by a group of ballet enthusiasts for the purpose of presenting a playful, entertaining view of traditional, classical ballet in parody form and en travesti – in drag. Les Ballets Trockadero first performed in the late-late shows in Off-Off Broadway lofts. By mid-1975, The Trocks’ loving knowledge of dance, comic approach, and commitment to the notion that men can, indeed, dance en pointe without falling flat on their faces, was already garnering attention beyond the Company’s New York home. Since those beginnings, The Trocks have established themselves as a major dance phenomenon throughout the world.

The original concept of The Trocks has not changed.  It is a Company of professional male and non-binary dancers performing the full range of the ballet and modern dance repertoire, including classical and original works in faithful renditions of the manners and conceits of those dance styles. The comedy is achieved by incorporating and exaggerating the foibles, accidents, and underlying incongruities of serious dance.  The fact that men dance all the parts--heavy bodies delicately balancing on toes as swans, sylphs, water sprites, romantic princesses, angst-ridden Victorian ladies--enhances rather than mocks the spirit of dance as an art form, delighting and amusing the most knowledgeable, as well as novices, in the audiences.  They will, as they have done for almost fifty years, “Keep on Trockin’.” For more information about the company, visit trockadero.org.

The Auditorium Theatre, located at 50 E. Ida B. Wells Drive at Roosevelt University in Chicago, is an Illinois not-for-profit organization committed to presenting the finest in international, cultural, community, and educational programming to all of Chicago and beyond as The Theatre for the People. The organization also is committed to the continued restoration and preservation of this National Historic Landmark that originally opened in 1889.