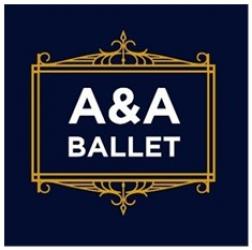 A&A BALLET (A&A), one of the fastest growing performing arts and educational organizations in Chicago, under the artistic direction of Alexei Kremnev and Anna Reznik, has announced "The Art Deco Nutcracker" for its fifth annual performance, taking place Dec. 4 at Chicago’s Athenaeum Theater (2936 North Southport Ave). Set in 1920s America and performed by impeccable young talent, with many dancers moving on to powerhouse companies such as American Ballet Theater, Houston Ballet, Bolshoi Ballet and more, the storyline to Kremnev's choreography is reworked to feature added scenes and characters, all inspired by the unique sophistication of the Art Deco era.

"The Art Deco Nutcracker" is Kremnev's eighth full-length ballet, and presents a fresh take on the beloved holiday tradition featuring Tchaikovsky's score. The Huffington Post describes his choreography as “encompassing the best and brilliance of what movement can be while breaking boundaries of what we know.” His previous works have been presented at prestigious stages across the globe, including the world-renowned Bolshoi Theatre in Moscow, Lincoln Center in New York, the Opernhaus Zurich in Switzerland and more.
"After the past year has deeply impacted dance, we look forward to showcasing A&A BALLET’s talent and performing on stage at Athanaeum Theatre for the first time, while bringing families together to enjoy a holiday tradition in Chicago," said Artistic Director Alexei Kremnev.

Roles include classics such as the Sugar Plum Fairy performed by Trinity Santoro and Bridget Fox, Clara by Emma Parnell, the Nutcracker Prince by Aiden Moss, and Drosselmeyer by Alexei Kremnev, and Mice and Soldiers. In addition to the art deco twist, Kremnev's choreography also has some added style with additional character roles that are not typically featured in this storyline.
Adding to the production’s unique intrigue, a scene in Act ll is inspired by the legendary Loie Fuller, a Chicago native and pioneer of modern dance, along with a filled-out Grand Pas ll, featuring three Cavaliers performing alongside the Sugar Plum Fairy, which is typically performed by one. The Mother Ginger scene will also feature an award-winning team of rhythmic gymnasts.

The Art Deco theme is brought to life with set designs by production designer Gabriel Brandon-Hanson, who holds a background in high-fashion. Recently profiled in Vogue, Brandon-Hanson brings his finely tuned aesthetic sense to the dance world; Imaginative projections for all scenes have been designed and created in France as backdrops. Additional animated projections provide a second visual layer which creates a deep HD effect for each scene.  Lastly, lighting by Chicago designer Collin Helou and Wardrobe by Laura Skarich.
Tickets for "The Art Deco Nutcracker," taking place Dec. 4 at 2 & 7 p.m. at $25 and are available at The Athenaeum Theater’s website here. Following the City of Chicago guidelines, guests in attendance are required to wear face coverings.

Alexei Kremnev is the co-founder of A&A Ballet, formerly the founding Artistic Director of The Joffrey Academy of Dance and the Joffrey Studio Company (2009-2016) dedicated to developing young talent. He began his career in Moscow at the world-famous Bolshoi Ballet Academy (Degree of Ballet Artist), the Russian Academy of Theatrical Art (GITIS), and the Moscow State Academy of Choreography (Degree in Pedagogy and Choreography). Either as a principal artist, choreographer or teacher, he has worked internationally with the Moscow Festival Ballet (Russian National Ballet), England's Northern Ballet Theatre, Joffrey Ballet, Cincinnati Ballet, BalletMet, Tulsa Ballet Theatre, Bolshoi, Russian and European Stars of the Ballet. Kremnev received superlative reviews.

He received the Outstanding Choreographer Award at Youth America Grand Prix (YAGP) in 2021, 2009, 2007, and 2006 as well as the Outstanding Teacher Award in 2017 and 2018. Additionally, he is the Laureate of the Leonide Massine Award, the Nureyev International, and Lifar International Ballet Competition. Kremnev’s choreography has been presented at the legendary Bolshoi Theatre in Moscow in 2004-2006, Lincoln Center in New York in 2015, and the Opernhaus Zurich in 2016 and 2017. In 2001, Kremnev was recognized as one of the Most Influential People in the Arts in Cincinnati and was elected to the Advisory Board on Eastern Europe for Illinois under Senator Mark Kirk in 2011.

In 2013, Kremnev received the Achievement Award in Culture from the Chicago Sister Cities International (CSCI), and the Business Leaders Award from the American Councils for International Education and Bureau of Educational and Cultural Affairs at the United States Department of State in 2017. Kremnev's artistic vision was also essential in the creation and success of the Gala of the International Ballet Stars in Cincinnati, Children's Ballet Theatre Series, and Winning Works: Choreographers of Color at the Joffrey Ballet.

Anna Reznik is the co-founder of A&A Ballet and former Founding Artistic Director of the Joffrey Academy and the Joffrey Studio Company (2009-2016) and has been praised for her extraordinary ability to work with today's young dancers. She began her career in Moscow at the world-famous Bolshoi Ballet Academy (Degree of Ballet Artist) and the Bolshoi Institute of Choreography (Degree in Pedagogy). Reznik toured throughout the world as a Principal Artist with the Moscow Festival Ballet (later the Russian National Ballet), England's Northern Ballet Theatre, Cincinnati Ballet, BalletMet, Tulsa Ballet Theatre, and in galas with the Bolshoi, Russian, and European Stars of the Ballet. Ms. Reznik has won numerous awards, including a Special Diaghilev Prize, Silver Medal at the 1996 Lifar International Ballet Competition, as well as the top prize at the 1996 Nureyev International Ballet Competition and the 1996 Maya International Ballet Competition.

A&A BALLET is one of the fastest growing performing arts and educational organizations in Chicago and has quickly gained an impressive national and international reputation. A&A BALLET is devoted to training in strong, versatile dance technique, as well as the development of personality, independence and artistry. Led by internationally acclaimed artists and former Founding Artistic Directors of the Joffrey Academy and Joffrey Studio Company, Anna Reznik and Alexei Kremnev, A&A offers a wide variety of classes, professional performance opportunities, international tours, private instruction, choreography and training for dancers ranging from age 3 to adult. Since 2016, A&A students have secured more than 150 full scholarships and a dozen apprentice and studio company positions with powerhouses including American Ballet Theater, Houston Ballet, Princess Grace Academy of Monaco, Bolshoi Ballet, Colorado Ballet, BalletMet and Sarasota Ballet.

Based in their new state-of-the-art in Printers Row, A&A is committed to ensuring the safety of all its students, performers, staff, and visitors amidst the global pandemic. A&A staff strictly enforce social distancing guidelines, facial coverings are to be worn at all times when inside the building, and students and staff alike are encouraged to stay at home if they feel any COVID-19 symptoms.