Match the Indiana author to the appropriate book title

A.  The Friendly Persuasion  B. The House of a Thousand Candles     C. The Devil's Dictionary  D.  The Magnificent Ambersons 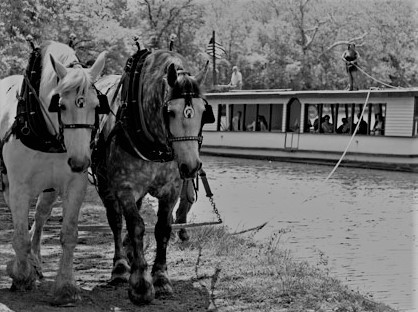 1839     The Whitewater Canal opened between Lawrenceburg and Brookville.  The tow boat Ben Franklin was greeted with much enthusiasm by citizens all along the way.  Pulled by mules, it was the first boat to travel the entire route.  Before railroads, canals provided much needed passageways within the state for the transport of people and goods.

1918     A Piggly Wiggly Store opened on East Washington Street in Indianapolis.  Part of a fast-growing chain, it was described as a "self-serving" grocery store.  Instead of giving clerks a list of items to retrieve, shoppers picked up the goods themselves.  Music was provided on opening day and flowers were presented to each customer.  This was the second such store in Indiana.  The first, in Elwood, had opened three months earlier.

1927     Hanover College celebrated its centennial with a pageant attended by over 2,000 alumni and friends.  A marker was unveiled at the site of the old log house where the college was established in 1827.  Attending the ceremony was Dr. John M. Coulter, grandson of founder Dr. John Finley Crowe.  The previous evening, many in the group had embarked on a sunset to dawn "Hanover Moonlight" excursion on the Ohio River.

1940     Janet Scudder died in Rockport, Massachusetts.  Born in Terre Haute, she attended art classes at Rose Polytechnic Institute (now Rose-Hulman.)  She studied at the Cincinnati Gallery of Art and the Chicago Institute of Art and later moved to Paris to work with the masters.  One of the most successful sculptors of her day, she won praise for her statues, medallions, garden art, and fountains.

HOOSIER QUOTE OF THE WEEK

"Someone has said that even criticism is better than silence.  I don't agree to this.  Criticism can be very harmful unless it comes from a master."  - - - Janet Scudder (1869-1940)

Janet Scudder was one of three women sculptors from Indiana who were invited to create statues for the Indiana Building at the Columbian Exposition in Chicago in 1893.  She created a female figure in metal, nearly six feet tall, covered with white plaster.  Her statue, called "Nymph," joined another one in similar style by Frances Goodwin, from New Castle.  Her creation was named "Education."  A third figure of similar design was submitted by Retta Matthews, from Arlington, Indiana.  Her entry was simply named "Indiana."  All three statues, tall and impressive in soft white tones, drew praise from visitors who viewed them during the fair.  After the event, all three creations returned to Indiana.  128 years later, two of them have gone missing.  Only the one by Retta Matthews is known to exist, and it is on display at the Indiana Statehouse.

1944     As news spread of the "D-Day" invasion, school children across the state sang patriotic songs and recited the Pledge of Allegiance.  Teachers brought radios into classrooms to keep students informed of breaking current events.  To many Hoosiers, the military operation was a hopeful sign of the beginning of the end of World War II.  (Pictured:  The headline from the Lafayette Journal and Courier for June 6, 1944)

1971     Indiana University's Lilly Library acquired the collection of books, manuscripts, letters, and photographs of British author Ian Fleming (pictured.) Included were the typed manuscripts of his James Bond novels, with comments, changes, and corrections in the author's own handwriting.  The acquisition encompassed over 1,000 rare books and other printed material from the 19th and early 20th centuries.

We're all poor bookkeepers when it comes t' givin' credit where it is due .

You are invited to take a "Virtual Tour" of the Indiana Statehouse.  Just click the link at the bottom of this column.

Tours of the Indiana Statehouse are offered Monday through Friday by appointment only.  For more information, please contact us.