Match the stadium to the school 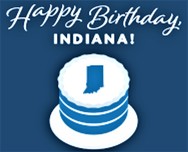 1816     December 11   President James Madison signed a Congressional resolution admitting Indiana to the Union as the 19th state.  The new state government would be centered in the capital city of Corydon.  Jonathan Jennings was elected to be the state's first governor.

Did You Know?      This year's theme for Statehood Day is "Indiana's Great Outdoors."  Fourth-graders were invited to write essays on the topic.  Over 400 entries were received.  Here is the one which won First Place, written by Josiah C., a home-school student in Greenwood:

From the shores of Lake Michigan to the banks of the Ohio river, Indiana is filled with amazing nature.  You can see massive sand dunes in Indiana Dunes National Park, explore history at Falls of the Ohio State Park, or go fishing on a boat at Cagles Mill Lake.

Indiana Dunes National Park is a great place to fly a kite.  There are some amazing snakes, like the blue racer, and caverns carved out of limestone.  Some of the impressive dunes are two hundred feet tall.  Some people think it is a desert, but it is actually on the shores of Lake Michigan.  There is plenty of water there!

One of the largest exposed fossil beds in the world is in the Falls of the Ohio State Park.  There are 220 acres of fossil beds.  You cannot take fossils home, but you can explore the fossil beds when the water is low in the fall.  You can go fishing, hiking, and picnicking while visiting the park.

Cagles Mill Lake was built in the 1950s as a flood control reservoir.  A flood control reservoir is a dam that makes sure that another river does not get too high or low by creating a lake.  This one protects the Eel and White Rivers.  You can also do fun things there like go fishing in a boat and look for bald eagles.  The sunrise over the trees is very pretty.

You can explore limestone caves at Indiana Dunes National Park or fossil beds at Falls of the Ohio State Park.  At Cagles Mill Lake you can spend the day fishing or bird watching.  Being outdoors can bring people together for a simple walk or a memorable vacation.  I am thankful for Indiana's great outdoors!

1859     The Indiana General Assembly passed legislation which created Newton County in the northwestern area of the state.  Named for John Newton, a Revolutionary War soldier, it was the last county established in the Hoosier State, making it the 92nd county.  The city of Kentland was designated to serve as the county seat of government.

1915     The Hoosier Poet, James Whitcomb Riley, boarded a train to travel to Miami, Florida, where he planned to spend the winter.  Newspapers reported that "Indiana's wintry blasts are too much for him these days, now that his health is not what it was."  Many of his friends gathered at his Indianapolis home on Lockerbie Street to see him off.

1933     Elmer Layden was appointed the new football coach at the University of Notre Dame.  A decade earlier he had been the fullback in the famous "Four Horsemen of Notre Dame" who had played for legendary coach Knute Rockne.  His hiring was the result of a shakeup of the coaching staff after a disappointing past season.  Newspapers reported Layden's salary to be $10,000.

1941     Japanese planes attacked the United States base in Hawaii.  This "day of infamy" led to the United States entry into World War II.  Hoosiers responded by going into uniform, buying war bonds, going to work in factories, and using ration books to conserve food and fuels.  More than 400,000 from Indiana served in the war.  Over 11,000 were killed.  Their names are enscribed on stone and bronze tablets on courthouse squares all around the state.

1954     Santa Claus began his annual visits to the Hoosier State.  Always an "early adopter," he sometimes left his sleigh at the North Pole and arrived by helicopter.  That's how he came to Beech Grove, where he landed at 5th and Main with a gift for every child.  As he flew over, he dropped balloons from the sky, each tagged with a card good for a special prize.

Say what you please about home, it's the only place in the world where they seem to know how to cook string beans.